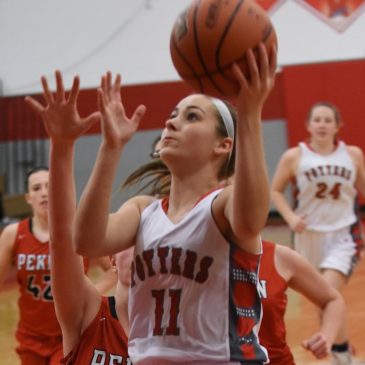 Winning Mid-Illini Conference Championships in 8 of the last 10 years, the Morton Lady Potters have proven to be the team to beat for the past decade.  They have been particularly dominant the last 3 seasons where the Potters won 12 games, 13 games and 14 games in 2015, 2016 and 2017 respectively.  Last Season (2017), the Potters were a perfect 14-0 in the Mid-Illini and have picked up where they left off by starting 5-0 this year.  The current group of Seniors (Class of 2018) are 44-3 (and counting) in conference play over the course of their Morton careers, and the Lady Potters have won 24 straight Mid-Illini Conference games.  The Lady Potter Varsity Sophomores

have never lost a conference game and the Juniors have only lost 1 conference game in their Varsity careers.  So you can understand if winning conference games is on the ‘to be expected list’ if you are a Morton Lady Potter.  Expected, but not taken for granted.

These Lady Potters don’t really pay attention to stats like these fortunately.  They have had this level of success, because they take the perspective that anyone can beat you on any given night if you don’t lace them up tight and come to play every game (a lesson learned in their last Mid-Illini Conference loss at East Peoria on January 2nd, 2016).  I believe that loss to East Peoria, has paid big dividends in terms of mentally preparing for every conference game since then.  The fact that they haven’t lost a Mid-Illini game since that time is the basis for my theory.  Of course the Lady Potters have also won 3 State Championships over that same period of time, so they are not only beating conference opponents, but their conference results have been particularly impressive.

So imagine you are a Mid-Illini Conference team and you see that your next game is against the Morton Lady Potters.  Unless you played on the Varsity team at Canton in the 2014-15 season or the Varsity team at East Peoria in 2015-16, you have never beaten Morton.  Morton is the 3x Defending State Champions and are 110-9 since over the last 3 seasons and some change.  They are hailed each year as the Conference favorites and have a roster full of conference superstars.  This is kind of like playing UConn if you are Northeastern Nevada State.  Well I imagine you could take 1 of 2 approaches to your game against the Lady Potters.  You could conclude that you are definitely outmatched and just hope that the coach doesn’t make you run a wind sprint for every point that you lose by, or you could make it your Superbowl game.  By that I mean you play above and beyond the energy level you normally play at, with more passion than you have ever played with and accept the mission impossible of knocking off the invincible Morton Lady Potters.

As far as I have witnessed, since the start of the 2016 season, most conference opponents have taken the later approach.  The more Morton wins, the more teams want to beat them and the target on their back grows larger and larger.  Teams come out screaming out of the locker room, like a band of banshees, and play the first 5 minutes of the game like they have never played before.  Then at some point in the game, Morton displays several bursts of runs that put the game out of reach and ‘voila’, same result as the last half dozen times you faced the Lady Potters.

These Mid-Illini teams are not bad teams.  To the contrary, there are some very good teams in the Mid-Illini that have won preseason tournaments and have won more than a majority of their games. Dunlap, Canton and Washington could be Sectional level teams.  They are good, but they just aren’t Lady Potter good. Morton is so strong at every position and they bring several players off the bench that would start for about any other school in the conference.  If it wasn’t for the political jockeying that goes on in the Mid-Illini coaches meeting at the end of the season, where each coach is lobbying to get one of their own players on all-conference teams, the 1st and 2nd Team All-Conference selections would be made up of at least half of the the Morton Lady Potters. But I’ll digress (for now).

Morton played Canton at Canton on Tuesday, December 19th.  Canton came into the game undefeated at 10-0 and feeling pretty good about their chances against the Lady Potters.  This Canton team was definitely using the 2nd approach mentioned above and were set to prove that they were ready, willing and able to take down the 3x Defending State Champs.  They packed their local gym (Alice Ingersol Gymnasium) for the game with rowdy townsfolk, parents and students , who didn’t want the to miss history in the making.  The local news reporter and photographer were in attendance, ready to document the triumphant night.  The night that the Canton Little Giants took down the State Champs.

Almost anyone that has had the ‘pleasure’ of playing Canton in Canton, knows that Canton gets some “benefits of the doubt” from the local officials. Those that their opponents rarely get.  In fact they are pretty infamous for this advantage and I have heard many people say that advantage is worth at least 10 points for Canton.  So if you are going to beat Canton, in Canton, you better be at least 11 points better and be up by double digits going into the 4th quarter.  Otherwise, the Canton factor can come into play.

Like most teams the Lady Potters have played this year, Canton jumped out of the gates playing with a lot of passion and energy.  They played Morton pretty close to even through the first half in fact.  They launched a lot of three pointers, and drove out-of-control to the basket time after time, hoping to get a foul called if their miracle shot didn’t drop.  Credit the Potters for staying composed and defensively efficient through the periods that Canton put together runs.  Both halves started with the officials (one in particular) rewarding Canton players for out of control play and penalizing the Potters in return.  Instead of letting that bother them, the Potters played their game.  Great ball movement, timely shooting of predominantly smart shots, unselfish play and solid defense eventually allowed the Lady Potters to pull ahead by 20 and they coasted through the final quarter.  Alas, the Canton faithful were foiled again by a score of 62-44.

Earlier that week, the Potters played an upbeat Pekin Lady Dragon team, that, like Canton, and Dunlap, came out with a lot of energy and were ready to take down the champs. They played the Potters even through the first 5 minutes. Then the lady Potters put on a couple 20 point runs that put away the Lady Dragons by the end of the 3rd quarter.  The final score was 72-36.

Next up for the Lady Potters is the State Farm Holiday Classic (in Bloomington Normal), which starts on December 27th and runs through December 30th.  This is a tournament that the Lady Potters have never won, but placed 2nd in last year and in 2015.  Always one of the most competitive tournaments in the country, this year’s State Farm Holiday Classic is once again loaded with talented teams.  Morton will start play

Merry Christmas Lady Potter fans!!!!  Enjoy family and friends over Christmas and then make the short car ride to Bloomington Normal on for the State Farm Holiday Classic and cheer the Potters to victory.  There should be a lot of very good basketball games played at the tournament this year.