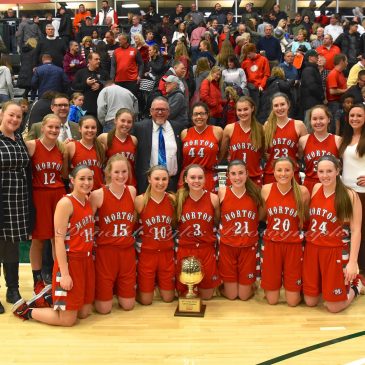 The Morton Lady Potters had a historic State Farm Holiday Classic (SFHC) experience this year. The SFHC is a 64 team tournament (32 Girls teams/32 Boys teams) and is a 4-day gauntlet of games, sponsored by State Farm, in Bloomington/Normal.  The tournament attracts some of the best girls & boys high school basketball teams in the state and the Lady Potters have participated in the State Farm Classic each year, since 2006.  Prior to this year, the Potters had been in the Championship game three times (2006, 2014, 2016).  Morton placed 2nd in each of those years and had never hoisted the Championship trophy… until now! 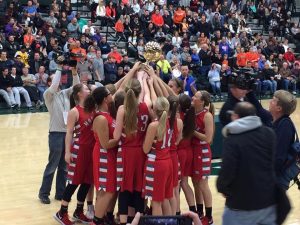 The Lady Potters started tournament play in historic fashion, by defeating Chicago North Lawndale (86-26).  They set all-time tournament records in their game vs North Lawndale for the ‘Most Points Scored in a Qtr (36pts)’, ‘Largest Margin of Victory (60 pts)’, and the ‘Most Consecutive Points Scored (48)’.  This was the same school, but not the same team, that Morton had faced twice two years ago.  Their first meeting with North Lawndale happened to be in the 2015 SFHC, where the two teams set another record for the ‘Longest Game Ever Played’.  That was a 4 OT thriller that went North Lawndale’s way.  Morton then beat North Lawndale, later that season, in the State Championship game.

In the Quarter Finals, the Potters faced a young, athletic and feisty team in the Normal West Wildcats.  With starters Josi Becker and Caylie Jones battling early foul trouble, Morton got a big lift from their first reserve players that helped wear down the Wildcat regulars.  Despite a few threats from the Wildcats, the Lady Potters maintained a lead though the entire game and Josi Becker helped cement victory making 8 of 8 free throws to close the game.  Tenley Dowell lead the Potter scoring with 17 points, and Josi Becker and Lindsey Dullard each added 10 points for the Potters, while Caylie Jones & Courtney Jones, combined for 13 points and 13 rebounds to help Morton defeat Normal West 63-49.

The Lady Potters would next play the Chicago St. Ignatius Wolfpack in the Semi-Final game.  St. Ignatius is a well coached, high energy, tough Class 4A team from the Chicago area and they were not about to back down against the Potters.  Every time Morton would begin to make a run, St. Ignatius would answer and did just enough to to hang around going into the final quarter.  Morton had enough of a lead in the closing minutes to play keep away from St. Ignatius and defeated the Wolfpack 51-38 to advance to their 3rd State Farm Holiday Classic Championship game in the last 4 years.  There they would face their first opponent of the year in the Normal Community High School Lady Iron.

Normal Community had beaten Peoria Richwoods 53-47 in their Semi-Final and have been playing very well throughout the tournament.  Anchored by a strong senior class, lead by Summer Stoewer (Sr), and Division 1 prospects Maya Wong (So), Abby Feit (Jr) and Kylee Schneringer (So), the Lady Iron are a formidable Class 4A opponent.  The Lady Potters know these players well and they know the Lady Potters as well.  The Lady Iron Seniors had never beaten Morton before and it was definitely on their bucket list.  Feit, Wong and Schneringer play on the same summer team and are great friends with Courtney Jones and Lindsey Dullard, so there were those bragging rights on the line as well.

The Lady Potters have the experience of playing in a lot of big games however, and were determined to not let this opportunity slip away from them.  The Seniors have had to settle for the SFHC 2nd place trophy twice before and watch someone else hold up the grand SFHC Championship trophy.  The Potters came out with laser focus in the first half of the Championship game and accurate shooting, unselfish play and execution on defense lead to a 15 point halftime lead.  The Potters extended the lead to as much as 22 points, early in the 2nd half, but much like the first game of the season, the Lady Iron started chipping away and building momentum.  Once the momentum shifted, every call seemed to go against the Lady Potters and in favor of the Lady Iron and Maya Wong, who had only 1 point until late in the 3rd Qtr woke up, scoring 10 of her 11 points in the final 10 minutes of the game.

Normal battled all the way back to within 5 points late in the game, but Morton stayed composed through the adversity and did what 3x State Champions do.  They only took good shots, trusted in their game plan and in each other, and made free throws and layups in the game’s closing minutes to capture their first ever State Farm Holiday Classic trophy, winning 61-56.

There were a lot of heroes in the game for both teams and the Lady Potters had a monster stat line from Sophomore Lindsey Dullard, with 18 points, 10 rebounds, 3 blocks.  Caylie Jones made 6 of 7 attempts for 13 points and added 4 assists while taking 2 charges defensively.  Tenley Dowell added 12 points, including a huge drive for a layup late in the game that stalled Normal’s ferocious comeback attempt and was selected to the SFHC All-Tournament Team.  Josi Becker once again stepped up and knocked down huge free throws at the end of the game to secure the win.  Becker finished with 10 points, 5 rebounds & 5 assists and Kassidy Shurman hit 2 big threes.  Abby Feit (Normal) led all scorers with 19 points, but the Potters limited the University of Evansville recruit to only 3 rebounds.

Once again the Morton Community and Potter fans really stepped up big time to come and support the Lady Potters in the Championship game and throughout the tournament.  The Lady Potter “Storm Troopers” braved freezing temperatures and terrible travel conditions to come cheer on the Potters.  Thank you to all Potter fans for supporting the girls! 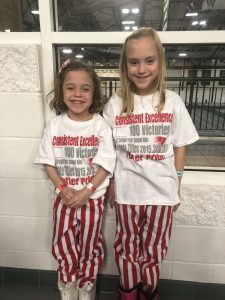