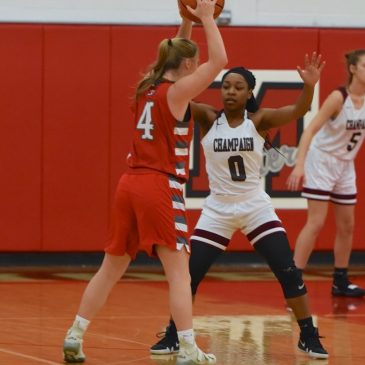 The Morton High School Lady Potters began their Thanksgiving Tournament by winning two laughers today, 68-18 in the morning and 62-32 in the afternoon session. We’ll get to a few details. First I want to make an exception to my general rule of not clogging the blog with names of players on the other teams, meaning girls so unfortunate as to not be Potters.
We must talk about Jayden Wilson, a sophomore at Champaign Central, the second-game loser. She’s a 5-foot-5 firecracker. To say she is quick is to understate her speed. She’s one of those hell-for-leather sprinters who get where they’re going before they know where they’re going. As a result, more than once today she rocketed past the rim on a fast break before thinking to shoot. ‘Twas the kind of shot that goes UP through the net and out the top. Ought to be a deduction of two points.
Anyway, I loved watching her. Completely out of control. Manic to the max. You’ve seen a balloon, stretched with air, go in eight silly directions at once when you let go of it. Put it in a white Champaign Central basketball uniform, give it number 0, and it’s Jayden Wilson bouncing off the walls of the Potterdome.
She scored some points and got some rebounds and I have no idea how many of either, and I really don’t care, because, hey, her team lost by 30 and would have lost by 300 if Morton’s coach, Bob Becker, wanted to win by 300. Instead, Becker used everybody on his bench – all 14 players – and I swear he sneaked a peek at people from the third row of the bleachers, such as my buddy Joyce Domnick and me, who together are old enough to have been born before the Civil War.
Anyway, getting back to Jayden Wilson, it wasn’t just her speed that caught my attention. It’s what she did when Becker called two of his players over for a talk during a Champaign Central free throw.
As Tenley Dowell and Maddy Becker walked over to the coach, so did Jayden Wilson. As Dowell and Becker stood maybe five feet from the coach, so did Jayden Wilson. As Dowell and Becker listened to the coach’s instructions, so did Jayden Wilson.
It would seem to be against some kind of rule, that a player from the other team can’t listen to the opposing coach’s instructions to his players.
But it wasn’t a timeout. It was one of those casual meetings of a coach with a player or two. Nothing official. No reason why a girl in a white uniform can’t mix herself into the girls in red uniforms.
So Jayden Wilson did it, as, by her telling, she has done it before.
“I just listen for the game plan,” she said afterwards, “what they intend to do, what changes they might make.”
The best part is mental.
“Me being there like that, it gets into their heads, like, ‘What’s she doing here?’ It throws them off their game. The coach sometimes, too. He made eye contact with me.”
Bob Becker saw Wilson and another Champaign player there. More than anything, he was amused. After all, Wilson could have learned no secrets that would have turned the game around. It was early in the third quarter and Morton led, 53-11.
In both games today, Morton was sensational against mediocrities. It led 28-4 after a quarter with United Township and 27-7 after a quarter with Champaign Central. The leads were built with a transition game that turned stops, steals, and rebounds into fast-break layups. The Potters made nine 3-pointers in the first game, five in the second.
Dowell and Lindsey Dullard led Morton’s scoring. Dowell had 16 and 14, Dullard 15 and 14. By day’s end, all 14 Potters had scored.
Meanwhile, defending Class 3A state champion Peoria Richwoods also won runaway victories, over Bishop McNamara and United Township. Barring upsets Saturday morning, Morton and Richwoods will be 3-0 in tournament play and meeting for the championship at 5 o’clock.
One thing is certain about that game. It will not be a laugher.