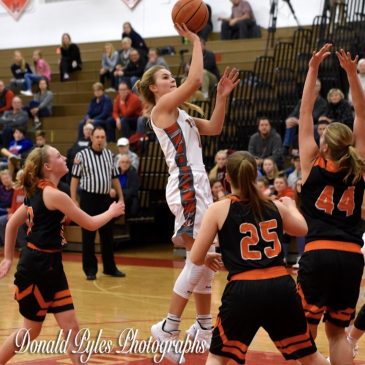 For a minute and a half tonight, the Potters were perfect. Ninety seconds on the game clock. Doesn’t seem like much. I’m here to tell you it’s 87.6 seconds more than most basketball teams ever get. In those perfect 90 seconds, the Potters caused me to make two notes: “Killing ‘em” and “Like 7 guys.”

In those 90 perfect seconds of the third quarter, the Potters’ killing-‘em offense was so good it scored every which way on a 12-0 run that produced a 49-20 lead over a decent team (7-2 coming in). In those 90 perfect seconds, the Potters’ like-7-guys defense was so good that Washington must have felt like just handing the ball to the nearest Potter rather than be embarrassed by having it stolen yet again.

Actually, that last thing – handing the ball over – kinda happened. In the second quarter, a Washington player had the ball out of bounds at midcourt. She could find no one open. She had the clever thought of bouncing it off a Morton defender. Only instead of doing the clever thing of bouncing it off Tenley Dowell’s knee, she chucked it at Dowell’s mid-section. Dowell caught it. Just caught it. Here’s what Dowell thought at that moment, “OK, easy layup.”

Sometimes, in practice, coaches will run six or seven defenders against the offense. The idea is to make life miserable for ball-handlers. That’s what the Potters did to Washington tonight, only they simulated the seven-defender defense with only five players. But those five were everywhere, stopping dribblers, cutting off passing lanes, deflecting passes, knocking the ball out of everyone’s hands, generally picking their pockets in broad daylight. Life was made miserable for any poor Washington girl who ever thought she liked basketball.

“In the second quarter and part of the third,” Dowell said, “we were OK on defense. But earlier we didn’t have enough intensity.” Such are the thoughts of a team that is 9-1 for the year, 3-0 in the Mid-Illini Conference (and on a 35-game M-I winning streak). Sometimes, after all, 90 seconds of perfection is just not enough.

The Potters led after one low-intensity quarter, 15-10, and were up 33-16 at halftime. Intensity arrived with 5:40 to play in the third quarter when Katie Krupa’s rebound bucket made the lead, 39-20.

Then it happened, Morton killing ‘em on offense, making life miserable on defense.

Dowell sprinted the length of the court, made two long sidestepping moves between two defenders for a powerful, elegant layup.

Lindsey Dullard, working in the post, scored in close.

Twenty seconds later, on a nifty entry pass by Bridget Wood, Dullard did it again and added a free throw.

Wood then made a 3-pointer with 4:10 left in the quarter.

“We turned our defense into offense,” Dowell said, meaning that every good thing defensively led to a good thing at the other end, a transition game that when it’s running smoothly is a beautiful thing to see.

As for FREE ICE CREAM! or even FREE CUSTARD! from Cukver’s, the Potters did not reach the magic 10 3’s tonight. They had seven, two apiece from Dullard and Wood, and singles from Dearing, Jones, and Becker.

Incidentally, it was 57-27 after three quarters, again making the fourth quarter a running-clock quarter. It’s an Illinois High School Association rule this season – a 30-point lead after three means there’s no clock-stopping in the fourth save for timeouts and injuries. Morton has played running-clock games now in four of its last five games, the exception being a game in Wisconsin, a state so unusual they play 18-minute halves instead of four eight-minute quarters. They also wear cheese on their heads.

The running clock, by the way, did give Morton’s coach, Bob Becker, a talking point for his reserves who generally work those fourth quarters.

“We gave up 20 points on a running clock,” he said, meaning the Potters lost the fourth quarter, 20-8.

It is a trend, perhaps not a worrisome trend, but coaches of 9-1 teams who build 30-point leads need things to worry about, so Becker does have one troubling, trending statistic to consider. In six running-clock fourth quarters this season, the Potters have lost the quarter five times. They have been outscored, 62-36.