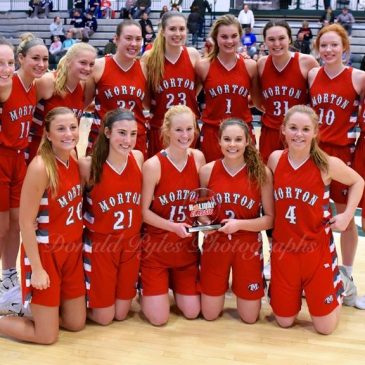 2018 is in the books and the Morton Lady Potters (15-2) have many great moments and memories to look back on. The State Farm Holiday Classic (SFHC) (which falls between Christmas and New Years Eve) has served as a mid-season test for the Lady Potters each year, dating back to the 2006-07 season.   Entering the 2018 State SFHC at 12-1, the Lady Potters had more than taken care of business on all but one occasion this season and was really only challenged twice.

Coming off last year’s 31-2 season, the Potters were a combined 43-3 since the start of the prior season and hadn’t lost a Mid-Illini Conference game in over 1,070 days.  That’s pretty good right?  Well, of course it is, but yet even with that dominance, there was still an aura of incompleteness that could be sensed from many Potter fans.  I guess that will happen when your team wins 3 straight State Championships, goes 131-10 over 4 years, but finally lose a post season game in the Sectional Final (February 2018).  Combine that broken post season streak with the fact that all 3 of those losses of that 43-3 record, came from one team (Peoria Richwoods), the most recent in a double OT loss to the Knights on November 24th, 2018 (just one month prior).

So the Lady Potters, with all their dominance, had those demons staring at them as the entered the 2018 SFHC.  The Potters had been ranked with the #3 seed in the tournament, which was arguably the strongest SFHC field of all time and one of the very best and most competitive Large School Girls tournaments in the Midwest.  #1 Peoria Richwoods, #2 Union H.S. (Ryle, KY), #4 Rock Island, #5 Bethalto Civic Memorial, #6 Chicago Simeon, #7 St. Ignatius, #8 Geneseo, #9 Chicago Kenwood  and #10 Normal Community, all came in State ranked 3A & 4A teams that were very capable of making a run in this tournament and winning the whole thing.  There were over 20 likely Division 1 players participating and even teams #11 – 16 included some good teams.  #11 Normal West will likely compete for a top 3 standing in the Big 12 Conference and #15 Canton is strong enough to finish in the top 3 of the Mid-Illini Conference this year for example.  That in itself gives you some idea of how strong the SFHC Large School Girls Bracket was this year. 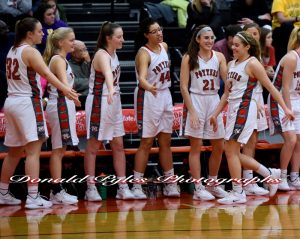 As it turned out, the SFHC Seeding Committee did an excellent job with the seeding these 16 teams as almost every team finished the tournament within a spot or two of their original seed.  Seven of the eight higher seeds won in the first round and the #8 seed (Geneseo) lost to the #9 seed (Kenwood) in the only upset of Round 1.  All four of the top 4 seeds, Richwoods, Union (KY), Morton and Rock Island advanced in the Quarterfinal round, although there were some closely contested games on Day 2, which would be expected with this level of talent.  Both Semi-final games were great games with the lead changing throughout the game in both games. Many were expecting a possible Championship match-up between Morton and Richwoods, but those people were only half right.  They did get the match-up, only it was in the 3rd Place game and not the Championship game, as Morton fell to the #2 seed (Union, KY) and Richwoods fell to #4 Rock Island.  Morton outlasted Richwoods to take 3rd Place and Union, KY ran past Rock Island in the Championship Game.  All of these games were great high school basketball games to watch and showcased some of the very best teams that you will see this year.

Here are some of the Morton Lady Potter video highlights from the 2018 State Farm Classic:

The Lady Potters played very well at times, in each of the games at the SFHC, but struggled putting together 4 strong quarters of team basketball.  In their first game vs. Wheaton Warrenville South, the Potters struggled to get the ball in the basket in the 1st quarter, but raced out to a large lead through the rest of the game with excellent team basketball.  The Lady Potters were the taller, more athletic, more experienced and better skilled team in this game and cruised to a 50-27 victory and on to the Quarterfinals 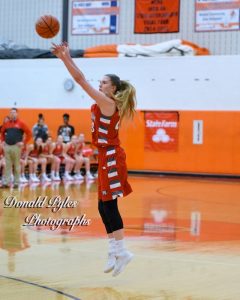 The Potters were bolstered by Maddy Becker’s 7 threes in Game 2, but struggled to rebound the basketball through much of the 1st half vs the much taller and athletic Chicago Simeon team. They were challenged mid-game by Coach Becker to prove they weren’t as soft as they had been playing.  The Lady Potters 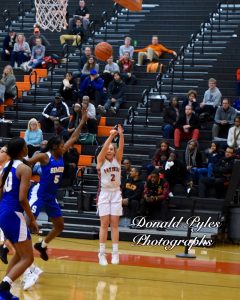 responded and showed a lot grit and teamwork to pull past this strong Simeon team and into the Semi-final by a score of 64-54.  A side note on Simeon – The Simeon Wolverines are T-A-L-L (TALL).  Seven of their eleven players are listed over 6 foot.  To emphasize this fact to their opponent, the Wolverines enter the gym by running down the court in a single file line and takes turns slapping the back board.  That is something you don’t see every day in a girls high school basketball game.

The Semi-final game vs Union-Ryle (KY) started out great.  The Lady Potters were hitting shots, getting to loose balls and won the first two quarters with great ball movement and good teamwork.  However, about midway through the 3rd quarter the Potters went on a dry spell and the nationally ranked talent from Ryle, Kentucky took advantage of turnovers and missed opportunities by the Lady Potters.  Union-Ryle came into the tournament as the #1 team in Kentucky and #16 ranked team nationally according to MaxPreps.  They showed a little bit of why they are so highly thought of.  They reminded me quite a bit of one of the elite level AAU teams we see in the summer, with their speed, shooting and ball movement.  If you blink against those teams, they will bury you quick.  The Lady Potters stayed within 4 points until late in the game, when they were forced to foul, but weren’t able to get over the hump on this night as the Potters fell 51-62.  Both Simeon and Union Ryle provided great opportunities for our Lady Potters to improve though.  You have to play and compete with teams like that to prepare for a successful post-season. 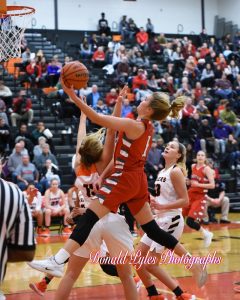 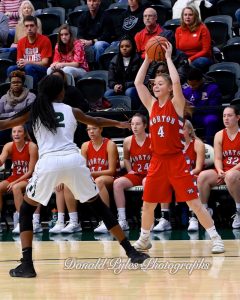 So the Lady Potters would advance to the 3rd Place game and face Peoria Richwoods on Championship Day (Day 4).  I heard some disheartened comments from Potter fans about the mid season matchup, but I kind of looked at it as a chance to face those demons that had haunted the Potters for the better part of 2018.  The feel of the game though was not what many expected.  It was not nearly as amped up as a Championship game, though there were quite a few in attendance.  The players on both sides seemed rather relaxed and it started out like a Sunday morning league game, rather than a matchup of two of the best programs in the State.  The Potters jumped out quick and played under control.  They hit some shots, took some shots and played three very solid quarters to take a 16 point lead on the Knights with about 6 minutes left in the game.  Then much like it did the night before against Union-Ryle, the wheels started to come off.  Players didn’t seem on the same page, and turnover, missed free throws, poor decisions and momentum turned against the Potters.  Lindsey Dullard had fouled out, Richwoods was in high frenzy mode and every call seemed to go against the Potters.  Those demons were screaming pretty loud.  However, when it looked like Morton would succumb to the pressure and frenzy, up stepped freshman Katie Krupa, who knocked down two big free throws, with 5.7 seconds left, that left the Knights only a desperation heave at the buzzer. More than anything, there seemed to be a sense of relief when the buzzer sounded.  A collective exhale from the Potter faithful. 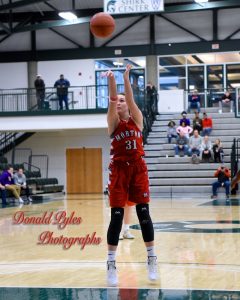 I’ll tell you one thing though, I don’t think 3rd Place ever felt so good to many of these Potters.  Placing 3rd in this year’s 2018 State Farm Holiday Classic is a pretty nice accomplishment, considering the 16 teams that made up this SFHC field.  What 2019 will bring, is anybody’s guess.  I think there is a sense of renewal though in the Lady Potters mindset.  A new opportunity to be the best they can be and take head on the challenges that wait ahead.  Thank you to the State Farm Holiday Classic for the opportunity for improvement.

After going 3-1 at the SFHC, the Lady Potters improve to 15-2 on the season and enter 2019 with a pretty good understanding of what they need to work on the most.  Morton next plays Friday, December 4th at East Peoria, to resume Mid-Illini Conference play.  The Potters currently lead the MI Conference with a 5-0 record. 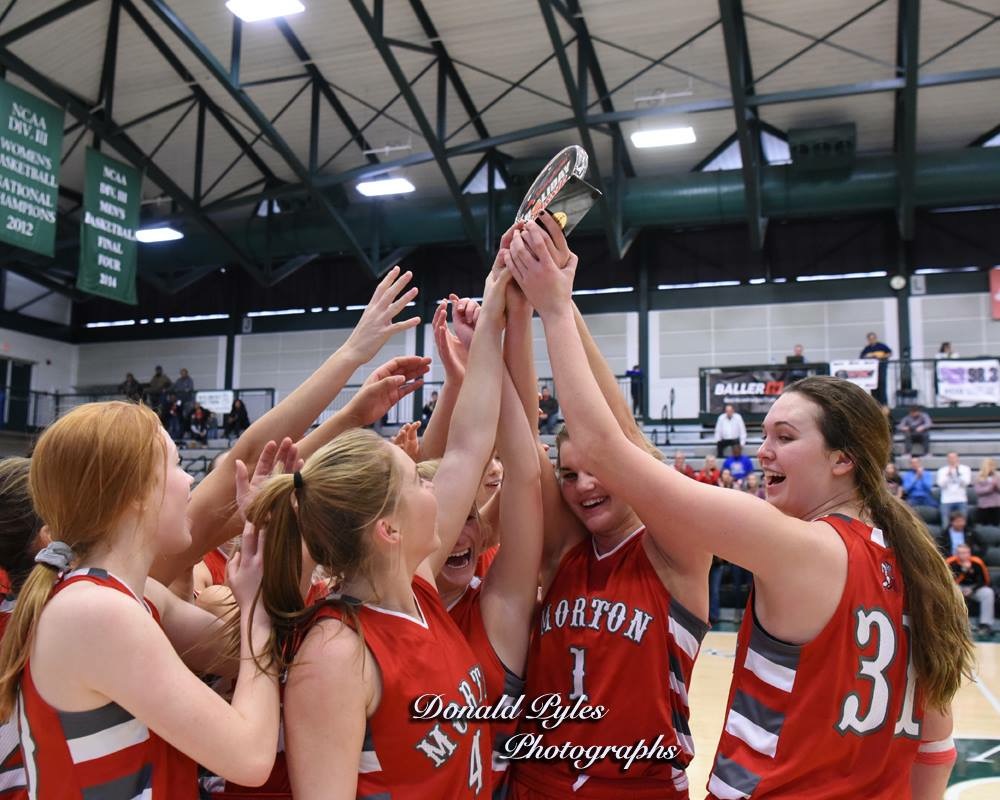