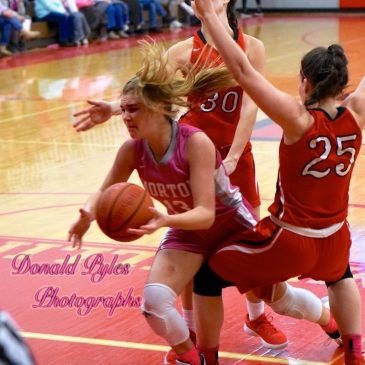 I love Pink Night. We pray for our loved ones and we give thanks for those who have survived cancer. Tonight the Lady Potters presented a $5,000 check to the CancerCare Foundation. Players in uniform climbed into the Potterdome bleachers delivering pink roses to survivors among the 1,000 spectators. On the video board, it was 2013 again and there was Mary Schultz, the Team Mom in the last winter of her inspiring life, wearing her official scorer’s striped shirt, singing the Star Spangler Banner.

On this night, there were cheerleaders and there was the high school dance squad, 17 girls strong, doing its happy thing, and the pep band musicians, all in pink, stopped their music to chant, “Kath-RYN Rei-MAN! . . . Kath-RYN Rei-MAN!”

I asked the Lady Potters’ junior guard why that happened.

Yes, Pink Night in the heartland. The best of America.

Again, the Lady Potters won easily over a Mid-Illini Conference opponent once thought to be a challenge. The only question was when they’d get a 30-point lead and invoke the running-clock mercy rule. Well, I say it was the only question when, really, my primary question concerned Tenley Dowell’s well-being.

Metamora’s defensive strategy against the Potters’ senior star was simple. Beat her up. Knock her down. Hammer her on every shot. Tackle her if necessary. At game’s end, I told my buddy, the photographer Don Pyles, “I’ll write about the way Metamora hacked and bumped and knocked Tenley Dowell around. That’s the picture to go with the blog.” Don said, “I’ll see what I’ve got.” What he had, as you can see on this page, is the absolutely perfect picture of Dowell’s night. Her hair is flying sixteen directions. She is about to crash-land a nano-second after tossing the ball toward the hoop. Look at that picture again. Really look. If you didn’t know this was basketball, you might swear she’s being tackled by a Metamora linebacker.

All night long, it went on. Maybe five, six times, the referees called fouls away from the ball on Metamora players who threw themselves into Dowell’s path. Maybe a dozen other times, they called nothing. All night long, every time Dowell thought to slash through Metamora’s defense, with the ball or without the ball, Metamora’s strategy was to . . .

“They’d be bumping into me, holding me, grabbing my jersey. Everywhere I went, they did it.”

Football coaches have this drill where they give the ball to a guy and send him through a gauntlet of players trying to knock the ball out of his hands. Dowell’s night was a fumble drill. The wonder is, she didn’t seem to mind.

“Tenley does a great job of keeping her composure,” her coach, Bob Becker, said. “She doesn’t cry, she doesn’t say anything to the referees, she just keeps playing. That’s the way the great ones do it.”

This is not to suggest we should feel sorry for the Potters or for Dowell. Morton is now 22-2 for the season and at 10-0 in the Mid-Illini Conference is on a 43-game winning streak in the league. The Potters can take care of themselves. So can Dowell. She’s a big-time player, tall, lean, and strong. I was, in fact, reminded of how big and strong she is by a Facebook post the other day.

The post showed a 2011 summer travel team that was said to include the future Potter state champions Caylie Jones, Josi Becker, and Tenley Dowell. I recognized Jones and Becker. But Dowell? I needed a friend to point her out. I said, “THAT’s Tenley?” She was small, even tiny, considerably shorter than the then-and-forever small Josi Becker. “That was before the growth spurt,” my friend said with a laugh, for Dowell is now a 6-footer who takes no prisoners.

Those last few words are a touch strong. They suggest that Dowell – who will play next season at Butler University – comes ready for war. More precisely, she’s never an aggressor but she absolutely takes whatever the enemy dishes out and comes back for more.

“I’ve kinda gotten used to it,” Dowell said, for she knows that if an All-State player earns a reputation for elegant moves to the rim, that player is going to run into lesser athletes who have given up on finesse and rely on force. “Richwoods does it to me, too, but I think Metamora did it more tonight than anybody.”

Like a few Mid-Illini teams, Metamora hung around for maybe half of the first quarter. It trailed then, 14-7. But in the next 4 four minutes and 49 seconds, the Potters went on a 16-2 run that established exactly who was in charge here. Five different Potters scored in that run, everything coming off the team’s relentless movement at both ends. I doubt there’s anybody in Class 3A that does transition basketball better than these Potters. Perhaps we’ll find out in the next month leading to the Final Four at Redbird Arena.

Lindsey Dullard led Morton’s scoring tonight with 18. Maddy Becker and Dowell had 11 each, Courtney Jones 10. Raquel Frakes had 7, Bridget Wood and Megan Gold 4 each, and Olivia Remmert and Makenna Baughman 2 each.