This is as good as girls basketball gets. Two of the state’s best teams created a double-overtime drama. We’ll get to the details. First, that shot by Courtney Jones.

There were 2 ½ seconds to play in the first overtime. Bob Becker crouched before his team and said they’d run a last-hope play they call “ka-ching.” They had practiced it just the day before. Down 59-56 and taking the ball out at the far end, a team with 2 ½ seconds to play has one chance to tie the game. It’s a slim chance. It is, mostly, no chance at all.

On the bench, Courtney Jones knew “ka-ching” was on her.

Katie Krupa would throw a long pass, past midcourt, a pass that is made with one hand, not an easy thing to do with a basketball, and Courtney Jones, backing out of the center circle, would catch the pass.

As the team listened to Becker’s plan, Lindsey Dullard reached over and patted Jones on the back. She said, “Let’s go, Courtney Jones.”

At midcourt, setting up for the long pass from Krupa, Jones looked back at the bench, at her coach, Bob Becker, and here’s what she did at that moment. She smiled. This was on her. She’s got this. She can do it.

“Then Katie threw a great pass,” Becker said. “She could play quarterback in the NFL.”

As Fremd seemed about to intercept the pass, the player stumbled. The ball glanced off her hands. Jones didn’t catch the ball in the air, but picked it up on the first bounce.

She turned to the basket, took one step, maybe two, things happening fast now, the 2 ½ seconds disappearing, Jones near the 3-point line with no time to square up for a legitimate shot.

“So I just layup’d it, almost,” Jones said, meaning that she put the shot in the air off her left foot, running and shooting from her hip, a slingshot throw more than a shot and . . .

“Oh, my gosh, I couldn’t believe it,” she said, because, as the backboard’s red lights flashed on saying time was gone, Jones’s shot hit that backboard and ricocheted into the net.

Alas, for all its wonder, for all the raucous celebration the Jones shot set off, the Potters did not score at all in the second overtime.

Bob Becker wanted a test for his Potters. He got it. Up by 15 points early against the Class 4A power (now 25-4) from the Chicago suburbs, still ahead by seven with 5 ½ minutes left in regulation, the Class 3A Potters (now 23-3) missed two shots to win at the first buzzer, needed Jones’s hero shot to tie it at the second buzzer, and then, worn out, lost for the first time since Christmas week.

Like all good coaches with good teams, Becker plays a long game. It’s nice to win in January. Nobody throws W’s back. But when you’re the Potters and you’re winning by 30 most nights, you’re not learning to produce under pressure that frightens you, tightens your throat, and causes your hands to go weak and sweaty. There’s no place to hide in such games, so you better get used to playing them if you want to win them. It’s Becker’s plan to have his team at its best when it means the most, which is in February, which is when the state tournaments begin those win-or-go-home games that define seasons for programs such as Morton’s.

So last fall when he needed another game to fill out the Potters’ schedule, he didn’t go looking for a cupcake. The Mid-Illini Conference supplies plenty of pastries. Becker wanted a game that would tell his team what it needed to win its fourth state championship in five seasons.

For a half, the Potters had everything a state champion must have. It led 35-20 with 1:38 left in the second quarter. That lead was built on remarkable outside shooting – Dullard with three 3’s, Tenley Dowell with two 3’s, and Maddy Becker with one. Of Morton’s 12 first-half buckets, then, half were from behind the arc. For Fremd’s coach, Dave Yates, proud of his team’s defensive skills, “Giving up 35 points in the first half was disheartening.” Then, asked what he liked most about the Potters, he said, “The way they shot it.”

An omen of trouble ahead may have come in that last minute of the first half. Fremd made two 3-pointers in that minute to cut the Potters’ 15-point lead to nine. By the end of the third, Fremd’s defense had asserted itself. Morton scored only nine points in the third, and only two in the last five minutes of the quarter.

Still, Morton led after the third, 44-4l, and moved in front 50-43 on Dowell’s three-point drive-and-free throw and Dullard’s fifth 3-pointer of the game. From that point on, with 5:49 on the clock, the Potters did not score in regulation time. It did have two chances to win. After working nearly a minute for a last shot, Morton got down to the final five seconds. Jones missed a 3-pointer from the deep left corner. Maddy Becker grabbed the loose ball and hurried one up from six feet that bounced away at the buzzer.

Primarily, Fremd’s defense won this one by clogging the lane with two and three defenders anytime Dowell and/or Dullard thought to attack the rim. After that dozen field goals in the first half, Morton managed only five in the second half and two in the overtimes, one of those the Jones answered prayer.

Fremd’s Yates also credited his team’s depth as a decisive factor. Morton seemed worn out late. It has not been pushed that hard for a month and more. In the first overtime, for instance, Fremd made 6 of 8 free throws while Morton made only 4 of 9. (For the game, Fremd made 21 free throws to Morton’s 8.) 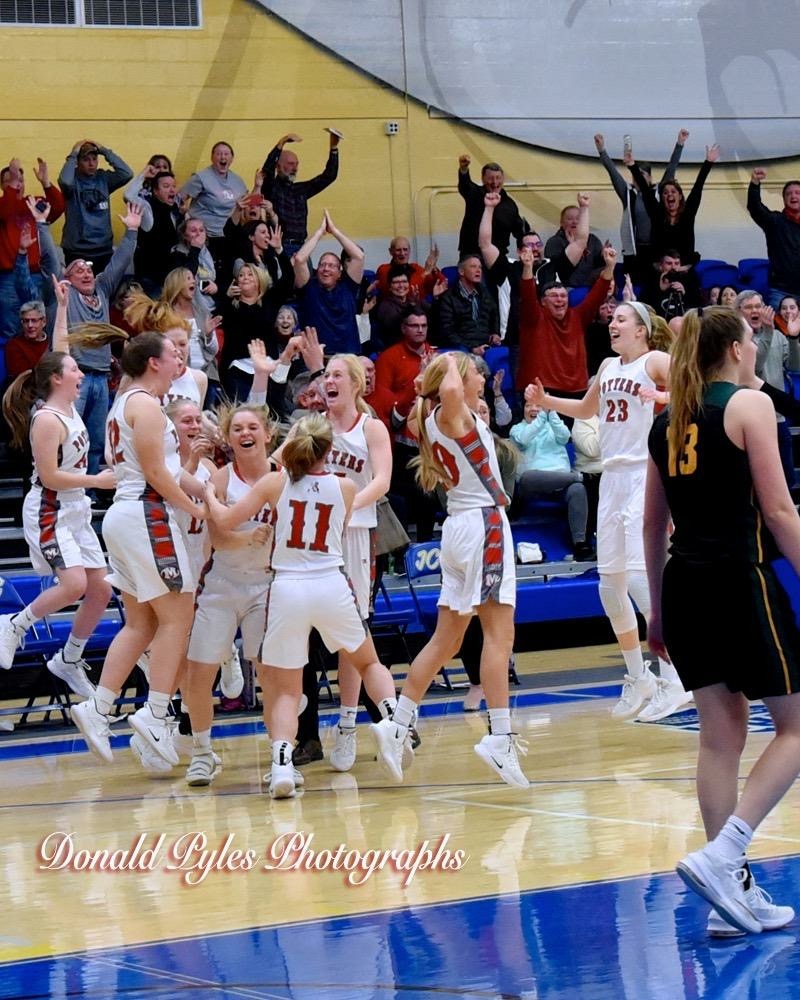