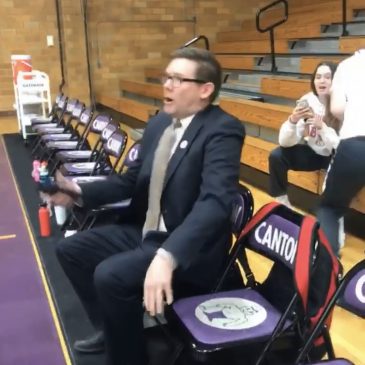 Eleven days in the planning, it happened tonight. What the girls dreamed up at Cracker Barrel, they made real tonight. It began in the Cracker Barrel gift shop on January 26 after the Potters’ Pink Night game. It began when Courtney Jones and Katie Krupa saw this thing. It didn’t cost much, maybe $2. They had to have it because they knew what they would do with it. They had a plan.

Do you know how long 11 days is in the life of teenage girls with a plan? It’s 10 days longer than forever.

But they waited because they wanted to pull it off perfectly. They wanted the maximum reaction from the man who was the target of the plan.

And I will tell you about it right after I tell you about the basketball game in which the Potters led after a quarter, 34-10, led at the half, 58-22, and caused their coach, Bob Becker, to say when it was all done, “That was so fun.”

They made their first 10 shots of the game, five of them 3-pointers by four different shooters. In three minutes and four seconds, it was 15-0. At that rate, Morton wins 156-0. They did it with a full-court press that bedeviled, bewildered, and baffled Canton’s ball-handlers. They did it with a whirlwind of a transition game that transformed every steal and turnover into a bucket. Against the second-best team in their conference, the Potters played with cool precision at both ends. Think of the Golden State Warriors, only with ponytails.

I will wait while you read that paragraph again.

Early in the going, Becker heard a Canton fan shout out from the other side of the grand old Alice Ingersoll Gymnasium.

“Take the press off, you jerk,” the fan said.

What? Canton is pretty good. And a fan is whining? The philosopher didn’t know that Morton’s good players play hard because that’s what good players do all the time or they wouldn’t be good players. The Potters are now 25-3 for the season, already the Mid-Illini Conference champs at 13-0 and on a 46-game winning streak in the league. Perhaps the whining fan would have liked new rules for the Potters. Like, they must wear combat boots and boxing gloves. Y’know, to make it fair. Also, blindfolds.

It took 11 days because a whoopee cushion ambush requires planning.

Especially when the target is your coach.

But once Courtney Jones felt the first stirrings of glorious mischief, there was no turning back. As she put it, “Oh my goodness, we have to do this!”

But one game passed. Another passed. A third. After Canton, there was only Senior Night this Friday at the Potterdome. It wouldn’t be appropriate on Senior Night to prank the coach with a – what to call it? – with a – let’s call it a device – that Wikipedia says is also known as a “windy blaster and Razzberry Cushion.”

It had to be tonight.

Before the jayvee game, with the varsity players in their warmups in the bleachers, the mischief began when they saw Bob Becker sitting on the bench.

He had to get off his rear end for this to happen. He had to leave his chair unguarded.

“So we asked Coach if he could dance, could he show us some dance steps,” Jones said. “He got out on the court and did, like, some country dance thing. And when he came back to sit down, I hurried and sneaked the cushion under him.”

There is video of this moment in Lady Potters’ history.

It shows Becker lowering himself onto the bench.

Then it shows Becker leaping off the bench and looking behind him to see what just happened.

Laughter ensued and then it ensued some more and I heard it from the other side of the building and I thought someone had just done the funniest thing that had ever been done, which, as it turned out, was just about right. A basketball coach in his 20th season sits on a whoopee cushion and joins his players in waves of laughter that tell you everything you need to know about that team’s character and personality.

“You, Courtney Jones, I’m going to get you,” Becker said, and Jones hurried out of the gym, headed for the team bus, laughing in the rain.