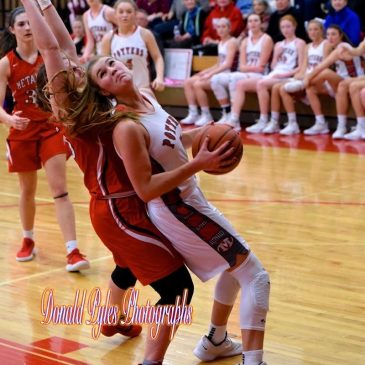 Not to say Bob Becker was all fired up early, but we’re five seconds into the Potters’ first possession when the coach is off the bench with something to say to his team.

“Give it to HER,” is what he says, and we’re 10 seconds into the possession against a team that Morton has beaten twice this season by an average of 30 points. Metamora had scored first, a free throw. Still, nothing to worry about here.

So we’re 15 seconds in, Metamora has a 1-0 lead, and Becker wants someone, anyone, to pretty please make an entry pass to his post player, the freshman Katie Krupa.

“GIVE IT TO HER!” the coach says, disdaining decorum in favor of going all-caps.

Which is pretty much how Krupa came to score Morton’s first bucket, a power-move layup with her left hand, and the Potters did to Metamora what they’ve been doing to most everyone lately. They ran them over and then they backed over them in order to run them over again to make sure they’ve been run over but good. By quarter’s end, it was 16-6, halftime 32-13, and five minutes into the third, 40-13.

Only once in that time did Becker have reason to leap from the bench and stomp-romp-rip off his suit jacket and fling it to the floor, a dance step which, if God is good, someone caught on video and will play alongside the country music lyric that goes, “She took my heart out and stomped that sucker flat.” As to what caused this performance of the Becker Boogaloo, methinks he thought unkindly of a referee. I’m not sure. And I really don’t care. The greater point of all this is that these Potters, players and coaches, are kicking butts and taking names.

Metamora is a decent team. Thee Redbirds came in with a 21-6 record. It has size, skill, experience. It plays physically, willing and eager to bump bodies from end to end. Two weeks ago, they trailed Morton by only three points early n the second half of that 32-point loss. So they can play some – not that you’d have known it tonight, for tonight the Potters’ showed us they could beat the Redbirds any way they chose to be beaten – by transition basketball at its runningest-best, by defenses so good that it seemed unfair that the Potters would throw in a triangle-and-two just to confuse everyone. More important than fast breaks or trapping defenses, the Potters showed us something that will be an absolute necessity very, very soon.

They showed toughness. Call it grit. Call it no-back-down. I know, I know, they’re your cute sisters, your sweet daughters, your loving grand-daughters. I’m here to tell you they’re sweetie-pie killers. I once wrote about a teenage tennis phenom named Tracy Austin. I called her a “killer in pigtails.” Her mother complained. “Those aren’t pigtails, they’re bunches,” she said. She liked the killer part. I love these Potters, each of them sweet except for those moments when you have the basketball and they want it, Then they remember what Bob Becker wrote on his whiteboard and showed them in the locker room before the game.

Which leads to runs such as the Potters’ 16-0 move late in the first half and early in the second. They were up comfortably, 24-13. Seven minutes and 35 seconds later, it 40-13. Lindsey Dullard started it with back-to-back 3’s and a layup. Tenley Dowell came with a 3, Krupa with a 15-footer – and here came Becker again, “KATIE, GET THAT!,” meaning intercept a pass, her deflection being just as good – followed by two Dowell free throws and one by Peyton Dearing.

On Valentine’s Day, no less, they’dThey’d taken the Redbird’s heart and stomped that asucker flat.

Next week, most likely, the Potters will play Peoria Richwoods, the defending state champions. They’ve played the scratching/clawing/powerful Peorians twice this season, losing the first time in double overtime, winning the second by a point. They could play for the Chillicothe sectional championship. As was true a year ago, it’s true again. The winner of that game should win the state championship.

If a Richwoods game comes, the Potters are ready.

“We played with a lot of energy and intensity tonight,” Dowell said.

“I knew I had to attack the basket,” Lindsey Dullard said.

“We played like it was the last one we’d play,” Courtney Jones said.

“This team truly has an ‘it’ factor,” Bob Becker said. “Whether that means we win a state championship, I don’t know. But we’re playing a very high level and very consistently at the right time.”