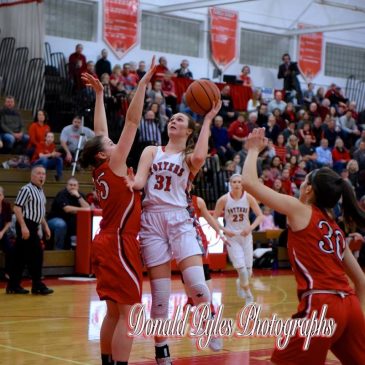 I sat three rows behind the Morton bench, which meant I sat in the Peoria Richwoods’ fans’ section in the Illinois Valley Central High School gym. It also meant I sat alongside Richwoods players who, after their cakewalk in the night’s first semfinal, had stayed to watch Morton. So I can report that the loudest cheer I heard all night came at the buzzer ending the first quarter of the Morton game.

That’s because it came directly into my good ear from the Richwoods players. It came when a Canton player threw one in from 35 feet. I made a note of that moment when the 3-point prayer cut Morton’s lead to 37-25. The note: “Rwoods plyrs up + loving it.”

A friend from the Washington Post, with me on a busman’s holiday, asked, “Are they cheering because they don’t want to play Morton?”

Maybe. They lost to the Potters by a point just after Christmas after beating them in double overtime Thanksgiving week. So maybe they’d rather not play a team that good that is now playing well enough to win its fourth state championship in five seasons. Or maybe people on the west side of the Illinois River just don’t like people on the east side.

In the end, who knows why anybody does anything? All I know is that the game we’ve been waiting for has finally arrived. Morton-Richwoods III. It’s the climax of a thrilling trilogy; it’s also a rematch of last year’s sectional championship game. People east of the river may want to forget that one. Richwoods won, 49-29, and it wasn’t nearly that close. The Knights went on to win the state championship and, this year, set their sights on winning it again.

Before she became a Potter, Katie Krupa saw that game a year ago. Most of it, anyway. She said, “I didn’t want to watch it,” meaning the part where Richwoods intimidated Morton en route to a 30-point lead.

Krupa was an eighth-grader then, a spectator waiting her turn on-court. Now she’s a freshman who scored 26 points tonight and said of that loss to Richwoods, “That won’t happen again. It’ll be fun this time.”

It will be fun only if the Potters play better than they did tonight. They were up by 27 points with a quarter and a minute to play against a team they’d beaten twice this season by 30 and 42. But as Morton coach Bob Becker went deep into his reserves, giving his starters rest, Canton began throwing everything into the air and watching it fall through the hoop. Suddenly, Morton’s lead was down to a dozen points, 64-52.

With 1:56 to play, Becker turned to his bench and said, “Starters, check in.”

By then even the starters didn’t help much. Canton got it to 64-56 with 1:04 to play. A couple more 3-pointers and there might be no Richwoods-Morton III.

“I don’t think there was ever a doubt,” Becker said, though he did admit that sending in his starters for the last two minutes was one way to make sure there was never a doubt. Canton made seven fourth-quarter field goals to Morton’s two. The Potters’ last seven points came on free throws by starters: Two by Krupa, two by Tenley Dowell, and three by Lindsey Dullard.

If Thursday night’s sectional championship game portends the eventual state champion as it did a year ago, it will be because Morton plays for 32 minutes the way it did for three minutes tonight. The Potters led 39-27 when they began a 17-2 run for a 56-29 lead that caused one Richwoods player to rise and turn to leave while saying, “This game’s over.”

The run began with a Krupa power-move layup followed by her put-back of a rebound. Dullard stole an in-bounds pass for a layup. Then Krupa scored a layup-and-one off a nifty Dullard pass. Dullard and Addi Cox scored from in close and Dowell capped the run with a steal and layup set up by Morton’s trapping press.

The :Potters were 27 points up with 2:48 to play in the third quarter, and another 40-point victory over Canton seemed inevitable. Instead, in the next nine minutes, Canton made its own run, a 27-8 move, the kind of thing that no other team had been able to do to Morton all season.

“We’ll regroup and be ready to go Thursday,” he said.

There will be no secrets that night, not between veteran teams meeting for the fifth time in two seasons.

Maddy Becker went down with a knee injury a minute into tonight’s game and sat out the rest. She is to be examined Wednesday morning.