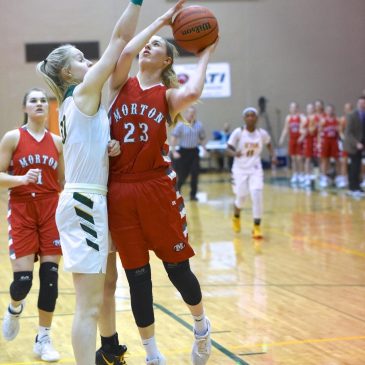 I could start with Bob Becker’s shoes. “You are changing them, right?” is what his daughter, Maddy, said. They were dark blue sneakers with white edges. They were, to be honest, a step up from the world-weary dress shoes he most often wears. Still. Sneakers? For a super-sectional game? With a state championship still at stake? “They’re comfortable,” the coach said, “and I like ‘em.” So there is that.

Or I could start with the Bishop McNamara guys in the first row of bleachers right behind the Potters’ bench. I don’t know that they’re students. I do know they wore Bishop Mac gear and were raucous in support of the Bishops – until it was clear these Bishops didn’t have a prayer. The Potters were tall and lean; the Bishops, not so much. Their heroines down by about 30, the McNamara guys began shouting to the Potters, “I’m taking you to the prom.”

“Yes, I heard them,” Bridget Wood said. So I could start with the senior about to make her third trip to Redbird Arena in four seasons. I could tell you she made my favorite play tonight. She had the ball on the right side. “I saw an opening,” she said. She ran to daylight. On the way, she took a zig-zag route though maybe three beleaguered, exhausted Bishops. Asked to describe her path to a layup, Wood laughed. She waved her hands this way. She tilted her head that way. She shrugged her shoulders. She said, in essence, “Who knows, but it was fun.”

I could start with a riff on the Potters’ chances of winning a fourth state championship in five years. Those chances are very good. I’ve seen the teams that won the state in 2015, ’16, and ’17. This team, now 31-3, may be better than those. This team can beat you any way you want to be beaten. On offense, it can score in transition and out of sets, from down low or from out high. On defense, it can suffocate you with a full-court, zone trapping press they call “mayhem,” it can go man-to-man against your best people, and it can throw in a triangle-and-two if Becker decides to confuse you into submission.

“They’re playing at a very high level now, at both ends,” the coach said. “There’s just a belief in each other, a trust, a connectedness. All 14 players are in it as one. I just love it.”

But I really should start with Lindsey Dullard because, if you didn’t see Dullard’s first quarter tonight, you missed the best quarter of any girl’s sweetest basketball dreams. It wasn’t just that she scored 16 points, 11 of them in the last three minutes of the quarter. She scored them sensationally in a big game. She went 4-for-4 on 3-pointers from all points of the basketball compass – one from the left arc, one on top, one from the deep right corner, and one from the top right. (I’m not counting one she missed from 40 feet at the buzzer.)

“Dullie was amazing,” her senior All-State running mate Tenley Dowell said. “She was taking all the shots – and she should’ve been – she was making everything.”

Dullard said, “Oh, my gosh. So excited. We came out really hard, and my teammates got me the ball. All I had to do was put it in.”

Off a 26-10 first quarter, the Potters were up at halftime, 39-19. They began a 17-0 run late in the second quarter that carried halfway through the third for a 52-19 lead. It was this lop-sided: One minute into the third quarter, when Dowell threw in a 3, the Potters had enough points, 45, to win without scoring again. And this was against a team with 24 victories, a team that by reaching the super-sectional was one of the last eight standing.

And now, for the fourth time in five seasons, the Potters have earned their way to Redbird Arena for the Final Four of the state’s Class 3A tournament. Two victories Friday and Saturday would give the Potters their fourth state championship in those five years.

Can the Potters win it all again?

“I definitely think we can,” Dullard said.

And Bridget Wood said, “I don’t want it to end.”