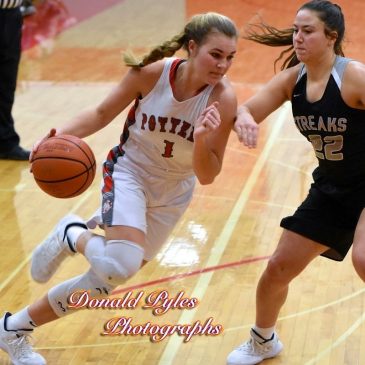 It got quiet there for a while. Everybody in town, give or take a few slackers, had come to Redbird Arena. Certainly, every high school kid, give or take a few advanced chemistry nerds, was at Redbird. Everyone came wearing red, the Red Sea of Morton. They came with posters and signs and big-head portraits of their heroines. They filled a third of the 10,000-seat arena and came to be raucous, rock ‘n rollin’ fans. They came to see the Potters win, and win again tomorrow, to win a fourth state championship in five seasons.

And then the game started. And it got quiet. Real quiet. Dead Sea quiet.

Someone left a layup short – a layup, uncontested, it bounced off the underside of the rim. Then a 3-pointer from 20 feet flew 19 feet. The Potters’ coach, Bob Becker, got up in someone’s grill over a defensive assignment. Another missed layup. A traveling call. It was so quiet that in the sixth row of the bleachers you could hear the coach shout, “Change that mind-set NOW.” Becker was running subs in and out, once sending in three together, searching for an answer to whatever was happening. ”A little tentative,” Becker would say afterwards. “A little bit frazzled.”

Nazareth Academy led after that quiet quarter, 11-4. Morton had 4 points, Morton averaging 65 a game, Morton with two baskets to begin the season’s biggest game. Not that Nazareth, even if it matched Morton’s 31-3 season record, was that good. The Potters were better in every basketball way. Still, here’s a note I made about the Potters: “As bad as they can play. Scared. Hurried. Needs life.”

Then along came Tenley Dowell.

This would become her finest moment. When her team needed her most, she was there. As good as she has been for three seasons, she now can say she was at her best when it meant the most. Without her today, Morton loses. With her – a game-high 23 points, game-high eight rebounds, 7-of-9 shooting, 7-of-8 free throws – with Tenley Dowell breathing life into every one of her teammates – no, no, forcing life into them – they won going away.

At the end of that first quarter, here’s what Dowell thought: “We have to score some points.” So, on Morton’s first possession of the second quarter, Dowell did what defines her. She attacked the rim. She’s a 6-foot senior All-Stater who moves with long strides and great body control. Through traffic, she finishes with either zhand. Given a glimpse of an opening, she’s gone. Fouled on that drive, she made a free throw. One point. Not much. But enough to suggest life. Then came some points. Two by Lindsey Dullard, two by Katie Krupa, two by Courtney Jones – and it was tied, 11-all, and the Red Sea came to life, roaring.

And with 3:54 left in the half, Dowell had the ball on the right side. She had the ball for a second, maybe less. Catch and shoot. From the right side arc, she put up a 3-point shot. “We have to score some points,” she thought, and on the season’s biggest stage – a semifinal in the state tournament at Redbird Arena – she caught it and shot it and let her wrist fall loose, a shooter’s pose, as the ball fell through the net, a shooter’s reward.

It was Dowell’s only 3-point attempt of the game. It was the climactic moment of a 10-0 run, with Dowell beginning the run and ending it. It put Morton in front, 14-11, with Dowell having scored 8 of the points. Once in front, the Potters stayed there.

“We got better and better as the game went on,” Becker said, for that’s what championship teams do, imposing their will on lesser teams as the vise of time closes. Becker’s teams are famous for turning games their way in the third quarter, and if today they used a solid second quarter to take a 23-18 halftime lead, they decided the issue in the third. Up 26-25 at 5:37, the Potters outscored Nazareth 12-2 in the next four minutes.

That run began with two Krupa power moves underneath and a free throw. Dullard scored three points on an alley-oop layup-and-one, after which she dropped off a pass to Krupa for two more. Then Dullard deflected a Nazareth pass near midcourt and got the ball to Krupa, whose missed layup was put back in by the trailing – you guessed it – Tenley Dowell.

Morton led, 38-27, and was up, 42-30, at the buzzer when Nazareth’s star, Annie Stritzel, thought she might as well throw one at the hoop from 65 feet, the heave falling 20 feet short – an act of futility symbolic of her day against the Potters’ scrambling, helping, filling-the-gaps defense. Stritzel came in off a 36-point super-sectional game. For the seasons, she averaged 25 a game. Of her 21 today, 10 came in the last four minutes when the Potters had a double-figure lead and her scoring no longer mattered.

And now, for the fourth time in five seasons, the Potters will play for the Class 3A state championship. Their opponent today will be Glenbard South, a 32-27 winner over Springfield Sacred Heart-Griffin. For those Red Sea fans wondering how good Glenbard South is, I will say only this: I watched 30 seconds before deciding that Morton could beat an all-star team out of that game. That said, I still want Tenley Dowell in the lineup today. Just in case, y’know.