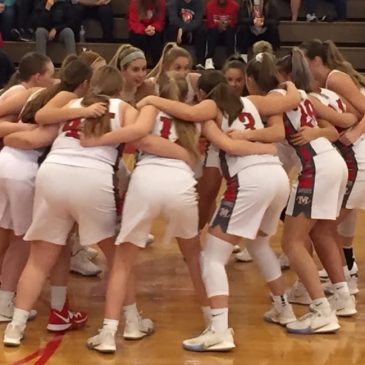 So, a half-hour before tip-off, I’m watching the East St. Louis High School Flyerettes warm up before the final game of Morton’s Thanksgiving Tournament’s first day in the Potterdome.

Hmm. Might Morton High School drop the Lady from its girls teams nickname? So dainty, so genteel, those Lady Potters, a nickname suggestive of perfumes and flowers, not so much suggestive of a dynasty that has won four state championships the last five years. Might the powers that be rename them the more muscular POTTERETTES?

No, not likely, and anyway ’tis a question for another day because the question during the East St. Louis warmups was, like, OMG, really?

All that skipping and hopping? Then all the stretching and twisting? And after all that came the that-has-to-hurt-bad part. They all threw themselves onto the floor and arranged their limbs in splayed-out positions suggesting a chiropractor would be hard-pressed to un-pretzel everybody.

I thought, “Yeah, I could get into that position and I would never walk again.”

The news is, East St. Louis survived its calisthentics. The Flyerettes not only walked again, they all but flew. Quick afoot, good with the ball in hand, relentless on the boards and defensively, the Flyerettes led Morton for the game’s first 10 minutes and came from 11 points down late in the fourth quarter to throw one last fright into the defending state champions.

It was Morton, 53-42, when Makenna Baughman scored on a full-speed-ahead fast break layup that was the result of a Raquel Frakes steal and outlet to Peyton Dearing who moved the ball to Baughman two steps from the hoop. The clock showed 3:19 to play. All seemed safe and secure for the Potters – until the Flyerettes scored six straight points – on a put-back and two fast-break layups in a 72-second burst — and trailed by only five with 1:21left.

Time for a Potter to be a hero.

Dullard was the difference all night. The all-stater was at her best when it meant the most. She scored 11 of Morton’s 28 second-half points. She was also a constant force rebounding, on defense, and in handling the ball late in the game against the aggressive, pestiferous East St. Louis defenders.

Of East St. Louis, Morton’s coach, Bob Becker, said, “They’re very athletic and fairly disciplined. They put us in situations that we’ll learn from. We got a victory, but we learned we have to do a better job fighting on the boards. We have to understand that things we can get away with practice, we can’t get away with in games against teams like East St. Louis.”

The sophomore Katie Krupa saw the game “as so much fun, just like last year’s games,” and Dullard said, “I knew that we all had to be confident in everything we did and play the way that we all know how to play. We had to be the more aggressive team. This game told us that we can battle and compete with the more athletic teams.”

A note of interest to history majors in the audience: This was a long-delayed meeting of history-making teams. In 1980 East St. Louis’s Lincoln High School won the Class AA girls state championship. For 35 years it remained the only downstate public school outside of Peoria (Richwoods, Manual) to win the AA title. Then, in 2015, Morton’s Lady Potters became ONLY SMALL-TOWN public school state champion in that class, by then rejiggered to be Class 3A.

As much of a nail-biter as its evening game was, Morton’s morning game was a relaxing hour and 15 minutes in an easy chair.

Dullard led the scoring with 15, Dearing had 12 (on four 3-pointers). Krupa had 9, Jones 7. Maddy Becker, Maggie Hobson, Paige Griffin, Frakes, and Baughman all had 3 apiece.Cailyn Cowley had 2.

The Potters wind up the tournament Saturday with an 11:45 a.m. game against Champaign Central and a 5 o’clock game,likely for the tournament championship, against Peoria Richwoods, twice an easy winner on Friday.