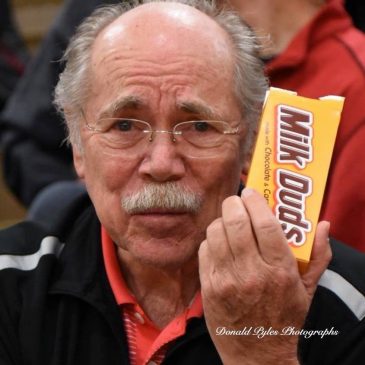 I have this friend with a wicked smart sense of humor. After years of observation, she decided to give me, as an early Christmas gift, a pair of socks emblazoned with the words, “Grumpy Old Man.” How she came to that assessment is a mystery. Across PotterWorld the consensus is that I am grumpy only when the Potters run late in delivering my Milk Duds. But then, maybe that is it. “Seven games,” she said, “and you’ve got what? One box? You ol’ grump.”

Absent the caramel chocolate darlings, I made it through this game with the help of a second friend, one not nearly so wicked but just as smart and kind enough to ship into the Potterdome a Tupperware container of buttery sugar cookies frosted with Christmas trees. Yummy.

I mean, what’s a sportswriter to do when an undefeated team,the defending state champion, now 7-0 and imagining a fifth state title in six seasons, creates a 40-point blowout and the two biggest questions of the night come in the first 16 seconds and in the last two seconds?

First question: 16 seconds in, how in the world did Pontiac get three shots from inside the paint?

Very good teams do such work. Pontiac is not a very good team. It had lost 9 of its first 11 games.

So when Morton’s coach, Bob Becker, saw the visitors get two offensive rebounds in those first 16 seconds, he rose from the bench and in the voice of a teacher who had come to the realization that his students couldn’t count as high as two decided to shout, “THAT’S TWICE!”

Meaning that on two successive shots the Lady Potters had failed in rebounding’s ultimate fundamental.

Second question: Would Morton, with two seconds to play, score one more 3-pointer, its 10th of the night, and reward the gathered faithful with tickets for FREE CUSTARD! at Culver’s restaurant?

After the 9th 3-pointer with 4:46 to play – by sophomore Maggie Hobson from the right side – Morton managed only one more 3-point attempt, that one at 3:10 on a running clock.

After that, Gabby Heer, a freshman and a capable 3-point shooter, drove for a layup and there was heard in the crowd a man saying, “We don’t want no stinkin’ layup,” and I believe the voice was that of a grumpy old man who had no Milk Duds and had run through his buttery sugar cookies frosted with Christmas trees and now was willing to go into a 19-dregree night to fetch his FREE CUSTARD!

Then, with maybe two seconds to play, here came Heer with the ball again – only this time she was at the far end of the court, 60 feet from the hoop, and the buzzer sounded before she could launch a FREE CUSTARD! prayer from mid-court.

Anyway, after that fundamentally-flawed first 16 seconds, the Potters pretty much were sensational in every way a team can be sensational. Its offense was relentless, its defense was merciless. The Potters scored from set plays and from ball movement that found the open shooter (Maddy Becker with four 3’s). It scored in the paint (Lindsey Dullard on drives, Katie Krupa at the rim, both players adept with either hand). Bewitched and bewildered by the Morton press, Pontiac considered itself triumphant if it so much as got the ball past midcourt.

And when it was over, I asked Bob Becker what the game meant.

“We can be so, so capable,” he said. I could sense a “but” coming. Sure enough “We have to understand that we can get by against some teams without doing the little things. The seniors want to win another state championship. I know I sound nit-picky, like I’m a cranky old jerk, but we can’t beat sectional-final opponents and win at Redbird without doing all the little things right. We need every single player, all 16 of them, bringing their absolute best effort to every practice and every game every single time.”

About here, I showed my Grumpy Old Man socks to the Cranky Old Jerk.