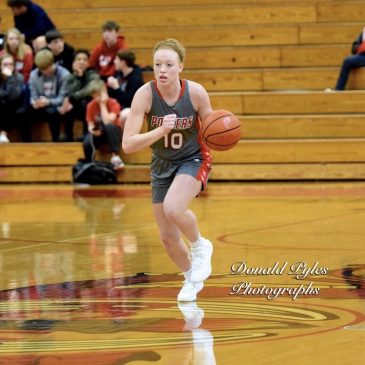 Yes, you bet, most of what happened was really good stuff.

There was also this. Raquel Frakes’s hair band broke. Her ponytail fell apart. As the second quarter was about to begin, Frakes was on the bench signaling to assistant coach Brooke Bisping that, Hey, my hair band broke and I need a new one. So Bisping went, Don’t look at me, I don’t have a hair band. And then Bisping became as resourceful a coach as she was a Lady Potter in her all-time-leading-scorer-they-retired-my-jersey day.

Bisping reached into assistant coach Megan Hasler’s hair and poked around long enough to steal her colleague’s hair band. She tossed it toward Frakes, who retrieved it and replaced her ponytail with what I am told is a “messy bun.” (The things an old sportswriter learns.)

Here the drama moved into a second act, for Hasler’s hair was now a mess of its own – until she walked a few rows up into the bleachers where a spectator happened to have a spare hair band. (I once saw Dean Smith reach under the North Carolina bench to replace a player’s shoe that had ripped. But this was my first hair-band emergency.)

Perhaps all this was coincidence. Perhaps the hair repairs had nothing at all to do with it. But a guy’s gotta write something. And I am here to report that once Raquel Frakes got her messy-bun together, the 5-foot-10 junior became a flying star of such brightness that her coach, Bob Becker, said, “There’s not a better sixth-man in the entire state than Raquel.”

Two minutes into that second quarter, Frakes made a 3-pointer from the deep left corner. And as nice as that was – an excitement in the middle of a 31-3 run – Frakes did better, more important work without the ball. When she didn’t have the ball, she went and got it. A remarkable jumper (a killer outside striker on the school’s volleyball team), Frakes became a rebounding machine. A scrawl in my notebook: “FRAKES! REBS!!” A look at coach Hasler’s statistics chart showed Frakes with four rebounds in the quarter, including one that moved Becker to say, “She was like my waist high off the floor.”

Most of the time, it seemed, a Frakes rebound led to a Peyton
Dearing 3-pointer. The 5-foot-5 guard – a left-hander, just as Frakes is a left-hander – made 4 3’s in that second quarter. She needed only 4 minutes and 28 seconds to do it. “The hot hand,” Becker said, “and we got her the ball. No reason not to.”

If that halftime score seems outrageous, it is. But readers of long memory know that a year ago, in these teams’ December game, the halftime score was 53-0 (the final 68- 18). However mediocre Pekin may be, especially with its leading scorer out with an injury, the full truth is that the Potters were simply unbeatable tonight. Their ball-handling was crisp, deft and careful, their shooting sensational (8 3’s, 10 layups/put-backs), their defense suffocating. (I don’t know how many prayerful 3’s Pekin launched. A bunch. I do know how many 3’s they made. Zero.)

This was not cruel and unusual punishment by an undefeated, defending state champion team now 8-0 overall and 2-0 in the Mid-Illini Conference (with a 49-game league winning streak.) This was a clinic staged by high-achieving athletes practicing basketball’s fundamental skills beautifully.

Courtney Jones, the senior point guard, has taken note of all that. “Our team chemistry is getting better off the court because we’re getting to know each other better,” she said, “and we’re jelling on the court, too.”