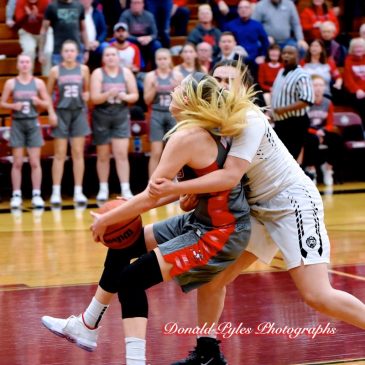 Enough of these TESTS, already….I myself am ready to relax…in the last couple weeks, the Potters have played teams with records of 8-0, 12-0, 13-2, 14-1, 14-2, and 13-2…..this is Finals Week every stinkin’ day!….it’s calculus followed by biology and astronomy (is there such a class?) before enduring Advanced Placement English Lit (“Please, Ms. Dearing, recite Shakespeare’s Sonnet XXIX”)….so the Potters are a wonderful 16-0, but still, my head’s gonna explode if they don’t have a cupcake soon!!

I peeked at the schedule.

Then, in the Potterdome, East Peoria.

I feel so much better now.

Much, much better than I felt going into tonight’s fourth quarter with Peoria High leading, 39-34, and seeming to have mastered the sort of game plan that always gives the Potters fits. It’s built on speed at both ends. Offensively, it’s devil-to-the-hindmost, rapid-fire movement interrupted only by unexpected 3-point tries. It’s relentless attack on defense, hands everywhere, bodies bumping ball-handlers, daring any and all to make a lazy pass or let her hands go soft on the ball. Afterwards, talking to Potters’ point guard Courtney Jones, I characterized the Peoria defense as “clawing and scratching,” causing Jones to touch the tip of her nose and say, “I have a scratch right here.”

Going into that fourth quarter, Peoria had come from behind six times to take the lead against the defending state champion Potters – no small feat, considering that the Potters had trailed in the fourth quarter only twice all season. It’s not that Morton had played poorly; let’s call it mediocre by its high standards. More important, let’s say Peoria was “motivated, determined, and hungry,” to quote the Morton coach, Bob Becker, and, to quote Peoria’s Meechie Edwards, “We came ready to go.”

What we saw, then, was a fabulous girls high school basketball game — “These games are FUN!” the Potters’ Katie Krupa said — as much fun as they get for a player, not so much for the old folks holding their breath for an hour and 15 minutes.

Both teams had big runs early in the second half. Morton opened with a 9-0 run to take a 30-25 lead midway in the third quarter.

By then, it seemed clear the only question was: Who’s going to make the last big run?

A suggestion of the answer came quickly. It came in the first 28 seconds of the fourth when Morton’s Peyton Dearing made a 3-pointer from the top of the arc.

A second suggestion came 31 seconds later. It came at Morton’s defensive end. A Peoria ball-handler, befuddled, chose to walk with the ball.

And less than a minute later, here came Dearing again, now with the ball on a string, another of her left-handed drives that gets past idling defenders and to the rim in a flash, this time for a layup that tied it at 39.

Finally, giving up on out-of-control drives, they threw up a prayerful 3-pointer that went in. They led, 42-39, with 4:27 to play – after which it was all Morton. Becker would say, “Our kids have got that champion’s DNA,” and they proved it when it mattered most.

We saw it first in Dearing. Against Peoria’s pestiferous defenders who all seemed to have four hands slapping at the ball, Dearing worked with the ball on the dribble forever – or 15 seconds, whichever came first – before noticing daylight down the left side of the lane. There she did her DNA thing.

“I saw I could go,” she said. “And when nobody came from the help side, I just kept going.”

Suddenly running free, Dearing dropped in a layup to bring Morton within a point, 42-41, with 3:10 to play.

That caused Peoria to call timeout. Edwards had long since suspected the roof falling in. “We know who Morton is,” he would say later.

During that timeout, on the Morton bench, Becker looked at Dearing and said, “You’re not going to let her catch it.” He meant Dearing was to make life miserable for the Peoria girl who had made that 3 a minute earlier. Spoiler alert: that girl touched the ball once after that. With Dearing “in her shorts,” as the coaches say so inelegantly and so wonderfully, that girl on that one touch was called for traveling.

Meanwhile, here’s what Morton did from 42-41 down with three minutes to play. It gave the ball to Maddy Becker a step outside the 3-point arc on the right side. For anyone seeing Morton for the first time this season, giving the ball to Becker there might have seemed a misguided idea. She was, at that point, 0-for-5 on 3’s.

But who else do you want shooting a 3 in the last 3 minutes if not a shooter who’s shooting 50 percent on 3’s for the year?

“Keep shooting,” the coach Becker would say, and the shooter Becker kept shooting.

Morton’s last four points came on another Dearing layup (with her 16 second-half points, she gets an A+ on this test, never mind if she even heard of Sonnet XXIX) followed by two Lindsey Dullard free throws when fouled on a breakaway layup with a steal in the last 25 seconds.