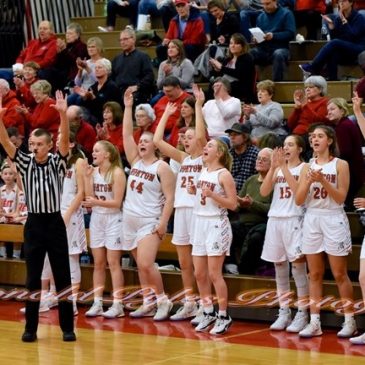 Courtney Jones moved the basketball smoothly, bouncing it from her right hand to the left, and then between her legs to her right hand again and reversed it to her left and returned it to the front – all this done in less time than it took to type the words.

Her audience loved it.

They loved it because now she let each of them try to do it.

These were the girls of the sixth-grade team from the Morton Heat youth program. This was during the Morton High School’s junior varsity game at the Potterdome tonight. When I say “during” the jayvee game, I mean DURING the game. The girls gathered alongside the bleachers at the stage end of the court, the game going on behind them, the sixth-graders oblivious to anything but the wonder of getting a private ball-handling drill with . . .

Let’s say it this way. Courtney Jones is now a senior in high school, a starter on perhaps the best girls high school team in Illinois, and she still remembers her sixth-grade moments with . . .

“A LADY P0TTER!,” she said. “It was always so cool. I love hanging out with the young ones now. I saw one of them crying, so I wanted to do something with them. Four were sitting down, off by themselves kinda, but pretty soon they were all into it.”

I loved this night. The Potters did basketball the way basketball should be done. “Our kids were comfortable, focused, and dialed-in at both ends,” their coach, Bob Becker, said. After six Christmas holiday games on the road, he said “it was good to be back in the Potterdome.”

Good heavens, it was 33-0 early in the second quarter. All five Morton starters had scored, on 3-pointers, on steals, on fast breaks, all done with textbook precision, every bucket coming off an assist as clever as it was necessary. Thinking here of that moment Maddy Becker, of all the short people, found herself with a rebound on the low right block and, acutely aware she was covered up by big people, knew better than to go back up with it, and so she somehow lobbed a pass over those big people to her own big, Lindsey Dullard, on the low left block for a layup.

I loved all the smiling tonight, such as with 1.1 seconds to play in the first half.

Courtney Jones waiting near the jump circle to take the in-bounds pass.

Her eyes say all that. I hear it.

Becker sees that East Peoria is nowhere near Jones. He nods toward the Potters end. Jones hears the coach say, “Of course!”

So she lets the in-bounds pass bounce once, moving her a foot or two past the midcourt line, where she puts up the 40-footer which is in the air as the buzzer sounds and it looks good . . .

“I would not have been surprised if she made it,” Becker said, because she has done it in a real game (the Fremb miracle a year ago!) and has done it in practice to earn a second chance in the team’s shooting contests.

Only it’s a little too much of a line drive, it hits the board too hard, and while it rattles the rim, it bounces away – and you’d never know it judging by the incandescent smile on Jones’s face, one more proof of the fun these Lady Potters are having right now.

Have I mentioned Peyton Dearing’s voice?

Courtney Jones did when I asked what was so funny that the team broke its huddle entering the second half with laughter that caused Bob Becker to join in?

“Peyton has this voice that she does,” Jones explained. “She was doing it and trying to get Coach to do it.”

Investigative reporter that I am, I investigated.

“A bunch of us were at my house before the game,” she said, “and we got to doing this voice. Not really a voice that said words. More a sound, y’know? Abby (Steider) started it. Coach kinda looked at us. He didn’t do it.” After Dearing’s reluctant voicing of the voice, how I’d describe the voice is, it’s Homer Simpson gargling.

After which, she looked over at her buddies on the bench and smiled at the way bad things sometimes happen.

Yes, a smiling night. The Potters are now on a 28-game winning streak counting last season. They’ve won 52 straight Mid-Illini Conference games. Over the last 5 ½ seasons, they’re 182-13 with four state championships. A fifth is the goal this season. And why not – on a smiling night, I ask why not — why not just do the thing? Why not go 36-0? Why not go undefeated?