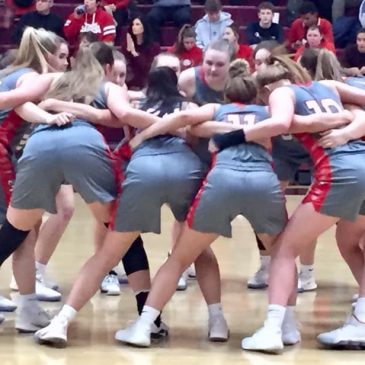 My sportswriting hero, Red Smith, once said, “God is good, God will provide.” Red meant God would provide the stuff for a daily column. He would help the poor, poor columnist find a way to fill the allotted space. I thought of Red tonight. I needed help.

The game was over, the Potters having crumbled another cupcake in a game we will mention later, and here came Fred Remmert with a story, Fred being the father of Olivia Remmert, who is a senior guard, a veteran of two state championship teams, and, on this night, a courier chosen by the Potters to deliver a box of Milk Duds to your faithful scribbler..

“I told John Bumgarner this story,” Fred said, and now he told it to me, a story out of his Morton High School days, and I’m listening because I had spent an hour and 15 minutes at a game in which nothing much happened except one team was really really really good and the other one made the mistake of showing up.

Which gives me a chance – filling up space here – to say I, too, have a history with John Bumgarner.

John is the father of one of the Lady Potters’ all-time greats, Cindy Bumgarner, the guest of honor at a Potterdome game last Saturday. For most of the last 30 years, John and his wife, Karin, have been constant presences in the Potterdome, usually sitting at midcourt across from the benches.

So in my Milk Duds era I came to know John at games.

Then one day, four years ago, I got a letter from Deer Creek-Mackinaw’s football coach with a note on an old newspaper clipping: “Thought you’d be interested in this.”

Let’s say it was a clipping from 1960. It was a pre-season high school football story in the Bloomington Daily Pantagraph. I had written it. It was accompanied by a picture I had taken of the Dee-Mac stars, one a quarterback identified as Denny Bumgarner.

I knew John was from Mackinaw. Next time I saw him, I asked if in his day he knew the star quarterback Denny Bumgarner.

So, a lifetime ago, trying to be a sportswriter while working my way through Illinois Wesleyan University, I took a picture of the guy who rode shotgun with me tonight to Dunlap, where nothing much happened except the unbeaten Potters (7-0 in the Mid-Illini) won their 20th straight game of the season and 499th of Bob Becker’s coaching career with the coach’s daughter, Maddy, outscoring Dunlap by herself with six 3’s, at least one in each quarter.

“They were doubling me,” said Katie Krupa, the Potters’ post, “and that left Maddy open, and she was knockin’ ‘em down.”

“Wide open,” Maddy Becker said, “and my teammates were getting me the ball.” She also had an opinion on the Potters’ defense this night: “Solid.” Well, if solid means impenetrable, yes, the Potters’ defense was solid. Dunlap made one field goal in the first half, that with 20 seconds to play, and trailed at halftime, 18-4. Words fail to describe the futility of Dunlap’s shooters, who may have been frightened by Morton’s fearsome reputation and certainly threw up a lot of frightful shots, including air-ball layups and 3’s that came to earth in distant zip codes.

“Our on-the-ball defense was great,” Bob Becker said. “We played great defense ‘within a yard,’ three feet either side of you.”

The Potters did all this without their leading scorer, Lindsey Dullard, and sixth-man Raquel Frakes. Dullard’s return from a concusion is uncertain; Frakes will play Jan. 25.

“When we get them back,” Becker said, “we can be scary, scary good.”

Rather scary tonight. Against a team that was 12-4 and 5-1 in the conference, they led at the quarter 10-1 and 34-11 after three to create a running-clock fourth quarter.

Wait. As it happens, I have space to fill and here came a man with a white beard. He wore a blue knit seaman’s cap. He said, “I’m Mike Dearing”

I saw a resemblance to Peyton Dearing’s father. So I said, “Are you Robin’s brother?”