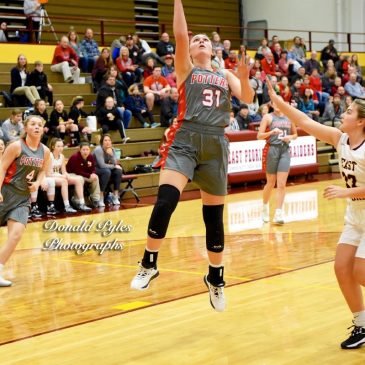 Not much of a game because, for reasons unknown, Morton always has the better athletes better prepared to play high-level basketball. With seven Potters scoring, it was 28-3 after a quarter. Against Morton’s unrelenting full-court trapping defense, East Peoria made 15 trips down-court before getting off a shot. Now the Potters are 24-0, East Peoria 3-18. But I digress.

Let’s get back to the national anthem.

With players, coaches, and officials lined up, the public address announcer asked everyone in the East Peoria High School gymnasium to stand, face the flag, and honor America during the playing of the national anthem.

We waited for the music.

We waited some more.

Then someone whose voice sounded like mine said, “We’re ready.”

We all started singing.

The Star Spangled Banner, done a cappella by a couiple hundred people in from a snowstorm.

Not that we raised the roof with our mighty voices. Not that anyone was on key. It wasn’t even that we all remembered the words exactly, though we did start well: “Oh, say can you see by the dawn’s early light . . . ”

The p.a. man said, “Good job, fans,” and we gave ourselves a round of applause, and finally we sat down to watch the undefeated, No. 1-ranked, defending state champion Lady Potters win their 34th straight game over two seasons and their 55th straight in the Mid-Illini Conference (8-0 this season and likely en route to their sixth straight M-I title, the last four with 14-0 records).

It didn’t take long to notice a trend in this one.

Morton’s scoring in that run: a Courtney Jones rebound, a Maggie Hobson 3 (in the sophomore’s first varsity start), a Katie Krupa fast-break layup, another Krupa layup, a Peyton Dearing 3 (the East Peoria transfer!), a Jones 3, an Olivia Remmert layup, and a Krupa rebound-and-one.

Soon enough, it was 43-6 and I had made one note worth repeating here.

(It started with an air-ball 3 caught and thrown back wildly over the hoop where, three times, battling East Peorians snared rebounds and flung the rock high and in the direction of the basket, injuring only the airspace above the iron.)

It was 62-22 after three quarters when I thought to do the first in-game interview in my hundred years doing this work. Three of the Potters’ stars – Lindsey Dullard, Maddy Becker, Raquel Frakes – had chosen to sit together on the team bench, though none would play, all injured.

When Dullard came to the bench after the third-quarter break, I asked, “How’s the headache?” An all-stater and the team’s leading scorer, Dullard has missed four games with a concussion. She had been told she would be re-evaluated once her symptoms were gone, the primary symptom being headaches.

Earlier, I had asked Maddy Becker about her right knee, injured two days before.

With crutches beside her, Becker sat on the second row of bleachers during the jayvee game. She had an ice pack on her knee – she suffered an ACL tear in the left knee last February – and did not yet know the extent of this new injury.

Her coach and father, Bob Becker, said 1) x-rays had revealed no bone damage, 2) an orthopedist’s hands-on examination was inconclusive, and 3) results of an MRI test are due to be delivered Friday morning. “It still could be an ACL or miniscus,” Becker said.

There’s another possibility, too, Maddy Becker said: “It could be a bone bruise.”

While preferable to ligament damage necessitating surgery, a deep bone bruise might sideline Becker for a month, by which time the Potters would be starting state tournament play.

“We’ll know more in the morning,” Bob Becker said tonight, “when the doctor reads the MRI.”

As for Frakes, whose broken left wrist has kept her out for two weeks, she will return Saturday night when the Potters play at home against Rock Island.

On the way into the night’s snowstorm, I first passed by Lindsey Dullard, who elaborated on her condition. Turns out, as we say in the news business, she had buried the lead during our in-game conversation.

“I’ve been cleared to practice tomorrow,” she said. “No contact, but okay’d on running and shooting. If all goes well, I’ll play next Tuesday.”

That’s a game in the Potterdome against Washington.