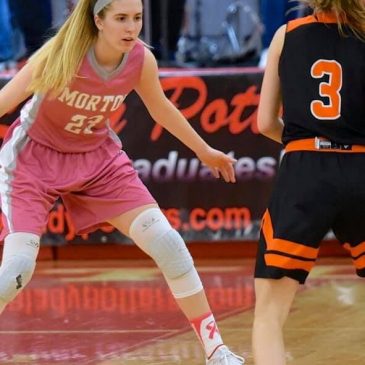 Before the game began, the Potters were behind, 1-0, and it was 1-0 only because the Washington free throw shooter missed her first one. On Pink Night, the Potters had been charged with a technical foul. T’s are usually dished out to coaches for bad behavior featuring four-letter words. It was, in fact, a four-letter word that got the Potters in trouble.

The word was pink.

“Do you have the letter saying you can wear pink?” a referee had asked the Morton coach, Bob Becker, during the pre-game meeting of captains and referees.

Becker said, “Huh?” The coach’s reply may have lacked eloquence. But it was filled with perspective and a quiet, burning indignation. In Becker’s 21 seasons as the Potters’ coach, his teams have always come to Pink Night wearing pink uniforms. And never did a referee T’up the Potters.

“How long’s that been a rule?” Becker asked, no answer forthcoming other than, well, it’s a rule.

At some indeterminate time – Becker plans to find out when – the Illinois High School Association bureaucrats did what bureaucrats often do. One day they had no real work. So they created a rule that if you wanted to wear a pink uniform, you had to get IHSA permission.

I suppose there’s good reason for that. Maybe a road team wearing red confuses a color-blind zebra. But, really. Let’s be grown-ups here. Pink Night is a celebration of the courage we need to face cancer. On Pink Night in the Potterdome, Becker’s players climb into the bleachers to deliver pink roses to survivors of cancer. What a beautiful thing on this night to see a Potter in her pink uniform, the junior Raquel Frakes, go running – running with a rose in her hand! – to the top of the bleachers to make a man smile. You want to know what beauty is? Every year we see it on Pink Night. Beauty is that video of Mary Schultz. Once the Team Mom, mother of two Potters, we see her again and we hear her singing the national anthem in the last year of her life.

And we’re worried that the Potters wore pink?

Hell, it oughta be a law that every home team wears pink on Pink Night.

Washington’s 1-0 lead lasted all of one minute and 14 seconds. It lasted until Katie Krupa’s two free throws. About four minutes later, Morton led, 12-1. At halftime, it was 25-9. Once again, the obvious was unavoidable: Morton is just too good for everyone in the Mid-Illini Conference. Washington came in with an 18-4 record, 7-2 in the league. Those are nice numbers except that Morton came in 25-0 and 8-0 (with a 55-game winning M-I streak).

The game became interesting for about four minutes in the third quarter. Washington suddenly broke free for layup after layup, some on set plays but more than one when it out-ran Potters for fast-break layups.

Nothing bothers a basketball coach more than opponents going coast-to-coast for uncontested layups. The Potters still had a comfortable lead at 36-21 midway in the third period. (Thanks mostly to Peyton Dearing’s three 3-pointers in three straight possessions.) But Washington, after scoring only the 9 first-half points, had scored 12 in four minutes of the third.

So Bob Becker called a timeout. During the timeout, the coach’s body language was such that I made a note: “3:53, M time, BB HOT.”

“I told them they were blowing assignments,” he said later. “We needed to refocus and regroup.”

Dearing recalled the coach as mild-mannered and cool. “He told us we knew what to do, we’d figure it out,” the senior guard said.

That, they also did.

After the timeout, Morton outscored Washington, 11-6, with Lindsey Dullard scoring the last nine of those points. At 47-27, the Potters coasted into the last quarter. One 17-3 run left Washington gasping for breath, literally worn out, trailing 55-30 and reduced to throwing up prayers, most of them unanswered.

Ah, speaking of Lindsey Dullard – the team’s leading scorer returned to action after missing five games with a concussion. She played as boldly as ever, slashing to the basket and unrelenting on defense. Eleven of her 15 points came in the third quarter.

“I feel really good,” Dullard said afterwards. “I felt good at practice yesterday, the first time I’d been allowed contact, and I felt good tonight.” As for the Potters defense — sensational, save for those few third-quarter minutes — Dullard said, “We were really talking and flying around,”

Dullard and Dearing both had 15 points. Krupa had 13, Courtney Jones 8. Frakes, in her second game back after a month out with a broken wrist, had 7 points, the left-hander’s last two coming on a curling finish in the paint with her right hand. Olivia Remmert, Makenna Baughman, and Abby Steider had 2 points each.