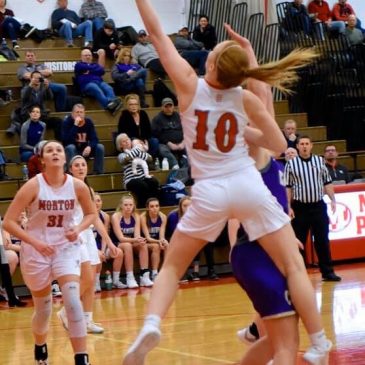 “You’ve got 9 seconds,” the coach, Bob Becker, shouted from his spot in front of the Morton bench.

Canton was shooting a free throw with :09.6 showing on the clock.

This was about to become really fun.

The girl made the free throw.

“And we ran ‘flash,’” the Potters’ Raquel Frakes said later.

What happens in “Flash” is that after the free throw the Potters make the in-bounds pass to Frakes.

Coast to coast, end to end, from under one hoop to under the other one, and the only question is:

Who needs a stinkin’ 9 seconds?

Not Frakes. Once a state champion hurdler. Not Frakes. Who hits top speed in a step and a half. Not Frakes. Who on the dribble went past stuck-to-the-floor Canton players who, if they saw anything at all, saw nothing more than a glimpse of Frakes’s ginger ponytail in full flight.

“That,” Becker said later, “was a confident, aggressive attack of the basket.”

When Frakes’s layup dropped through, the clock showed :04.9.

Do the math: 4.7 seconds to fly from New York to California.

But these are not normal times for the Potters. They are now 28-0. They are 11-0 in the Mid-Illini Conference. Their goal is a fifth state championship in six seasons. If they do that, they’re likely to finish with a 38-0 record. To do that, they need Frakes to be what Becker told us she was early this season: “The best sixth man in the entire state.”

Coming off the bench, Frakes changes games. She brings size (5-foot-10) along with that speed and outstanding jumping ability. She can score inside and from the 3-point line. As the leaping centerpiece of the Potters’ “mayhem” press, she intimidates ball-handlers into high, cross-court passes they should never try against defenders knowing that Frakes will cause those terrible passes.

So the Potters are a better team with Frakes than they were without her in the last month as she recovered from a broken left wrist.

In five games back, tonight’s was Frakes’s best. Off the bench midway in the first quarter, she quickly became an integral part of the Potters’ defensive domination. By my count, the Potters made 14 steals and/or deflections in the quarter. Frakes had three deflections; she also had a steal for a breakaway layup that made it 19-0.

“I felt back to normal, finally,” she said, meaning back to where she was before the injury. “Even when I first got back into practice, the wrist hurt bad.” What she liked most tonight, she said, was her work at the rim. While she had had no trouble getting shots in the paint, she hurried more of them than she had liked. Tonight Frakes was both quick inside and soft with her hands, giving layups a chance to find their ways off the glass and into the net – or, as she put it, “I knew I had to finish. Now I’m getting there.”

Frakes led Morton’s scoring with 13. Katie Krupa and Lindsey Dullard had 11 (9 in the first quarter). Jones and Sedona McCartney had 7 each. Peyton Dearing had 6, Maggie Hobson 5, and Gabby Heer, Abby Steider, and Cailyn Cowley each had 2.

Update on the Brooke Bisping engagement . . . .

Tommy Rush and the Potters assistant coach have set a date for the wedding – July 4.

I had a question. My very first paying job as a newspaperman caused me to fill in for vacationing staffers at the Lincoln Daily Courier. My first professional words appeared on the society page. I wrote up weddings. So, when Tommy told me tonight that Brooke had already bought her wedding gown, I immediately asked him to describe it.

“And it’s beautiful,” she said.