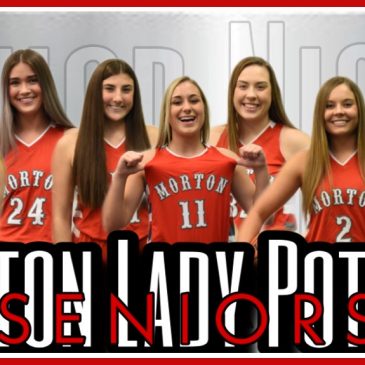 Courtney Jones first scored in an official basketball game when she was a third-grader, 10 years old. It happened in Tremont one summer day. What she did in celebration was memorable. She ran off the court. She ran into the bleachers. There she found her grandmother, Becky, who had been late arriving. There she said, “Grandma, Grandma, I made two baskets.” After which she ran back onto the court to play some more.

On this Valentine’s Day night, let me say Courtney Jones loves basketball the way we all should be in love with something and somebody. With about two minutes left in tonight’s game – the last game Jones will ever play in the Potterdome, a Senior Night game that was as pure Americana as the heartland can get – the rip-roarin’est pep band in the land, cheerleaders dancing up a storm, the old gym shimmering in Potter-red decorations from floor to ceiling – on this grand night, Courtney Jones had one more chance to make one more basket.

She’d made none. A point guard extraordinaire, Jones had given the ball to everyone else, once threading the needle from 40 feet to a flying Peyton Dearing … Dearing another senior . . . Dearing taking the ball in full stride, needing only a step and a half to complete as pretty a fast-break as you’ll ever see girls make . . . and no surprise at that athletic grace if you ask her mother, Ericka, who tells you her daughter was a champion gymnast at age 5. “We knew it early,” the mother said, “because she was always doing somersaults in her diapers.”

But Jones. She hadn’t scored.

In the first minute of the fourth quarter – only seven minutes to the end – Jones might have put up a 3 from the low right corner. Instead, she worked her way along the baseline until she saw what she was looking for, Lindsey Dullard in the opposite corner. They’ve played together since the third grade. Dullard, who “just loved basketball,” her mother, Janet, said tonight . . . Dullard, who learned to shoot in the driveway with her brothers . . . at age 10 she would ride her bicycle around the neighborhood only to stop and shoot hoops with the bike helmet on, then ride and shoot some more . . . Dullard, who scored 25 tonight, who made four 3’s, the last off the Jones pass, a play that caused her coach, Bob Becker, to shout from the bench, “PERFECT!”

But Jones. Not a single bucket to report to grandma.

Becker called timeout with 2:12 to play.

He wanted to get his seniors out of the game, one at a time, so the 1,000 fans in the Potterdome could celebrate them one last time. They would be undefeated in the regular season’s 31 games. They would win the Mid-Illini Conference a sixth straight time, going unbeaten for the fourth straight time, stretching a M-I winning streak to 61 games. In the last five seasons and this one, they are now 195-13. They begin regional play next Tuesday with a chance to win their fifth state championship in six years.

Out came Dullard to a standing ovation. Out came Dearing. Out came Olivia Remmert.

Becker wanted her to score at least once.

“You need to do it,” the coach told her.

Now a minute to play.

“Is it OK,” Jones said, this girl who knows how to play and smiles doing it, “if I go between my legs for a step-back three?”

“However you need to do it,” Becker said.

Instead, she worked her way through the Dunlap defenders for a layup.

And then, with 21 seconds to play, Jones came off the Potterdome floor one last time, not into her grandma’s arms but into her coach’s as the grandmother rose smiling behind the Potters’ bench.

The game had never been in doubt. Morton ran off to a 14-0 lead with Dullard scoring the game’s first eight points. The third- or fourth-best team in the Mid-Illini with 17 victories this season, Dunlap made a short-lived run at competing with the Potters. It moved within six at 21-15 midway in the second quarter only to see Morton go on a 19-6 run that settled the issue – the last nine points coming in a two-minute burst that began with a Dearing 3 and included a Dullard slashing drive to the rim, a Katie Krupa power move inside, and two Dullard free throws.

Becker begins every Senior Night — this is his 21st season — by eliciting from the seniors what he calls “Words of Wisdom.” Tonight he quoted . . .

Jones: “All the 6 a.m. summer open gyms, the extra training, the two-a-day practices, and even getting yelled at by
Coach was all worth it. I’d do it all over again!”

Dullard: “”If you give everything you have to whatever you love, success will follow.”

Abby Steider, who played as a senior after sitting out three years:: “If you have thoughts of quitting a sport you have played your whole life, DON’T.”

Makenna Baughman quoted Kobe Bryant: “If you do not believe in yourself, no one will do it for you.”

Maddy Becker, whose season ended a month ago with an ACL injury: “Play every game like it’s your last.”

At game’s end, Becker gathered his 16 players at midcourt, including two stars out with njuries — Maddy Becker and Raquel Frakes (ACL surgery is set for March 12).

“I told them they were the epitome of consistent excellence,” Becker said. “And I said there were still good things to come in the post-season.”

The coach also said another thing that caused Remmert some concern.

Remmert, a veteran of four years work under Becker’s direction, said, “Coach said, ‘No practice, no lifting tomorrow or Sunday.’ So I put my hand on his forehead and asked, ‘Coach, are you OK?’”