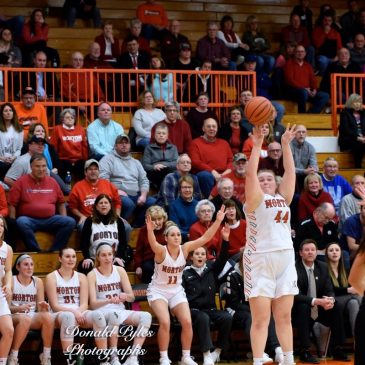 After a quarter, it was 25-2. At the half, 42-5. After three, 65-7.  Morton played 14 girls evenly, with the Morton starters playing less than half of the game’s 32 minutes.  Seventy-eleven was actually an act of tender mercy. Morton’s really good while East Peoria’s really not at the same level. The cumulative score of their three meetings this season is 203-57.

That’s good offense. It’s better defense. The Potters are relentless at both ends of the court, never taking a second off. But their perpetual movement is more evident on defense where some teams have trouble completing the simplest of passes. By intercepting passes, by picking ball-handler’s pockets, by closing passing lanes, Morton takes the air out of every opponent’s offense. In tonight’s first half, East Peoria gave up the ball without a shot 23 times. It did it every way it could be done: balls thrown into the bleachers, traveling, double-dribble, over and back, 10 seconds, an illegal screen. And that doesn’t count air balls (five).

All of that is the work of defense that gives ball-handlers the screaming- meemies. Or, to quote the more diplomatic Morton coach, Bob Becker, “We made them uncomfortable.”

They did it with Becker’s encouragement, as noted with a minute to play when he shouted from the bench at a third-stringer who, with the score 65-7, might have intercepted a cross-court pass had she recognized it a heartbeat earlier.

“We’re striving for perfection,” the coach said later, smiling at the things coaches say when they’re well pleased. Then, with a bigger smile, “That’s not too much to ask, is it?”

The Potters are now 32-0 and on a 42-game winning streak. The victory moved them to the regional championship game Friday night against the hosts, Washington High, an easy winner tonight over LaSalle-Peru. Six more victories in the regional, sectional, super-sectional and finals at Redbird Arena would give Morton its fifth Class 3A state championship in six seasons.

That possibility is produced by moments such as this from tonight’s game:

An East Peoria girl thought to put up a 3-point shot from the left side.  Lindsey Dullard had other plans.  What did Lindsey do?

“I closed out hard,” she said.

Meaning that as the 5-foot-7 East Peorian went up for the shot early in the second quarter, the 6-foot-1 Potter came at her in a hurry.

With both hands Dullard smothered the basketball before it got airborne, a sensational defensive play 20 feet out on the court.

“And somehow the ball fumbled back into her hands,” Dullard said.

“In the locker room before the game,” Jones said, “I said, ‘My girl’s getting zero tonight.’”

I checked the scorebook afterwards.

“Not against me,” Jones said brightly.

From the first practice of the season on, Jones said the Potters have been concentrating on defense. “To win the state championship again,” she said, “we knew we’d have to be good on defense, too. We have so many scorers that we weren’t worried about that. And now our defense has been progressing all season. We’re doing a really good job man-to-man and helping each other.”

For the first time this season, the Potters had five players score in double figures: Katie Krupa led with 12, Jones, Dullard and Maggie Hobson 11 each, and Peyton Dearing 10. Cailyn Cowley had 7, Olivia Remmert 6 & Abby Steider 2.