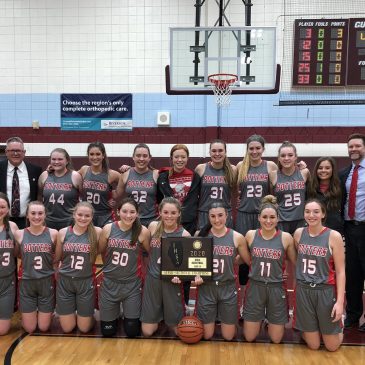 Nobody loves to play defense. Everyone wants to shoot. Kids don’t go out in the driveway and practice step-slides. The guy writing these reports ends every one with who scored how many points. Maybe later, like next week, he’ll throw in a stat about something exotic, like deflections. But, really. The basketball stars are the folks who can throw the big ball through the little hoop.

Except with the Lady Potters, whose defense is so extraordinary that when I asked the losing coach, Eileen Copenhaver, what she thought of the Morton defenders, she started to speak, fell silent, at a loss for words, stammering, until finally she said, “Just extraordinary.”

Let’s try a longer sentence. Let’s say Morton’s defenders are extraordinary for their quickness, savvy, energy, enthusiasm, stamina, and commitment to relentless pressure on the ball.

Also, they’re on fire. They have a defense called “2 Fire.” It has Morton’s two smallest people, 5-foot-4 Peyton Dearing and 5-6 Olivia Remmert, doing what they do. They make people crazy.

I’ll tell you how they do that, and I’ll tell you what weirdness goes on when they do it, but first let’s talk about the number 12.

Providence Catholic scored 12 points tonight. Providence Catholic is one of the last eight of 175 teams alive in the Class 3A state tournament. It had won 28 games. Yet its scoring tonight by quarter went 7, 1, 2, 2. This in a super-sectional. This one step from Redbird Arena. This a running-clock game.

In some instances, this would seem the unlikeliest of running-clock games. Not so much tonight. Six other times this season, the Potters have allowed no more than 19 points. Twelve times they have held opponents under 30. So, while giving up 12 points is an extreme example of Morton’s defensive skills, it is not beyond expectation or explanation.

First, Morton is now 36-0. It is the defending 3A state champion. It has been ranked No. 1 all season. The expectation was, Morton buries Providence Catholic. The explanation is more difficult to put into two or three sentences, but assistant coach Bill Davis tonight did a nice job of putting it into one memorable sentence.

“If you ain’t guarding somebody,” he said, “you ain’t playing.”

They’re flat guarding everybody in town. By recording their 200th victory over the last six seasons, the Potters moved on to the state semifinals Friday at Redbird Arena. There they will play Springfield Lanphier. A victory puts them in the championship game Saturday afternoon with a chance to win their fifth title in six seasons..

Back for a moment to Dearing and Remmert, the little people who put the fire in “2 Fire” by running at whatever poor Providence Catholic girl happened to be stuck with the ball near mid-court. Once free to move, the girl suddenly is surrounded by dozens of people, or just Remmert and Dearing running, jumping and leaping in their disguises as a dozen defenders, closing off avenues of escape, denying passing lanes, daring the ball-handler to pick up the dribble, an act that allows Remmert and Dearing to close down on her neck, leave her breathless, and, yes, make her crazy enough to bounce the rock into the third row of the bleachers (it happened) or just start dribbling again (it happened) or lose the ball on a 5-second call (yes) or a 10-second call (that, too).

Best, those two little Potters looked like they were on trampolines, bouncing around so much that Providence Catholic ball-handlers were forced to throw high lobs to complete even the simplest of passes.

“If I can’t score,” Remmert said, “at least I can get some deflections.” Then, smiling at Dearing, she said, “And for a few seconds, we do so much jumping, we get to feel tall.”

Now, let’s pretend Providence Catholic had a chance in the second half. The halftime score was 23-8. A good team could come back. But Morton had shot poorly in the first half. It had made 2-of-15 three-point attempts. Up by 15 and playing poorly on offense, the Potters were a cinch to blow the game open in the third quarter. And they did.

Those 3-pointers they missed early? Not missing them later.

At 4:51 of the third quarter, Courtney Jones made a 3 from the right side, high.

At 3:37, Dearing a dagger from the deep right corner.

In 74 seconds, that’s nine points against a team that in 1,920 seconds scored 12. In those 74 seconds, three field goals; the losers made five all night.

It was in that game-turning 17-0 run that Providence Catholic threw a ball into the bleachers, double-dribbled, and had those two time violations. It was the kind of nervous-breakdown performance that happens when an extraordinary defensive team is at its best, as the Potters were tonight.

One more thing. Remmert was involved in an odd situation late in the first quarter. The score was 10-3, Morton. She dove for a loose ball near the Providence Catholic bench. Players there started taunting Remmert, clapping in her face. A referee warned Providence Catholic that if that happened again, it would be charged with a technical. After the game, an official from Kankakee High School, hosts for the tournament, came to Remmert and said, “You did a good job there, keeping your poise.”

As for deflections, Remmert a bunch.