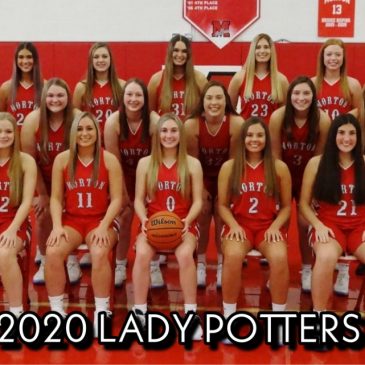 Right now they’re crying. It is 2:58 on a Saturday afternoon and their hearts are broken. They have lost the state championship. They lost on a bucket with three seconds to go.

Olivia Remmert has draped a towel over her head. She might wish to disappear. Under the towel, she is crying. Stand near her, you hear her trying to get a breath between sobs.

With both hands, Katie Krupa tugs the top of her jersey to her eyes. She dabs at her eyes with the jersey. She covers her face with it. She moves toward a line of Potters, all of them crying. She stops to embrace Lindsey Dullard, friends and teammates sharing sorrow.

They’re crying because sports does that. It breaks your heart. Sometimes, not often but often enough it happens to most everybody, the other team goes ahead by a point with three seconds to play.

Peyton Dearing’s eyes are lost in tears. Her face is red, and it is pale, and the splotches are the colors of sadness and exhaustion . She is bent double on the team’s bench. She would straighten up if she could. But exhaustion has bent her double and she can’t raise her head.

Where is Courtney Jones? The ball came to her in those last three seconds. From the far end of the Redbird Arena court, Krupa threw a pass to Jones, who did what the play called “Duke” asked of her. Drive it downcourt. See what the defenders do. If there’s a shot for you, take it.

And now Courtney Jones is crying and all we see is the top of her head because she is leaning into her coach’s shoulder and Bob Becker has his arms around her and later he says, “My heart aches for her.” She did what he asked her to do. Take the shot to win it. Three seconds to do it, the clock ticking, two seconds, one, and Jones gets to the free throw circle. She puts up a shot on the run, a floating shot, call it a “runner,” “a floater.” It’s sometimes called a “tear drop.” The ball is in the air and Jones’s pretty runner floater tear drop might win the game. There would be hoorays through the night.

At 9 in the morning, they were teenagers laughing. They had come to the Potterdome for a shoot-around before going to Redbird for the state championship game. They were undefeated, 37 and 0. They could win a fifth state championship in six seasons. At 9:25, they heard Becker say they needed to lock down the other team’s best player. He used no name, a number, “number 24.” Olivia Remmert would play 24 man-to-man. Remmert is a 5-foot-6 senior who only last week, at the end of her high school career, became a starter, a quick, persistent, earnest defender now asked to do the Potters’ most important individual job in the season’s most important game. Stop number 24, who happens to be a 6-1 all-stater averaging 27 points a game.

“Our three bigs will be here,” Becker said, and by “bigs” he meant Lindsey Dullard, 6-foot-1, Katie Krupa, 6-2, and the 5-7 Jones. The coach wanted those three lined up across the paint, no more than a step in front of the basket, always with a foot in the paint. The idea was to keep Simeon’s true bigs (6-1, 6-2, 6-3) off the offensive board. Coaches call that a gimmick defense, a “triangle and two,” the bigs at the base of the triangle, Remmert glued to 24 with Dearing flying wherever she knew she was needed.

Maybe 10 minutes after 1, at the press table, a writer asked, “So what do you think?”

Maybe it was 10 minutes, maybe 15, but soon enough the Becker plan worked so well – Remmert in number 24’s face, the bigs keeping Simeon off the board – that the Chicagoans missed their first 13 shots and got one offensive rebound in that time.

For 10 or 15 minutes of real time, Morton was beautiful in every way a basketball team can be beautiful. Ball movement, inside and out. Bodies slamming against rebounders to move them out. The Potters threw in three 3’s in a minute, bang bang, bang. Simeon finally scored with 1:41 left in the quarter.

It was 21-12 when Morton brought the ball up-court in the last seconds of the first half. Simeon watched as Dullard stood with the ball three or four steps past mid-court, 30 feet out. Then, well, why not? Flat-footed, Dullard put up a shot.

With the ball in the air, the buzzer sounded, the red lights on the backboard lit up, and Dullard’s shot fell through, nothing but net.

About 2 o’clock, then, the Potters ran smiling into the locker room.

By 2:30, the Potters no longer led by 16. “Maybe we ran out of gas,” Becker said. Slowly but with a seeming inevitability, Simeon, bigger and stronger, used a full-court press to close the margin. Simeon scored nine straight points early in the fourth quarter and led, 38-37. Morton went up 42-38 and led again 44-43 with 50 seconds to play only to give up the game’s last basket to one of the bigs they’d kept off the boards all day. The girl had scored once in the game’s first 31 minutes and 57 seconds.

Now it is 3:35 and two sportswriters wait at the tunnel near the Potters’ locker room. Five minutes, 10, maybe 15 minutes, we wait. When the players walk past us, I touch Olivia Remmert’s arm and she stops. “You were fabulous,” I say, and I say that because number 24, a big-timer, didn’t score in the first half and wound up with 8 points. Remmert says only, “I really thought we had it.”

Courtney Jones stops. She’s a senior. Since grade school, she had dreamed of being a Potter. She’d played on two state championship teams. She put up a shot to win another, a shot in the air, the buzzer sounding, the board’s lights lit up, the shot beautiful in the air, and she said, “I was just hoping it would go in.”

Outside, the team bus waited.