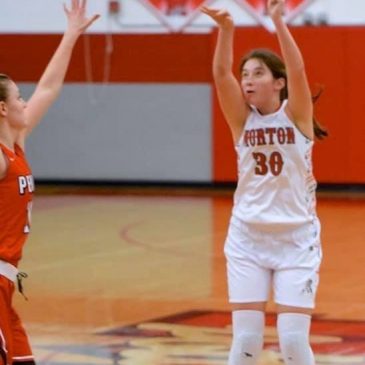 Here’s what Maggie Hobson does when she misses a 3-point try from the right side. She moves to the top of the key where a rebounder gives her the ball again. With no hesitation, she misses her second 3 in five seconds. All in the first minute of tonight’s game at the Potterdome.

Then came an airball on her third 3. Jerked it way left.

So she’s 0-for-3 from outside and the first time she touches the ball in the second quarter, what does she do? Does she get rid of it before she’s tempted to shoot again?

Not on your life.

Next touch a minute later, at high noon, BANG!

“I kept shooting,” she said, “because Coach has confidence in me,” and the coach, Bob Becker, said, “Shooters shoot.” Two misses in five seconds followed by an airball? Not to worry, Becker said. “Maggie’s got a definite green light.”

By game’s end, the junior guard had made 5 3’s and scored 17 points as the Potters moved to 3-0 in this virus-abbreviated season. Reaching into the last five Mid-Illini Conference games five seasons ago, Morton now has won 64 straight league games. (The 65th is likely Thursday night at Pekin.)

Save for Hobson’s shooting and Katie Krupa’s relentless work inside (which earned her 19 points), the Potters did little offensively to please the 38 ½ family members who accepted invitations to the game. (My halftime census included an infant in arms. If it weren’t my new book she brought to the game, I’d remark on a woman seen bringing a new book to the game.)

But the offensive problems didn’t much concern Becker, who saw what he has always liked best: defensive work so persistent that it can produce victory even on nights when shooting-shooters go 0-for-forever. Becker ran gimmick defenses all night – trapping zone, box-and-one, full-court press – that gave Pekin no oxygen in the fourth quarter when it most needed it.

“We won it at the defensive end,” Becker said. The Potters lead was only 27-22 with little over a quarter to play. From then on, Pekin scored only two field goals, both of the desperation 3-point kind, as Morton went on a close-it-out 17-6 run that included the game’s last eight points.

Krupa’s 19 points led Morton, with Hobson at 17. Raquel Frakes had 4 and so did Paige Griffin, who got hers on late-game back-to-back steals that sealed the deal. Maria Lopko was among the Potters who did not score, but her pre-game delivery of Milk Duds pleased the new author. (Have I mentioned my book?)