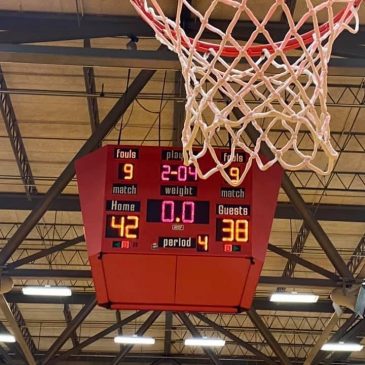 Well. Only local folks were allowed in Pekin’s Dawdy Hawkins Gym tonight (a Mid-Illini Conference rule in these Covid times). And the techno-genius in me was unable to connect to the video streaming of the game.

What little I know came from dispatches filed by correspondents dragooned for the night. One was a friend in Morton, another in Pekin, and a third worked from high above West 108th Street in New York City (whose last text read, sadly, “And the band plays the Dragons song”).

A consensus: the Potters, now 2-1, could get nothing done offensively against the Dragons, now 1-3. They scored only five points in the decisive fourth quarter.

Just guessing, but the way Pekin played Morton two nights ago (while losing 44-28), the Dragons must have closed down hard on the Potters’ best scorer, Katie Krupa. (A text: “She’s getting pretty beat up.”) Then Pekin could dare anyone else to shoot. In both Pekin-Morton games, only four Potters scored.

The defeat ended Morton’s 64-game winning streak in the Mid-Illini. The Potters last lost to a M-I team, East Peoria, on January 22, 2016. Six weeks later, those Potters won the first of the program’s four state 3A championships. Nothing so nice will follow this defeat; the virus has shut down state tournaments. Morton’s season ends with a conference tournament March 11-13.

The Potters get back on the horse at 12:30 Saturday afternoon at Washington.