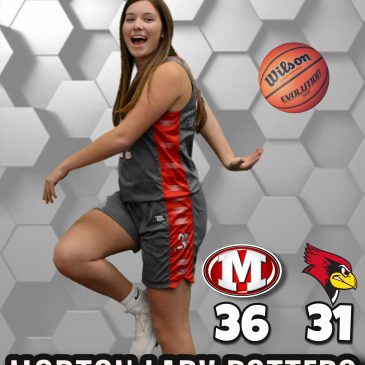 “First 6 possessions are turnovers.” So read the dispatch from my far-flung correspondent in Metamora. A second or two later, this: “Correction. 7 now. Gracious be.” Then an air ball, worse than a turnover. By my count, the first 10 times the Potters came to the offensive end, they got zip, zilch, nada, nothin’ done. Gracious be? No. This called for a holy jumpin’ Jehoshaphat!

So Metamora led after a quarter, 7-1. As bad as that sounds, the reality was worse. Counting the second half of Thursday night’s victory at Morton, the Potters had played three consecutive quarters against Metamora in which they had scored 4 points, 2 points, and 1.

At halftime today, ahead 19-15, the Metamorans came back to the court quickly, warmed up some, put up a few shots to kill time. They had reason to be comfortable. Meanwhile, the Potters were still in the locker room. They came onto the court only in the last seconds. No warming up. No shooting around. Their late entrance was intriguing. Watching by PC from home, I wondered what coach Bob Becker might have said at halftime that took so long?

Nothing, really. He answered by text on the bus ride back to Morton: “Chance to regroup and refocus. No yelling. Our first-half warm-up was done and it was another opportunity the 2d half. Cut down turnovers. Stay poised and composed. After all, we were only down 4.”

Becker believes the first three minutes of any second half are critical. In this one, his Potters wasted no time. The first trip, Maggie Hobson made a 3-pointer from 10 o’clock on the arc. The Metamora lead, once eight points, was one. As small as all the people in gray road uniforms looked on my PC, their body language said it was their time.

The first take-charge moment came on a Katie Krupa spin move and long-stepping drive down the right side of the lane through traffic. Just when she seemed lost to sight, she reappeared on the low block putting up an underhand toss that touched the board softly and fell in.

Next, Hobson scored, and I wish I could tell you how she did it, but she disappeared in the dark live-streaming shadows under Morton’s basket. Anyway, invisible or not, it still counted two points and gave Morton the lead for the first time at 22-21. It never again trailed. After the “Gracious be” start left them behind, 9-1, the Potters outscored Metamora 35-22.

It did that good work two ways. On offense: Krupa, despite being grabbed, bullied, and bounced around by Metamora’s defenders, worked without rest inside; and Hobson relieved some of that interior pressure by making three 3-pointers. More important, defense again won this one for Morton. This time, for instance, it was Metamora, in the critical third quarter, that could score only four points against an array of defenses that included the rare box-and-one with pestiferous Paige Griffin assigned to pester Metamora’s best shooter.

“Find a way, make a way,” Becker said. “I love the growth we’ve made growing and connecting as a team. Fastest way to build this connection is at the defensive end. We hung tough., persevered, earned the sweep, and another W! Lots of big moments.”

Hobson led Morton’s scoring with 16 and Krupa had 15. Griffin and Raquel Frakes had 2 each, Addy Engel 1.

Morton is now 6-2 in the Mid-Illini Conference, Metamora 6-3. The Potters next play Tuesday night at home against East Peoria (1-7).