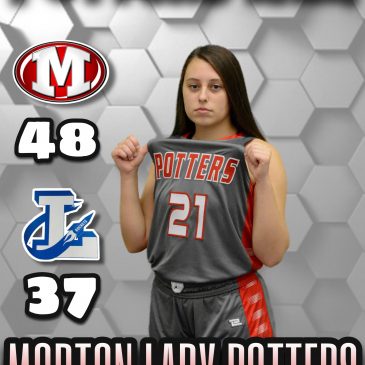 The Potters scored the game’s first 10 points and they won by 11. Nothing much thrilling happened in between. Maybe if I were in the Limestone gym, I’d have been excited. Because of covid restrictions I watched from home on YouTube. Not to say the livestream camera was far from the court, but it was like watching basketball from under God’s chin.

Good thing I had my right eye polished today. Yes, the eye doctor said I needed the right eye “laser polished.” The cornea lens implanted long ago after cataract surgery was old and dirty. A laser beam would fix that. Took 28 seconds. No pain. A world gone gray lately became sparkly with reds and blues. I celebrated with lunch at the Really Truly Golden Arches with the 2-for-$5 fish filet deal (with a Diet Coke $6.64, rounded up to $7 for Ronald McDonald House.)

So the game arrived on my PC in bright colors. But, look. When Morton’s 9-2 and Limestone’s 2-9 and the players are indistinguishable, I can step away from the game a minute. Bake chicken cordon bleu. Also, wash not one but TWO loads of clothes. Such was my Domestic Hero mood tonight that I had the washing machine and dryer running simultaneously. (A friend, the mother of five athletes, has a laundry room with double-decker washers/dryers. She can run all FOUR at once and replenish on the fly. I am unworthy.)

Things worked so smoothly that it didn’t really bother me when there was no sound on the game. I mean, we’re not going to get Todd Bisping and Troy Dowell doing commentary from Limestone. Nor did it bother me when my far-flung correspondent on the scene reported the first-quarter score as Morton 16-6. On my PC, it was 10-0. Thus alerted, I tried the “LIVE BROADCAST” button and got the LIVE BROADCAST. Brilliant.

Then I remembered that my PC sound comes from speakers set behind the monitor. I reached back there and clicked the speakers to ON. Amazing. Still no commentators, but shoes squeaked and basketballs bounced. Early in the third quarter, Morton led, 30-11. Rest of the way, I folded clothes.

Now 10-2 in Mid-Illini Conference play, the Potters still have a chance to win the regular-season championship. They go to Dunlap (11-1) Thursday night with a rematch at the Potterdome on Saturday afternoon. Two victories would give Morton its seventh straight M-I title.