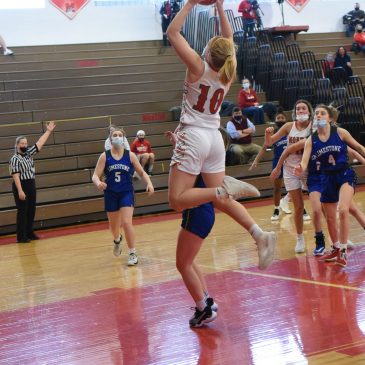 We could start with the Potter dad who came out of the bleachers during live action and loaned his mask to his freshman daughter, Addy Engel, after hers fell apart. Dad’s nice work was rewarded when Engel made three big plays when the Potters most needed three big plays.

Or maybe we should start with the Potter senior, Raquel Frakes, who made a high-flying rebound play and crash-landed in the paint as a teammate scored a game-turning put-back. Frakes saw it all from floor level while seated and later explained, “When I fell, I didn’t want to scare my mom.” (She injured a knee a year ago). “So I made sure I landed on my butt.”

We could quote people. Senior Cailyn Cowley: “That was fun.” Morton’s coach, Bob Becker: “It was our best game of the season.” Frakes: “We wanted redemption.”

Two days ago, the Potters lost at Dunlap by 16. This afternoon, they won going away. Losing to Dunlap ended the Potters’ six-year run of Mid-Illini Conference championships. Redemption began this afternoon as the Potters set up a possible rubber-match with Dunlap in the conference tournament final next Saturday.

Today they beat the new champs in ways that Becker’s teams have always beaten people – with aggressive defense (so good that Dunlap, which made 25 free throws Thursday, didn’t shoot one today), relentless work under the boards, and offensive movement that puts shooters where they can best shoot. Two days ago, Dunlap’s three best players scored 49 points; today, those three scored 14. One was reduced from 19 to 6 this time by a persistent defender who really enjoyed the day. “None against me,” Frakes said, smiling. “We were really focused today. We came to play.” She also said, in case Dunlappians wondered, “We’re definitely the better team.”

First, Katie Krupa rimmed out a short shot from close on the right side. She rebounded the miss and put up an awkward second. And here came Frakes. Behind a bunch of people and not able to get her hands on the rebound, she did something better. She tipped the ball toward her teammate, Cowley, on the left low block. Cowley scored. From her new seat in the paint, Frakes rose in celebration and hurried back on defense. Morton’s lead was 7 with 4:09 to play.

After a defensive stop, next time down, Morton needed no dogged brilliance. They needed to slide a dagger into Dunlap’s heart. They did it from the top of the key, from high noon on the 3-point arc, the killshot delivered by junior Maggie Hobson. “Luckily,” she said, “it went in.” Nothing lucky about it. Hobson had ended the third quarter with back-to-back 3’s and this one raised the Potters’ lead to 10 with 3:45 to play. Dunlap, dead.

To make certain of that, here came the freshman Addy Engel, by now having traded her dad’s Ohio State-red mask for a team regulation-blue. “One earpiece on mine had snapped, and I saw Dad come out with his,” she said. Later, not once, not twice, but on three straight possessions in the last 2:22, Engel scored on driving layups along the left baseline. “I played confidently,” she said, a truth attested to by her 11 points that included an early 3-pointer.

Krupa led Morton’s scoring today with 14. Engel had 11, Frakes 10, and Hobson 9. Cowley had 4, Sedona McCartney 3, and Faith Hostetler and Graci Junis each had 2.

The Potters will start the conference tournament Thursday night at the Potterdome against the league’s seventh-place team, likely Limestone.