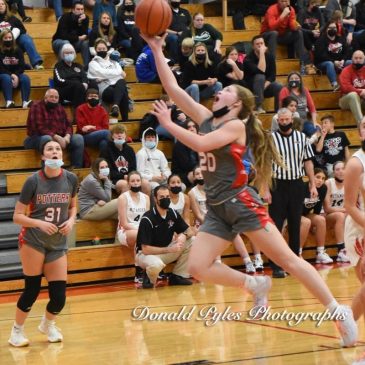 With just over a minute left in the first half, here came Graci Junis to wake me up.

Not that I was dozing off or anything, but the score was 24-7 on its way to whatever Morton wanted it to be.

Junis is a 5-foot-8 sophomore, a star on the school’s regional-champion volleyball team this season. I know nothing about volleyball. I didn’t need to know much to like what I saw of Junis in the Potters’ sectional volleyball loss to Washington. I saw a good jumper who was quick and aggressive at the net. Those strengths suggested she’d be an important basketball player this season. She was, after all, a starter in the Covid-abbreviated 2020-21 season.

“I just lost it somehow after volleyball,” she said tonight, mystified that she’d become a reserve playing mostly on the jayvee team. She said coach Bob Becker and his assistant, Dakota Neisen, “sat me down and said, ‘You got it in you, Graci,’ and talked about ‘competitive fire.'”

So here’s a happy note I made late in the second quarter tonight . . .

“Graci again RE at buzzer”

The Potters, coming off a hard loss to Peoria High last weekend, could not have expected to prove much tonight. They’re now 17-3 for the season and lead the Mid-Illini Conference at 8-1. East Peoria is 1-17, 0-8.

Bob Becker came out of his team’s locker room smiling. “Happy to be back in the Potterdome,” he said.

His team had not played at home since Dec. 11. Eleven straight road games, three of them losses.

The coach then said, “The first half, we really got on the offensive glass — Graci came flying! It was fun to see her playing like that. She just had to find her competitive fire. We talked to her about it, and tonight she cut loose.”

The breather precedes what promises to be a testing Saturday in Galesburg. As part of Galesburg High’s annual Winter Classic, the Potters play Lincoln at 1:30 and Galesburg at 6.

Katie Krupa led Morton’s scoring tonight with 14. Tatym Lamprecht (two 3’s) and Ellie VanMeenen (three 3’s) had 12 points each. Izzy Hutchinson scored 5, Paige Chapin and Junis 4 each, Maggie Hobson and Emilia Miller 3 each. (Paige Griffin, the starting point guard all season, suffered two fractures in her right wrist at Peoria High and will not play again. Addy Engel, also a starter, remains out with a back injury; her return is uncertain.)