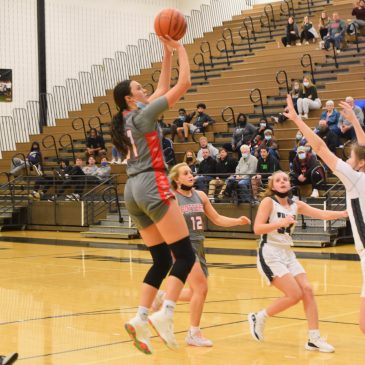 Who knows what this means in the long run, and who really cares, because what it means right now is that these Lady Potters can beat anybody at any time.

“The post-season is going to be crazy,” she said, and if it’s crazy she sees coming, bring on crazy.

“She dominated,” Bob Becker said, and in case the hard of hearing didn’t catch the drift, the Potters’ coach went to upper-case letters with an exclamation point, “She was DOMINANT!”

Let’s ride the way-back machine to January 24, 2015, a time before the Lady Potters had won one state championship, let alone four. They were just another really good team when they came to Galesburg for their two-games-in-a-day part of the Galesburg High School’s annual Winter Classic tournament.

That day became a turning point. Yes, the same words we heard from Katie Krupa today. Already pretty sure of themselves, the Potters that day, led by Chandler Ryan and Brandi Bisping, won easily against two legendary Illinois powers, Quincy Notre Dame and Galesburg. They won each game by 16 points — about what the Potters did today in beating good Lincoln and Galesburg teams by 9 and 19. They’re now 19-3 with six regular season games left before “crazy” begins.

After those games seven years ago, the endearingly-confident-an-inch-away-from-unbearably-cocky Chandler Ryan predicted a state championship.

“We’re winning the rest of our games,” she said.

That turning-point day in 2015 was extraordinary for Ryan’s prediction but became nearly unbelievable for what Brandi Bisping did. Of all of Bisping’s sensational work in leading the Potters to the 2015 state championship (and the ’16 and ’17), she was never better than on that day. She scored 27 in the first game, 29 in the second. She made 15-of-18 field goal tries and 19 of 20 free throws. (Yes, 38 shots taken, 34 made.)

I never expected to see anything like it again.

And then today came Katie Krupa. The 6-foot-1 senior all-stater scored 52 points, 24 in the first game, 28 in the second. She was 16 for 17 at the free throw line. I didn’t keep track of her field goal attempts, but when she scored the Potters’ first 14 points against Galesburg, her five field goals came at point-blank range, low in the paint, right where Becker wanted them. In fact, when Krupa missed a couple in there, even with a 17-6 lead late in the first quarter, Becker chose to remind his star she shouldn’t do that. He sent in a reserve and left a seat open near him for Krupa. “That’s what a bench is for,” the coach said.

She sat there a minute or two.

Then the quarter ended, and about 30 seconds into the second quarter, Becker turned to face Krupa and said, in the way coaches say things to which they want a positive response, “READY?” His tone suggested three or four ????s at the end of that not-really-a-question-but-an-order.

Well, of course, she was ready, for she’d been ready all day on a day when she made sure the Potters would trail one time and one time only and that time for only 25 seconds, behind Lincoln, 13-11. In Krupa’s first two minutes back against Galesburg, she scored four points in a 10-point run that left Galesburg forever behind, 32-14.

“Maybe she’d individually ‘settled’ by then,” Becker said of his wake-up call. “But she can be dominant and that’s what we need, to just keep pounding away inside with her.”

Krupa said, “Coach was pushing me because he didn’t want me settling. Everybody was doing a great job of getting the ball in to me, and I had to take it to the rim or draw a foul and get to the line.”

Wait. One more thing. Guess what happens next Saturday night at the Potterdome?

Remember how today’s game reminded us of that game seven years ago?

Saturday night, the Potters will retire the jerseys of Chandler Ryan and Brandi Bisping.

Lord, how time flies when you’re having fun.