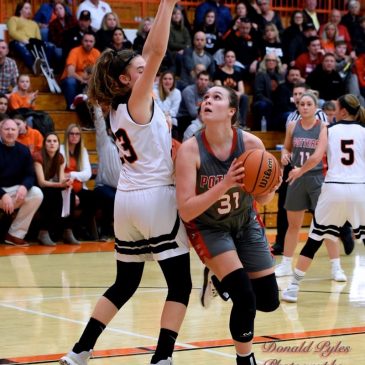 Everything Katie Krupa did tonight was done beautifully, even the knocked-on-her-butt things, or maybe especially those things, for what she did a couple dozen times was get up and say, like, “Is that all ya got?”

Career high 29 points, and she played a minute in the fourth quarter.

Rebounds, all of ’em that mattered.

“Katie’s being double- and triple-teamed,” her coach, Bob Becker, said, “and she’s even scoring on those.”

As Becker spoke, we stood on the Canton court maybe 50 feet from the Potters’ locker room.

Sounded like (from what movies have taught me) a slumber party gone raucous…..

And why not? They’re now 20-3, they’re 9-1 in the Mid-Illini, they’ve lost to a very good Peoria High team and proved resilient enough a week later to win two hard games in the Galesburg tournament against 17-victory teams and tonight bounce along Route 24 to Canton and bounce the Little Giants to sleep.

Besides all that, their coach, Becker, famously hard to please as all Hall of Fame coaches are hard to please, was pleased on the way to being seriously pleased and smilingly delighted.

“I like where we are,” he said. “The kids played really hard tonight. We’re going in the right direction with a big week coming up.” Thursday the Potters play Metamora, the only Mid-Illini team to beat them this season. Saturday, they play Washington. Mid-Illini games don’t get bigger than those.

In a minute here, we’ll get back to Katie Krupa Katie Krupa! But first, let me say my favorite moment of the night did not involve her at all.

It went like this. Graci Junis wanted the damned ball and a Canton girl made the mistake of thinking she could win a wrestling match against Junis. Nope. Junis ripped the ball away and the two of them went ker-lumph at the Canton end. That started a pile-up in the paint, for here came the Potters’ Izzy Hutchinson throwing herself on top of the Junis/Canton heap. What a kerfuffle it was (whatever a kerfuffle is) and it caused the basketball to squirt sideways a couple feet and here came Maggie Hobson speeding into the wreckage on a white horse (really) to scoop up the ball and head up a stampede toward the Morton end where . . .

. . . she skidded to a halt at the free throw line extended and dropped a pass to Tatym Lamprecht, who’d caught a taxi down the right side (I think) and went up for one of her pretty-as-a-rainbow 3-pointers that . . .

Anyway, when Katie Krupa Katie Krupa! came out of the locker room, I asked her where she hurt, for surely she hurt in multiple locations, having been double- and triple-hammered all night long.

Of course she said that.

She’d been struck above the right eye by a Canton body part, an elbow maybe. She’d been hurled onto her back and shoved down against a goal support. She’d been upside-down and right-side up and the most she’d say about all that is that, well, yeah, her neck did kinda hurt, but for nothing Canton did.

“Coach got kind of excited, I guess,” she said, and when she came out of the game for good, Becker thought to praise her with a coach’s slap of appreciation that turned her head on its swivel. She laughed. “I don’t think he realized how strong he is.”

Like Becker, Katie Krupa Katie Krupa! is feeling good about the way the Potters are playing.

“If I can’t get to the basket,” she said, the double- and triple-teaming tactics give her chances to make passes. “We’ve got great shooters in Maggie and Tatym, and great attackers in Izzy and Ellie (VanMeenen). It’s a big week coming up, and we’re ready.”