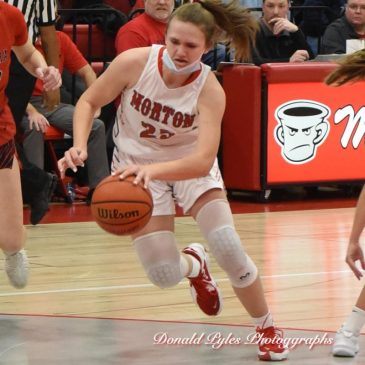 Ten minutes after this one, the Potters’ coach, Bob Becker, was thinking 12 days ahead.

“I believe we can win the regional,” he said. “We can find a way to beat Central on their home floor.”

Yes, yes, oh my yes, I know, forgive me, that last sentence there is one gigantic pot of supposin’, let’s-sayin’; and wishin’ upon a star.

But, look. Remember when America’s darling, Julia Roberts, lost her mind for a minute and married the weird-haired country singer Lyle Lovett? Since then, I have believed that ANYTHING can happen.

So there is that. And Becker saw enough good in today’s defeat to say, “I don’t believe in ‘moral victories,’ but I said to the team afterward, ‘Why would we play them?'”

The game against Normal Community was a last-minute improvisation when both Normal and Morton lost scheduled opponents and scrambled for a game that would help prepare them for the post-season. Morton might have searched for a cupcake victory; instead, Becker wanted a test.

“We played them because they’re a good team, they’re a 4A state-ranked team,” he said. The Lady Iron would be a real test, a team with a 20-6 record in the state’s highest level of competition. It’s also a team good enough to have Peoria Central beaten, only to lose by a point when it missed on the front end of a one-and-bonus with 1.3 seconds to play. That was a week ago.

“And after their terrific start today,” Becker said, “we won the last three quarters.”

Seventeen seconds into the second quarter, Normal Community had made seven 3-pointers, one a minute after they made their first one. (They made only two more all day.) At that point, they led, 24-13. Becker’s silver-lining math, then, was correct. From there on, Morton outscored the winners, 36-34.

In fact, from that 11-point deficit Morton found a way to get the lead at 36-35 midway through the third quarter. The Potters did it with a 10-0 run achieved in a minute and a half. Katie Krupa started it at 4:04 with four straight free throws earned on shooting fouls. Tatym Lamprecht and Ellie VanMeenen followed with a pair of 3’s from the left side to give Morton the lead at 2:34 of the third quarter.

Normal Community took the lead back immediately, never again trailing. It sealed the victory with six straight points when Morton’s offense — fitful at best on a day of turnovers galore — went totally silent from 5:30 of the fourth to 1:37. As Morton has done to so many teams in the last seven years, Normal Community closed the deal with a ball-control offense that produced eight free throws in the last minute.

“We just gifted them points at the end,” Becker said. “Gifted them! That CANNOT happen.”

In those last 5 1/2 minutes, profiting from Morton’s failures, Normal Community outscored the Potters,14-7.

Now 22-5, the Potters close their regular season Tuesday at the Potterdome with a Mid-Illini Conference game against Limestone. Victory would give the Potters a share of their seventh straight Mid-Illini championship. The Peoria regional starts the next Tuesday.