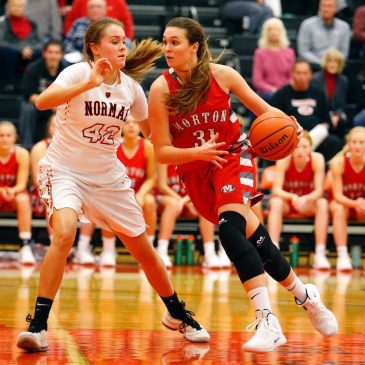 Sunday, about noon, Courtney Jones texted Bob Becker. She wanted to go to the Morton High School gym and shoot. Most Sunday noons, most girls basketball coaches snooze through Sunday afternoon football. Becker was at the gym, doing whatever a coach does when his two decades of teams have racked up a zillion W’s and three state championships. He sent a text back to Jones, a junior, saying, “I’m here, come on over. Do me a favor, Court. Bring me a Number 12 from Jimmy John’s.”

Jones had already commandeered her father as rebounder for the shooting session. Then she said, “And bring your credit card, Dad. Coach wants a Number 12.”

Don’t you love it when things work out? The junior, a two-year starter, comes to the Potterdome for an hour of shooting on Sunday. Two days later, she is a shooting star in the Lady Potters’ 57-52 season-opening victory at Normal Community. And not just an ordinary victory – on the road against a team that is state-ranked in Class 4A (with three D-1 commits) and was undefeated in four games.

Maybe the Potters win it without Jones throwing in four 3-pointers, one in each quarter. Maybe they come from 12 points down late in the third without her. Maybe they create momentum with something other than her back-to-back 3’s that told Normal Community trouble was on the way.

Or maybe not. Anything less than what Jones did when she did it, Normal Community might have extended that 12-point lead to 20, Game Over.

Jones made two free throws at 3:27 of the fourth to give Morton a 47-46 lead, its first since the score was 8-6. From there, the Potters’ senior star, Tenley Dowell, took over. She scored on three straight trips, first from 15 feet, then on a slashing drive for a layup, last with a steal near mid-court that she converted into a breakaway layup and a 53-51 lead with 55 seconds to play. She had not scored since 1:54 of the second quarter.

Twice in the game’s last 30 seconds, Normal Community was forced to foul Dullard. She all but raced to the free throw line, eager to get the ball in her hands. “Oh, I was confident,” she said. “I wanted to make them and win the game.” Which she did, four in a row, two at :27.9, two more at :18.2.

All W’s are beautiful, true. It’s also true that some of the beauties come with more sweat than others. Becker used 11 of his 14 players in the first half, looking for someone to make something happen and finding no one. That half was an especially sweaty 16 minutes of basketball. That said, it’s only fair to note that three of the Lady Potters’ starters – Dullard, Jones, and Katie Krupa – moved from volleyball to basketball only 10 days ago.

Speaking of Krupa, let’s speak of Krupa. The 6-foot freshman can flat play. She’s strong, quick, and agile. She can score inside with either hand, she has a nice touch from outside, she’s aggressive defensively and on the boards. At the back of the :Potters’ press against Normal Community, she anticipated a long pass, tipped it away, and gained control long enough for Becker to call a timeout. One second later, fouled on the in-bounds pass, Dullard made the game’s last two points.

“I was really nervous about my first official high school game,” Krupa said. “But as soon as I hit the court, it was all gone.”

She was one of four Potters scoring in double figures. Dowell led with 16, Dullard and Jones had 14 each, and Krupa 11. The Potters made six 3’s to Normal Community’s 3. The losers’ star, Maya Wong, scored 14 points – but had none in the game’s last 12 minutes while defended by Dowell and Jones mostly. In those same 12 minutes, by the way, Dullard and Dowell combined for 17 points.

One more thing. That Number 12 at Jimmy John’s? It’s turkey breast with provolone and avocado, dressed with cucumbers, lettuce, tomatoes, and mayo.