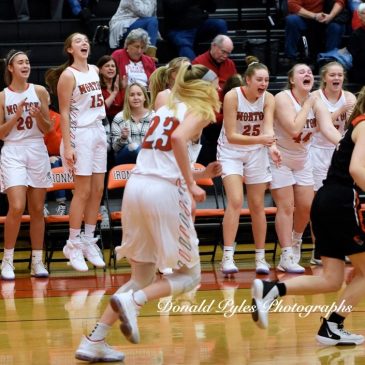 For so long floating above the clouds, the Potters came to earth tonight. For a month, they had made every game a piece of basketball art, beautiful at both ends. Not so much tonight. All those 3’s they’re used to making? All those seamless, flowing plays that end in thrilling buckets? Not tonight. Those defenders so steadfast all season? Missing in action.

Instead of all that, Becker said, “But our kids found a way.”

The undefeated, No. 1-seeded Potters, the defending state 3A champions, found a way to win for the 14th time this season. They found a way to get into the championship game of the State Farm Holiday Classic. They found a way to come from behind in the fourth quarter for the first time all season. And they did it against a 4A team that came in with a 14-1 record built on speed, shooting, a pesky zone defense, and two big people who owned the offensive paint.

All that said, this W was no small accomplishment. Even stuttering and sputtering, for too long bearing no resemblance to the freewheeling Potters who had won their last eight games on running clocks, they move on to the championship game knowing that they had been tested thoroughly by a very good team and survived.

They might have worried that there was no end to the inevitable off-night that every good team suffers. “Nothing was falling for us,” the little guard Peyton Dearing said.

Dear readers of long memory may remember Dearing from a blog done two days ago. Then she told us her shooter’s thoughts after a game in which she made back-to-back 3’s, bang-bang, and decided to pass on a third one. She just had too much time to think, she said.. If she thought she’d make it, for instance, she’d miss it. So she gave the ball to someone else, smiling all the while.

Such thoughts are OK in running-clock games. Up 40, it’s all tickles and grins.

Not so much tonight.

Not when Lincoln-Way West took a 42-41 lead into the fourth quarter.

The worry for Morton was not that it was a point down. The worry was its shooting. Without seeing any official statistics, I would guess that Morton had made 4 of its first 20 3-point attempts – and this is a team with three starters shooting 50 percent or better on 3’s. If they were to find a way, they needed to change that. “We need to keep oiur shooters shooting,” Becker said later.

So, nine seconds into the quarter, the ball came to Dearing on the arc’s high right side.

She’s a shooter. No thinking now. She shoots it.

Dearing’s 3 not only gave the Potters the lead at 44-42, it ignited a stretch of familiar brilliance that produced a game-turning 11-0 run in 2 minutes and 8 seconds.

And Dearing was its beating heart.

Twenty-three seconds later, Raquel Frakes swiped the ball from an unsuspecting Lincoln-Way West player. When I say “swiped,” that’s another way of saying what Frakes would say later: “I pick-pocketed her.” As the ball rolled loose, Dearing fielded it, took one look downcourt, saw Frakes sprinting ahead, and hit her with a long pass for a layup.

One minute later, another Dearing 3 from the right side.

Then, 32 seconds later, after Lindsey Dullard blocked a Lincoln-Way West shot under the hoop, Morton came downcourt flying, now on a mission to set the world to spinning properly again, and who does the ball find?

After which the poor people from Chicagoland called timeout, and the Potters walked to their bench, Dearing weary, happy for the breather, stoic, as if nothing much had happened, as if she hadn’t made three 3’s bang-bang-bang, until Becker reached out to slap her hand, giving her license to smile a little as she reached the bench.

Now Morton led, 52-42, soon led by 14 (having outscored the losers 23-6 in the game’s most important 6 minutes), and never led by fewer than 7. In the final, frantic minutes, winning the way that championship teams win, the Potters made 13 of 17 free throws to stave off any rally by the losers.

The Potters had found a way.

Dullard led Morton’s scoring with 18, nine in the first quarter. Dearing had 14, 11 in the fourth quarter. Courtney Jones also had 14, Katie Krupa 13, Frakes 8, and Maddy Becker 2.