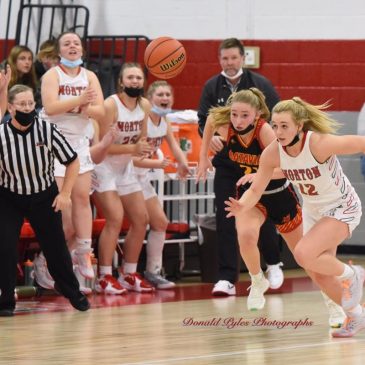 One of the East St. Louis girls, #20 to be specific, had made the mistake of going crazy on 3’s to propel her team to a halftime lead over the Morton Lady Potters in an evening game of Morton’s Thanksgiving Holiday Tournament.

The Potters coach, Bob Becker, had noticed #20. Of course, he noticed. Even over-stuffed-with-turkey sportswriters noticed #20 making six 3’s, half from two steps beyond the arc, all of them rainbows of the most disturbing kind.

The difference is, when Becker, a Hall of Fame coach, notices stuff like that, he does something about it. The first hint of his do-something plan was visible on his coaching whiteboard as he left the bench for the halftime intermission.

On the whiteboard, Becker had scrawled:

And if my typing machine could do it, I’d do what Becker had done. He circled that *20.

At halftime, East St. Louis led, 32-28. And #20 had scored 22 herself. Shakara McCline was her name. She put old timers in mind of a time when Springfield High beat the Potters in a sectional tournament game. Springfield’s Zahna Medley, dropped her 3’s straight out of the sky, so perfect they barely caused a net to shiver.

McCline was close to that good tonight – for a half — until, to be exact, with his whiteboard in hand, Bob Becker told the Potters it was time to do something about that.

They went to a box-and-one defense, meaning Becker assigned little senior guard Paige Griffin to do nothing on defense except stay within an arm’s length of #20 at all times. The other four Potters defenders would play a zone defense.

Not often do a coach’s plans work perfectly. This was a time Becker’s plan worked perfectly — #20 didn’t score in the second half. She got off only four shots, one a 30-foot airball, one a driving layup airball.

Griffin was modest about her work on #20. “I didn’t really do much,” she said, and while she did enough to discourage #20’s movement on the offensive end, it’s also true that East St. Louis didn’t do much to free up the shooter in that half. With Griffin and #20 off by themselves mostly, it became a 4-on-4 game, and that’s a deal the Potters will take every time, especially when the odd girl out is the one that just scored 22 points in the first half.

Meanwhile, the Potters again did what Becker has long preached — they won the third quarter early. They opened on a 9-2 run — two free throws by Addy Engel followed by seven straight Katie Krupa points. And they closed with an 8-1 run — a 3 by Krupa, a 3 by Tatym Lamprecht, and two Lamprecht free throws. A 17-3 quarter. Game over. It wasn’t long after that when #20 tugged at her jersey, the universal hoopster signal meaning, Hey, Coach, I’m gassed, get me outta here.

The Potters’ morning victory over Batavia followed that familiar pattern of a strong third quarter. Aggressive at both ends, Batavia trailed at halftime, 20-15, only to be outscored 15-0 before making a layup with :06.5 left in the third.

Lamprecht and Krupa each scored 17, Hobson and Chapin 4 each, Engel 3, Griffin 2, and freshman Anja Ruxlow had a crossing-the-lane and banking-it-in layup for the first 2 of a Potters career that began, oh, let’s say it began, really, five years ago when, as a fourth-grader, she sat next to me at Potters games keeping her own scorebook.