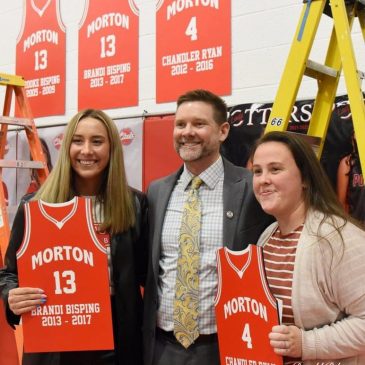 So much to like about tonight, Chandler Ryan in the house, Brandi Bisping embracing her, the two icons sitting at midcourt, feeling applause sent down on them when they took their places in Potters history.

No one will wear Ryan’s #4 again, and no one will wear Bisping’s #13 again. Their numbers are not officially retired. The official language says their “jerseys” are retired, as if old and tattered, sent to the laundry, never to be seen again. Still, before tonight’s ceremony, the Potters’ coach, Bob Becker, said he would never again order a #4 or a #13 (that #13 is now doubly retired, first worn by Brandi’s sister, Brooke). And it’s good we’ll never see those numbers again, because #4 and #13 were the heart and soul of four state championship teams. They should stand alone, undiminished.

Ryan came up from her home in Florida, Bisping came down from Milwaukee, both graduates of Division 1 basketball programs, and it was wonderful to see them both, young and happy, in the Potterdome bleachers tonight.

Too bad they couldn’t un-retire their jerseys for an hour or so.

As efficient as the Potters were two nights earlier in an 18-point victory over Washington, they were careless at both ends tonight.

“What’d we have, 20 turnovers?” Becker said. “Every time they gave us a chance, we threw it away.” He spoke of the game in its entirety, but those words fit perfectly the Potters’ third-quarter play. Hard to believe, but the Potters scored only 5 points in the first quarter and 6 in the second to fall behind, 20-11. Maybe Metamora’s defense was that good. Could have been. Still, of Morton’s 20 (or more?) turnovers, too many were unforced, the result of poor ballhandling.

But that third quarter — Metamora’s worst. It had one field goal the first 6 1/2 minutes. And yet it maintained that nine-point halftime lead, going into the fourth quarter up 29-20.

They did it this way: Ellie VanMeenen made a 3-pointer from the left corner at 4:09. At 2:39, Katie Krupa scored down low off a great Tatym Lamprecht pass. In the last minute, the Potters had a chance to take the lead. First, down 35-33, Izzy Hutchinson made a steal at mid-court with 1:20 left. On that possession, Morton somehow won two scrambles for offensive rebounds and moved the ball to Krupa at the free throw line. Her 17-footer tied the game with 37 seconds to play. Until that point, Metamora had led all the way.

Holding for one shot, Metamora was able to avoid being sent to the free throw line. Just as important, it was also able to control time by calling two timeouts, the first with 23 seconds left, the second with 11.8 seconds on the clock.

Out of the second timeout, Metamora worked the ball into the paint and to the deep left corner where Alyssa Russell was unguarded.

“I felt confident the whole game,” Russell said later. “It was designed to go to the post, and she kicked it out to me. It was a good shot.”

She made the 3-pointer with :03 showing on the clock.

Morton was given a timeout at :01.4, meaning that perhaps a second was lost in the frenzy. The Potters then failed to connect on a long in-bounds pass and time expired.