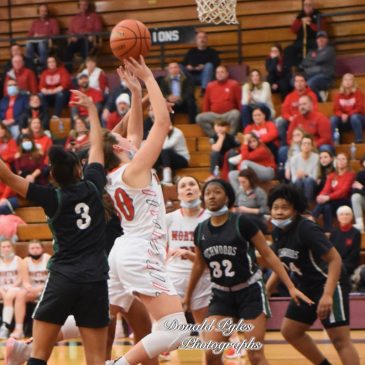 Afterwards, Katie Krupa sat there in a hazy daze of exhaustion, happiness, and pain literally from the top of her head to her ankle.

No wonder she couldn’t make out what I said.

I said it again. “You were heroic.”

She smiled, kind of, a tiny smile, puzzled.

It’s that she did most all of that after she collapsed on the floor not once, not twice, but three times, first after a collision caused an upper leg cramp, second after she rolled an ankle, and third after cracking her skull into a Richwoods nose.

We’ve seen NFL players with leg cramps. From out of nowhere, three or four trainers sprint onto the field. They surround the guy. They minister to his pain. Tonight, when Katie Krupa went down after that collision, here’s what happened. Nothing. Nobody came running to her. Play went on until a referee noticed Krupa writhing in pain. Then Krupa got up and limped to the bench. There, ministering to herself, she bent her leg up to her shoulder, made a fist and started pounding on that cramp, trembling as she did it. And she said something to the Potters’ coach, Bob Becker. “She told me,” he said later, “she wasn’t coming out.”

At that point, early in the fourth quarter, Morton’s lead was 35-28. The issue was in doubt. The season was in doubt. Lose this regional semifinal, the season’s over. Richwoods had trailed by as many as 12 but had closed the gap with a strong third quarter. At 35-28, it would not be good for the Potters to have Katie Krupa on the bench.

After a timeout, Krupa limped onto the court. Four seconds later, at the free throw line extended, she took an in-bounds pass from Izzy Hutchinson and immediately returned the ball to Hutchinson under the hoop for an uncontested layup.

It was two minutes later when Krupa rolled that left ankle and went down again. This time she left the game — for all of 17 seconds. And on return this time, with the Potters’ lead cut to 37-31, Krupa did the brightest thing that only the brightest of stars does. She called timeout. Sounds easy, eh? But do it from the far side of the court. Do it when a teammate, Maggie Hobson, has gained possession with a steal and is about to be tied up. Do it when Becker hasn’t done it. Do it when Hobson was too busy to do it. And when a referee called timeout, he thought the ask for a timeout was so extraordinary that he explained to the official scorekeeper, “Thirty-one called it,” and he said it agan, “Thirty-one,” which is Katie Krupa’s number and there she was, in the far left corner, 40 feet behind Hobson wrestling for possession.

I’m making a lot of that timeout call because, when Becker says of his team, “They made a way, they found a way,” one of the ways they made and/or found was that timeout. It gave Morton the ball. And a minute later, Hobson scored on a layup. Twenty seconds after that, Krupa made a mid-court steal that led to two Tatym Lamprecht free throws and a 10-point lead with 1:46 to play.

Almost over, anyway, except for Krupa’s head-on collision — “THAT hurt,” she said later — that left a Richwoods’ player bleeding from the nose and Krupa sitting on the court pressing a hand against the top of her head, as if she could keep an egg from popping up there.

“It was really two different games,” she said. “The first half, the referees were calling everything, so we were attacking and getting fouls.” She scored 17 points in that half, seven on free throws. “Then the second half, they let everything go. It got really physical.”

Physical? Brutal’s more like it. Ugly. Morton took advantage of it. The Potters made 21 free throws, Richwoods 3.

“We showed a lot of toughness, they’re all warriors,” Becker said. “Everybody in our locker room wanted this one to get to Thursday night.”

Thursday night, Morton (now 24-5 for the season) will play Class 3A’s No. 1-ranked team, Peoria High (25-3), for the regional championship and a spot in the LaSalle-Peru sectional next week. A month ago, Peoria beat the Potters, 41-32.