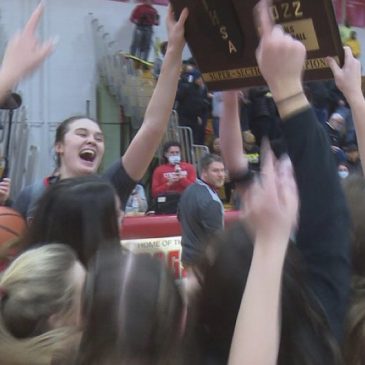 These kids, don’t they know we’re old? These basketball games of the last two weeks, they’re roller coasters slowly grinding to the top, and then…OMG!!!….we’re falling out of the sky in a rocket contraption designed to scare us into fits of screaming heebie-jeebies, sometimes known as prayers.

C’mon, already, girls, enough’s enough. Peoria 10 days ago, we’re down four. Washington four days ago, we’re down three. This is in the fourth quarter of win-or-go-home games. Tonight, we”re down again after being up by 15, we’re down in the fourth quarter again, by a point this time, and these kids, such as the freshman Ellie VanMeenen, will tell us, “It was really fun,” and the senior Maggie Hobson will speak of a “whirlwind of emotions,” and all the teenage celebrants will be right because, after taking everybody to the top of the sky, they said, “Hold on, Old Folks, not to worry, we got this.”

In 25 seconds, what the Potters did was bring the ball up-court against Marian’s tenacious, aggressive full-court press . . . .

Against Marian’s tenacious, aggressive 2-3 zone defense, let’s say point guard Izzy Hutchinson settled out front and looked for a way to get the ball to Katie Krupa above the free throw line. I’m not sure of what happened once Morton got across the mid-court line. Too much happened all night to keep track of every zig that led to what zag. And the more tenacious and aggressive Marian got on defense, the more effective the Potters got on offense. “We had to match their intensity,” Hutchinson said later.

Anyway, and I am absolutely sure of this, from her spot in the free throw circle, Katie Krupa moved the ball to Tatym Lamprecht, the little guard who was set up a step behind the arc on the left side.

Early this season, I told Bob Becker, the Potters’ coach, that I wished Lamprecht were less shy about answering questions from a man with a notebook. Becker said, “She’ll find her voice on the court this year.”

“I felt confident,” Lamprecht of the 3-pointer, using her other voice, the whispering one.

The Potters had trailed, 9-7, before going on a 13-0 run that produced a 23-11 halftime lead. Once content to throw up 3-pointers over Morton’s man-to-man defense, Marian scored eight field goals in the paint to move within 34-30 entering the fourth quarter.

“Our girls didn’t collapse,” Becker said. “They stayed positive. What we’ve been saying, ‘Stay in the moment.’ They weren’t thinking about what just happened or what was going to happen. It’s a mental toughness that they’ve had all year.”

This tough: They forced Marian into desperation shots.

This much tougher: Next time down, Krupa took another pass at the free throw line and moved it outside the right arc where Maggie Hobson took it and in that “whirlwind of emotions,” she spoke as loudly as Lamprecht had spoken a thousand heartbeats earlier . . .

“When Tatym made hers, I got confident, too,” she said, adding brightly, “We are the Splash Sisters.”

The Lady Potters will play in Class 3A’s Final Four at Redbird Arena for the sixth time in the last seven full seasons, needing two victories for the program’s fifth state championship in those seven years. Their semifinal is set for 11:45 a.m. Friday against Nazareth Academy of LaGrange, the latest #1 ranked team in 3A.