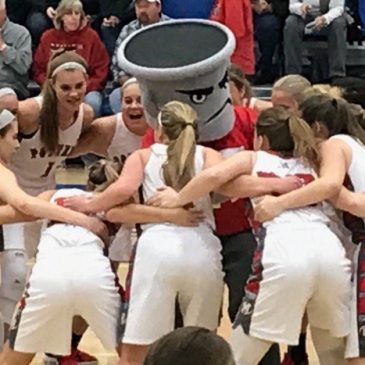 The Morton Lady Potters bounced back big time from their loss over Peoria Richwoods last week, in the Championship game of the Thanksgiving Classic.  Three days of practice in the Potterdome, concentrating on improvement and refocusing their commitment to excellence, had the Potters ready and revved up to face another opponent.

Unfortunately for Metamora, they had the misfortune of having ‘Next’.  The Lady Potters took out some of their frustration at Metamora 50-27, in their first Mid-Illini contest of the season, on Thursday night.  Metamora was down 10-0 before they knew what happened in that game and Morton got a little of their swagger back.  The Potters were powered offensively by balanced scoring attack, with four players in double digits (Lindsey Dullard 12, Tenley Dowell 11, Josi Becker & Caylie Jones with 10 apiece).

On this night, the Potters were better than the Cheesemakers, but the outcome was not decided until the final seconds and the lead changed several times in the final minutes of the game.  It was a fun game to watch, with two talented teams going at each other, back and forth on every possession.  These were two State Championship level teams going toe to toe on December 2nd.  Every shot was a BIG shot and every possession was crucial to the outcome of the game.

The Lady Potters lead 29-23 at the half and had leads of 10 points at different times in the 2nd half, but the Cheesemakers made big shots of their own, particularly their star big shot guard (Hilliard).  Monroe took the lead 53-52 with 1:21 remaining in the game.  With Both teams in the bonus, most of the final quarter, Tenley Dowell hit 2 free throws to give Morton the lead back, then Monroe hit 2 on the next possession for a 1 point Monroe lead, then Courtney Jones sank 2 more with 28 seconds left to put Morton up 56-55.  Game winner right?  Nope.  10 seconds later, Hilliard drives and hits a pull up jumper to put Monroe up 57-56.  Not over yet though.  On the next possession (the final scoring possession) Morton gets the ball knocked out of bounds with 9 seconds left.  Monroe Head Coach (Sam Mathiason),  calls a time out to instruct his players what he wants to do to stop the Potters.  The Potters used the timeout wisely and Coach Becker had the perfect out of bounds play drawn up, which the Lady Potters executed to perfection, with Lindsey “Lefty” Dullard scoring, with a left hand layup, with 8 seconds on the clock and the Potters applied 8 seconds of defense to cause a turnover by the Cheesemakers that sealed their fate and a 58-57 Potters victory.

Dullard finished with 18 points, Dowell 16, Caylie Jones 10, Josi Becker 5, Courtney Jones 4, Peyton Dearing 2, Megan Gold 2 and Kassidy Shurman 1 on a night that every point, assist, rebound, screen, steal and hustle play mattered.  On this night, the Lady Potters learned  when they play as one, execute their roles, communicate, play hard, and compete, they can be pretty good.  Hats off and good luck to the Cheesemakers, who I expect will make a return trip to the Wisconsin State Tournament this year.  If the Lady Potters use this game as a stepping stone to improvement, I expect their chances are pretty good to do the same in Illinois as well.