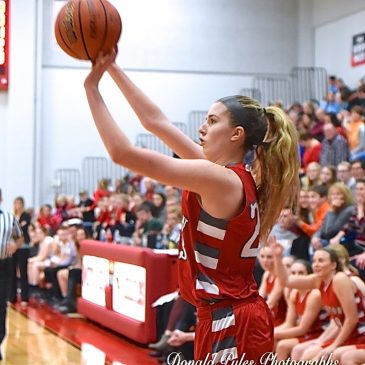 The Lady Potters’ coach, Bob Becker, wrote two notes on the whiteboard he took to the bench before tonight’s game.

A minute into the game, I made my own note. Like those doctors who aren’t doctors but play doctors on television, I am an expert who isn’t an expert but I play an expert on this blog. Here’s my note, scribbled in the second minute when Metamora led, 3-0.

“Morton leaner, quicker, will impose its will.”

One minute later, Morton led, 7-5. After that, the Potters never trailed. What it did was rip Metamora’s heart out and stomp that sucker flat. (Somebody write some music, we got some country lyrics going here.)

This was supposed to be a Big Game. Both teams had 9-1 season records and both were undefeated in three Mid-Illini Conference games. The problem with that is that Morton’s too good for the M-I these days. The victory was the Potters’ 37th straight in conference play. They last lost in the conference on January 22, 2016. (I refuse to say who beat them.)

Early in the second quarter, when it was still kind of a game, Morton’s lead was 21-18. But leaner and quicker is a good thing, and it’s a really good thing when combined with better athletic talent and greater basketball skills. Less than six minutes later, the Potters completed a 16-5 run that gave them a 37-23 lead at halftime.

That run began auspiciously when Lindsey Dullard made a 3-pointer from a full step behind the left-side arc. At the same time, Morton’s defense had rendered Metamora’s offense ineffectual. As they’ve done consistently of late, the Potters’ defenders seem to be everywhere all at once, jumping dribblers, jumping into passing lanes, jumping anyone so unfortunate as to have the basketball in her hands. I believe the adjective best applied to such persistent, aggressive, attacking defense is RELENTLESS.

Following Dullard’s long 3, Raquel Frakes’ drive to the rim brought her two free throws. Tenley Dowell added a free throw, again the result of a slash into the paint. Katie Krupa’s put-back of a missed free throw made it 29-18. And here came Dullard again. Barely had the ball touched her hands at 2:50 of the quarter before she re-directed the pass into a 3-pointer from the left side. A minute later, on the right side, she did another catch-and-shoot for her third 3. Courtney Jones capped the run with two free throws.

As for Dullard’s daggers, the 6-foot-1 junior said, “My confidence was pretty high. As soon as I make one, I feel good.”

“And I keep shooting.”

Whatever hope Metamora had of a second-half comeback ended a minute into the third quarter. That’s when something happened that caused me to make another of my expert notes. I even circled the note to remind myself of that moment. The note was all full of expertise. It went, “HOW???” Yes, your blogging expert had no idea, none at all, about what he had just seen – or not seen, or couldn’t explain if he had seen it. I mean, HOW did Katie Krupa do that thing she did?

The 6-foot freshman, Morton’s best post player in a longgggggg time, had made a layup of sorts from the right low block – only it was more of a soft, right-handed, 4-foot hook shot, or something (??) that I am yet not able to describe, it happened so quickly and with such apparent ease, as if the 15-year-old had been doing such stuff for a longgggggg time.

Anyway, that Krupa bucket was the start of an 11-4 run that sent Morton to a 48-27 lead. And it wasn’t even the most memorable Krupa move. That one came two minutes later – and your blogging expert did in fact see that one and he can describe it and even give you some history on it. (Earning my Milk Duds here.)

With the ball on the low left block, Krupa saw she could move across the paint. She did. Then she put up a reverse layup – only she did it with her back to the rim and used her left hand to spin it in from the right low block. Yes, her left hand this time. Envision that. Going away from the rim, her back to the rim, twisting in the air, using her left hand to toss the ball behind her and off the board. (If all that sound expert-y, trust me. I have no real idea what I saw. For that matter, neither does Bob Becker, who in wonderment matching mine said, “I didn’t teach her THAT.”)

Steve Krupa did teach her that. He’s Krupa’s father. “My dad has been my coach forever,” Krupa said. “I was in the fifth grade when I saw a girl do that reverse layup. I thought, ‘Cool,’ and I asked my dad, ‘Can I learn to do that?’” The answer was beautifully seen tonight.

Anyway, with Dullard from outside, Krupa inside, Dowell everywhere, and defenders doing their RELENTLESS best to scare the bejabbers out of every Metamora ball-handler, Becker needed only three words in his post-game summary: “That was fun.”