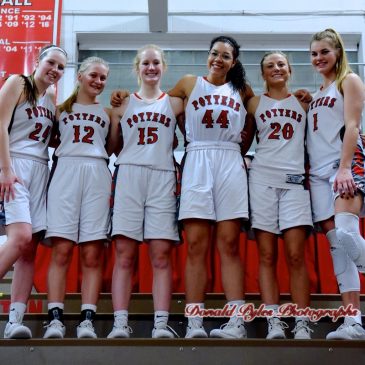 Every year on Senior Night, the Morton coach, Bob Becker, introduces the team’s seniors and their parents. As they walk to midcourt, Becker lists their accomplishments, ambitions, and activities, such as “participates in cadaver lab” and “enjoys reading, baking, art, and general witchcraft.” My favorite part, because I am in need.of wisdom, are the “words of wisdom” he reports from each player, such as . . .

Addi Cox: “Mistakes can be learning opportunities, but try not to make your whole life a lesson.”

Claire Kraft: “Your attitude is always a choice. Laugh a lot and have fun.”

Bridget Wood: “You don’t always need a plan for everything. Sometimes you just need to trust and let go and see what happens.”

Megan Gold: “Be consistently excellent and do it with a smile.”

Kathryn Reiman: “Always be willing to challenge yourself.”

Tenley Dowell: “Self-confidence is the fist step toward success. If you believe it, you can achieve it.”

I kept it shorter. I asked the six old folks for one word that would define their four years in the Potters’ program. Gold: “Fast.” Reiman: “Family.” Kraft: “Exciting.” Wood: “Growth.” Dowell: “Competitive.” Cox: “Inspiring.”

I can tell you what all that wisdom produces. In the last four years, the Potters have won two state championships. In that time their record is 124-10. And they’re not done yet. They are hosts to a regional tournament and begin play next Tuesday.

Yes, there was a game.

Not much of one.

Perhaps because of all the festivities – grand introductions of the seniors – the pep band at its best, cheerleaders and dance squad and co-ed dance squad doing their best stuff – maybe the biggest crowd of the season, both sides of the Potterdome full — Becker giving four seniors a rare start – maybe all that hullabaloo messed with the Potters vibe. Two nights ago at Canton, they’d played near-perfect basketball. Tonight, meh.

Not that it mattered. Morton wouldn’t lose to Dunlap once if they played every other day for the next six months. But somehow the Potters led only 27-24 early in the third quarter. Dunlap had scored the quarter’s first six points. Not that he was worried, but a coach whose team is ranked No. 3 in Class 3A – a coach with designs on his fourth state championship in five years – doesn’t much like it when he’s three points up on a team with a 13-10 record. So Becker called a timeout and said something magical.

I asked him later, “What did you say that was so magical?”

“I don’t have any magical words,” he said. “We started trapping them, getting them out of their comfort zone, which is what we had hoped to do all night. And we made some shots that we hadn’t made earlier. Shooting covers up for a world of sins.”

So, of the game’s 32 minutes, Morton played well about a third of the time. After the timeout, the Potters went on a 30-7 run that lasted 10 minutes and 51 seconds. In that game-turning move, Dowell had 12 of her game-high 22 points.

My favorite part of the night – aside from learning that Megan Gold plays the piano, skis, swims and has held a human brain – came when a referee stopped play. He pointed into the Dunlap section of the bleachers. A woman there apparently had some something magical. It caused her to disappear.

She hadn’t liked a foul called on Dunlap. The player in question had committed, according to my eyesight, approximately seven-11 fouls and had been whistled for only three. But the woman in the stands raised so much ruckus about this particular call that a referee asked Potterdome security to escort her out of the gym.

Told to leave, here’s what she did. First, she stood at her seat in the fifth row of the bleachers. Then she pulled, tugged, and worked her way into a stylish puffy jacket. It’s cold outside. This took some time. The jacket was big and puffy and she was in no hurry. Looked like a nice Dunlap Eagles shirt she had on. Lots of gold trim on her. Picked up her purse. Slung it over her shoulder. Last thing she did, when she got to the first row of the bleachers, she threw a scarf. Seemed to be an aimless throw. Just tossed it. Maybe it wasn’t hers. Maybe she’d found it somewhere.

The Potters finished the regular season with a 26-3 record. They were 14-0 in the Mid-Illini Conference, winning their fifth straight championship (third in a row undefeated) and extending their league winning streak to 47 games. Dunlap is 13-11 and 7-7.