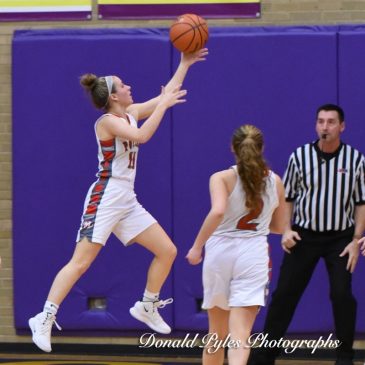 Peyton Dearing was called for carrying the ball. The Potters junior guard had made a steal and took off flying the other way. That’s who she is and what she does. She’s a little thief who can fly. On this breakaway, her second dribble was high. Not a carry. But a zebra blew his whistle. Dearing’s coach, Bob Becker, went, “Huh?” The zebra grunted, “Carry.”

Wrong. Not that it mattered. The Potters were on a 28-0 run en route to a 56-4 halftime lead. Still, the call wrong. Here’s what Peyton Dearing, the first guard off the Morton bench, said she thought of that moment.

Which she did. Next time down, LaSalle-Peru made the mistake of throwing a pass anywhere near Dearing. She intercepted it and took off flying again. This time no whistle, probably because she was out of sight before the zebra could see what happened. At that point, in only nine minutes of play, Dearing had scored 11 of her game-high 14 points.

“She’s playing with urgency,” Becker said, and the coach loves players who bring all his favorite things – urgency, confidence, a high level of excellence – to every possession all night. Now 27-3 and playing tonight at the Potterdome for their fifth straight regional championship and ninth in 10 years, the Potters were so good tonight that the proper response to their performance was to laugh . . . yes, laugh . . .at how easy they made it look.

They led, 20-0, in fewer than five minutes. My favorite two points in that run came from the freshman post, Katie Krupa, who missed everything on a power move from the right side and caught the misfired shot on the left side and scored from there. Becker said with a smile, “We tell ‘em it’s OK to miss. But go get it and put it back in.”

On 11 of LaSalle-Peru’s possessions in those first five minutes, here’s what they did against Morton’s full-court press and trapping defense. They did nothing, as in zero, zilch, and blank-o. Six times, the Potters stole the ball. Four times, they forced passes out of bounds. Once, LaSalle-Peru threw up an air ball, just to see if, maybe, perhaps, they’d get lucky. They didn’t. Insult to Injury Dept.: at the first-quarter buzzer, Courtney Jones made a 3-pointer from the deep left corner to put the Potters up, 31-3.

Then Morton scored the next 23 points.

“I like where we’re at,” Becker said. “One through 14, we’re playing with grerat energy, efficiency, and confidence. We’re playing at a high level every night. I hope we can keep it going for a while.”

Afterwards, the loser’s coach, Hollis Vickery, said CoachSpeak things. Morton is a “very well oiled” team. “You can tell they’ve played with each other a long time, and you can’t teach basketball experience.” “They intimidated us at times.” “They play with such precision.” “Defense is more an illusion than a reality. But their illusion may be better than reality.”

LaSalle-Peru’s little senior guard, Aubrie Roda, said it simply. Two years ago, her team lost to Galesburg in a regional championship game. She thought Galesburg was the best team she ever played. She has changed her mind. She said, “Morton’s 100 times better than Galesburg was.”

I told Vickery, “Morton thinks they can win a state championship.”

Vickery said, “They should think that.”

Peyton Dearing said, “We’re coming together really, really well,” and Becker said, “Our only goal right now is to be 1-0 after tomorrow night’s game. As cliché as that is, that’s how we’re thinking.”