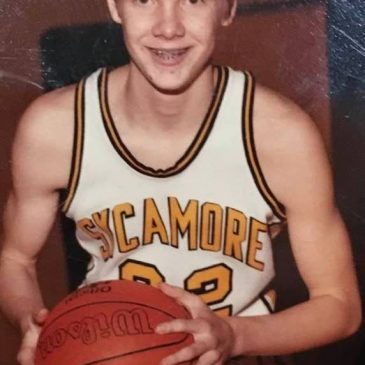 It’s not true that I’m writing tonight’s blog just so we can print that picture of the young Bob Becker.

Has anybody ever been that young?

Look at him, in the gold-lettered jersey of Sycamore High School.

“He looked like he was 17,” Lynn Rudin once said of the Becker who came to work in Morton in 1993, then 24 years old. He’d never heard of the Pumpkin Capital of the World (poor kid) when he attended a job fair at the University of Illinois and came away as an elementary physical education teacher, assistant varsity baseball coach and freshman-sophomore coach on Rudin’s girls high school staff. “And,” Rudin said, “he still looks like he’s 17.”

Only now Becker is 50 and in 20 seasons as the Potters’ head coach his teams have won 490 games – 11-0 this season, on a 21-game winning streak carried over from last year. And his Potters are on a history-making run of four Class 3A state championships in the last five seasons.

Not bad for the perpetual youngster who sat in his Potterdome office this afternoon and remembered his own high school basketball career at Sycamore on fair-to-middling teams. He said, “As a junior, I was the sixth man – and sometimes I didn’t get in games.” As a senior, he became Sycamore’s co-MVP, an off-guard averaging “about 11 points a game, on seven or eight shots a game, pretty efficient.” Here he brightened up. “If we’d had a slick guard who could penetrate and dish out,” he said, “I could’ve made a LIVING at that.”

Such as the night he had 12 points at halftime, only to sit out most of the second half.

“I don’t know why the coach took me out, but he did,” Becker said, still a touch burned. “All I know is I wasn’t tired. Like the other night. Peyton Dearing was on FIRE for us. I wanted her shooting. You don’t get tired when you’re shooting and making them.”

So it was old-home night, sort of, when Sycamore’s girls made a two-hour and 45-minute bus ride down from DeKalb County.

And no matter what the score suggests, Sycamore is good. It had won 7 of 10 games. It has a legitimate Division-1 commit, it has three or four 6-footers who can play, it has shooters (8 3’s tonight, matching the Potters bomb-for-bomb). Sycamore’s only problem was the Potters, who are more than good at the moment and of whom one Sycamore player said, “They NEVER get tired. Constant pressure on defense, constant moving the ball, they NEVER stand still.” In fewer words, the Sycamore coach said, “Just relentless.”

And then, worn out, they have to get back on the thing and go home?

“Be sleeping,” one said, eyes on the way to sleep even as she spoke.

Thing is, they asked for it. It began last summer when the Sycamore coach, Andy Wickness, had a bright idea. Morton had made itself into one of the premier programs in all of Illinois basketball. Besides, there was the fact of Becker’s 1987 graduation from Sycamore.

“Because of what Bob has done at Morton, I picked his brain by email,” Wickness said. “He was very helpful in describing his program’s culture, the fan base, his experiences. I was very grateful for his sharing his thoughts on all that. It’s just that our conference is not very good. We’re winning by 30 and 40 points. To get to the state tournament level, the way Morton has, we need games like this.”

It’s one thing to play Morton when the Potters are playing well. It’s another to play them when they’re playing exceptionally well. On those exceptionally-well nights, the Potters kick butts, take names, and put you back on the bus home, exhausted.

“The game turned there at the end of the first quarter,” Sycamore’s Wickness said. “Our defense let down.”

Well, a defensive letdown is in the eye of the beholder. It seemed to me, for instance, that Sycamore’s defense was just fine. Morton’s offense was simply better. After Peyton Dearing made two free throws at 1:36, Olivia Remmert’s steal gave the ball right back to Dearing for a 3-pointer. A minute later, Lindsey Dullard stole a lazy pass in the open court for a layup. And 20 seconds later, one of Raquel Frakes’s flying rebounds led to the first of Maddy Becker’s five 3-pointers tonight.

Thus did Becker welcome his alma mater to the big time.

“We’re playing at a really high level,” Becker said. “The way we’re playing will win a lot of games.”

What’s most obvious about Morton’s play lately is its – let’s borrow that word from Sycamore sophomore Ella Shipley – constant reach for dominance at both ends. The Potters are on attack constantly. Either they want the ball back or they want to take the ball to the rim.

“We want to attack,” Dullard said, “and we want to get into the paint. If we don’t score in there, we kick it out and” — here the senior smiled — “we ALL can shoot.” Early in the season, she said, there was a turnover problem, maybe 16 a game. No longer. “We’re going to the ball,” Dullard said, a fundamental move that diminishes the prospects of passes gone awry.

Maddy Becker, with her five 3’s, led Morton’s scoring with 21 points. (Another indication of the Potters’ strength: she is the sixth different player to lead the team in scoring this season.) Dullard had 12 poinits, Dearing 11, Krupa 10. Courtney Jones had 7, Frakes 6, Sedona McCartney 4, Makenna Baughman 3, Cailyn Cowley 2.