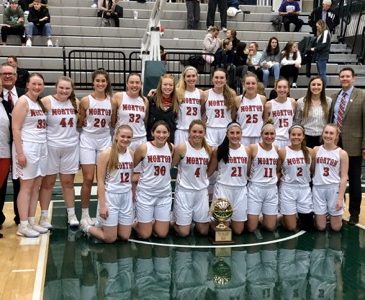 Chicago Marist was trying. It’s a very good basketball team. It had won 14 of 16 games against top-flight competition. Absolutely, the Redhawks wanted to score. They were down 52-43 and needed to make something happen on that first possession of the fourth quarter.

So they did this and they did that and they went low and came out high and they threw it across court and they dribbled hither and yon and one or two of them thought to look at the rim only to avert their eyes because they knew there was no way to get near it.

It went on for a minute and 10 seconds, which is an eternity when you’re down nine points in the championship game of the State Farm Holiday Classic. To get nothing done then is to surrender.

And it was then that the hundreds of Morton fans in the Illinois Wesleyan University arena made the kind of noise you don’t often hear at a basketball game.

The fans started cheering – for defense. They actually applauded – for defense. Every time a Potters’ defender denied an entry pass or forced a dribbler out of her lane or persuaded a ball-handler it was more fun to NOT have the ball than to have Potters making your life miserable – yes, whatever Marist wanted to do on that offensive possession, the Potters defenders said, “Nah, not here, not now, not tonight, not ever,” and the fans loved every great-defense moment of it.

When the Redhawks finally just flung the leather thing into the air – not a prayer as much as a brick – the Potters came downcourt quickly, the quickest of them, the little left-handed guard Peyton Dearing, finding a spot a half-step outside the arc on the right side, the ball coming to her there, and . . .

Dearing’s 3-pointer made it 55-43, and it caused me to scratch one word in my notebook.

Down by 10 points early, the Potters were on their way to a 17-point lead. They would win their 15th game without defeat, their 25th in a row reaching into last season. They would win the State Farm tournament for the second time in school history, an accomplishment that came with some apprehension among superstitious types. That’s because the Potters have won the state’s Class 3A championship in four of the last five seasons – failing to win it all only in that 2017-18 season when they won the big, beautiful golden ball trophy that State Farm gives its champions.

So, winning tonight is a bad thing?

No, no, no, certainly no if you ask Peyton Dearing.

And why not? Look, tonight they were on the wrong end of a 15-0 run that helped Marist to a 25-15 lead early in the second quarter. They were being beaten by transition fast breaks and 3’s. Even with their all-stater Sidney Affolter making only one field goal, the Chicagoans seemed to have Morton in trouble. (Speaking of defense, the Potters held Affolter to that one bucket and seven free throws. She’d scored 27 in the Marist victory over Richwoods. Lindsey Dullard and Courtney Jones did most of that defensive work with help from all hands in the area. It was a beautiful thing to see.)

Say again, a curse? Not really. The Potters demonstrated in this tournament that they are not only a good team, they KNOW they’re a good team. Ten points down? Big deal. It’s early. Pay attention, folks, they’ll be making a comeback shortly. It may be born of Dullard’s court sense. It was Jones defending against Affolter in Marist’s 70 Seconds Without a Clue. Dearing had ended the third quarter with a sprint for a curled-in layup. Then Katie Krupa took over with a pair of layups off nifty passes by Jones and Dullard to make it 59-45, four minutes to play, turn out the lights, the party’s over.

Once down by 10, now up by 14, Morton had outscored one of Class 4A’s best teams, 44-20, in 18 minutes. The Marist coach, Mary Pat Connolly, said, “We lost twice coming in, to Benet Academy and Chicago Simeon. Morton may be better than either of them. Their two bigs – Dullard and Krupa – were too much for us. And they had those two 3-point shooters – Becker and Dearing. Morton-Benet would be a great game.”

Morton’s coach, Bob Becker, loved his team tonight and said so, rarely pausing for breath between observations on its excellence: “We’re a great team . . . this is a gritty, tough group . . . resilient . . . awesome . . . kids stepped up . . . they’ve embraced every challenge.”

He suggested a new challenge.

“I think that only six times anybody has won the State Farm and won the State, too,” he said. “That’ll be their goal now.”

That said, he also said the CoachSpeak thing.

“We don’t want to push the fast-forward button,” he said. “We’ve got to keep working hard every day.”

Krupa led Morton’s scoring with 19. Dearing had 17, Dullard 16. Jones adnd Maddy Becker each had 6, Makenna Baughman and Maggie Hobson each had 2.