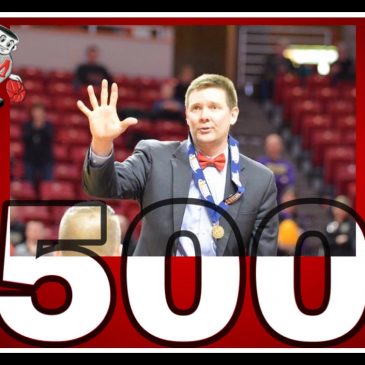 With 28 seconds to play, our favorite kidney-stone-passing girl, Peyton Dearing, rose off the Lady Potters bench and held high a huge portrait of our favorite 500-game-winning basketball coach, Bob Becker. Facing the bleachers, she signaled to the gathered fans that they should stand and cheer. And there rose in the Potterdome the chant, “Bobby B . . . Bobby
B . . . Bobby B.”

Bobby B, smiling, just sat on the bench.

Everyone else rose. Players, coaches, fans. All rose in applause for the coach who in his 21st season would win his 500th game.

And Bobby B sat there, head down, smiling, the sound washing over him.

“It’s about the administrators and coaches and players,” he said later. He called his wife, Evelyn, “the humbler and the motivator . . .the backbone . . . I love her to death,” and he said winning 500 games was a testament to “all the great parents and high-character kids.”

Only when the buzzer ended the game did Becker rise and embrace his assistant coaches, Bill Davis and Megan Hasler and Brooke Bisping.

Confetti of many colors flies to the ceiling and floats down, a Potterdome ticker-tape parade, all of it coming to rest on the coach’s shoulders. There’s a big poster board drawn up with huzzahs and hoorays – ‘‘BEST COACH EVER!” “500!” And the coach, because of all that coaching DNA, allows himself to say, “Awesome, awesome job,” before saying, “Team up,” meaning everybody come in, and there he says, “Be back here at 5,” because beating Lincoln was the first game of a two-game day and at 5, an hour and a half before a 6:30 tipoff with Galesburg, they would begin work on Bob Becker’s next 500 victories and the next celebration.

Wait one minute. His next 500? I don’t want to wait that long to do better than confetti poppers.

Now is the time to do it and do it right.

Honor the Beckers by naming the court for the coach and his wife.

Five hundred wins, four state championships in five years – I’d
say name me one other coach in Illinois history who has done that. But that’s an unfair question. Only Bob Becker has done it.

Bureaucracies have odd rules. I asked the Morton High School athletic director, Scott Jones, if there were a rule against naming the court for Becker. Like, did he have to be old and dead?

“Nothing that I know of,” Jones said. “It’d just be up to the school board.”

Well, to my ears that sounds like a suggestion to all the great parents of past, present, and future Lady Potters that they might want to text/email/snail-mail/call the school board president. His name is Shad Beaty.

Now, the basketball game . . . it was no game . . . the Potters are just too good for ordinarily decent teams . . . and they didn’t have their leading scorer, Lindsey Dullard (out with a concussion, return still undecided), or their sixth man, Raquel Frakes (out with a broken wrist, coming back Jan. 25) . . . they’re so good, in fact, it was 12-0 in fewer than four minutes today and 38-8 at the half.

Two little stories will do. The first illustrates the Potters’ defensive work that so often sets in motion their offense.

As a Lincoln ball-handler moved near the mid-court line, Bob Becker was off the bench shouting at his daughter, “Maddy, force her left, force her left.” The right-handed dribbler was forced left, forced into the low left corner of the court. There Olivia Remmert knocked the ball loose. It rolled to Courtney Jones. Jones sprinted with it the other way before passing to a Potter flying in from the right wing. The hustling Remmert wound up making the bucket. Only fair.

The second story was Peyton Dearing’s story. From 7 a.m. Friday until after 4 p.m., she was in an emergency room. A kidney stone? No one knew, they knew only, as she said, “it was the worst pain ever.” Only morphine stopped the pain. “They think she passed the kidney stone then,” her mother, Erica, said.

Wait. At 4 p.m. Friday, she passed a kidney stone?

Some of us who shall go nameless would have taken a month off, filed for disability, and told the boss to send our mail to the hotel in Bali.

“Peyton will want to play,” Bob Becker said Saturday morning, “and I’d be surprised if she doesn’t.”

Dearing was suited up today. She didn’t start because she didn’t practice Friday.

But with 4:31 to play in the first quarter, she entered the game.

Five seconds later, at 4:26, on a drive down the left side of the lane, she scored on a layup.

She didn’t take a month off. It was five seconds.

Afterwards, I asked how she felt.

Jones led Morton’s scoring with 13. Dearing, Katie Krupa, and Maddy Becker each had 11. Cailyn Cowley had 4, Makenna Baughman 3, and Remmert 2.