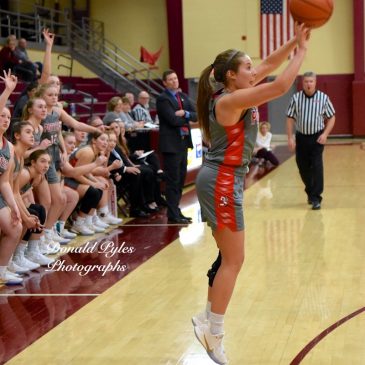 Sometimes you just want to hug ‘em all.

Tonight in the Potterdome was such a time.

They were as good as they could be.

And then, two minutes and 29 seconds into the second quarter, senior guard Maddy Becker went down with a knee injury.

She writhed in pain as play went away from her, going downcourt, leaving her alone on the floor until a timeout was called and her coach, her father, Bob Becker, walked the 50 feet to where his daughter held tight to her right knee.

The coach had been there before. Eleven months ago, Maddy went down in the sectional championship game with what turned out to be a torn anterior cruciate ligament. Surgery repaired it and nine months later she was again a starter for the Potters, again an outstanding 3-point shooter, again a team leader by act and emotion.

Then, on a drive down the right side of the lane, a collision, or a tangle, or something we might just call “basketball,” Maddy fell hard and immediately was in pain. As her dad held her hands, she told him it hurt worse than the one a year ago. “There wasn’t a ‘pop’ like last time,” the coach said. “She said it felt like ‘something slid over something.’”

She will go to an orthopedist in the morning. “Because there wasn’t a pop doesn’t mean anything,” Becker said. “It could be a slight tear. We don’t know. We’ll know more in the morning.”

What we knew tonight was that it hurt in every way these things hurt.

Peyton Dearing, another senior guard, may be Maddy Becker’s closest friend on the team. She was on the bench the minute it happened. When Maddy Becker had been helped off the floor and into the locker room, her dad came back to the bench. He sat in pale silence. Next to him, Dearing wiped away tears. Another senior, Courtney Jones, wrapped an arm around Dearing.

They’ve done it before. This is the third time for the coach/father. Five seasons ago, his older daughter, Josi, tore an ACL in the Potterdome. “It hurt me more than it hurt Josi,” he said that night. And yet, in March that season, the Potters won their first Class 3A state championship – and Josi Becker made a cameo appearance at the title game’s end, in uniform, on the court with her teammates. And last season, after Maddy was hurt, her teammates won another state championship.

Some basketball here, for a minute:

Sensational in all the ways they’re capable of sensation, the undefeated Potters won their 23rd straight game, raising the number to 33 if we count last season’s run to their fourth state championship in five years. They moved the ball effortlessly and with purpose aforethought. Their trapping zone press was a piece of basketball magic, as Becker had suggested on his coach’s whiteboard: “RELENTLESS PRESSURE.” The idea was to trap the ball-handler and force an escape pass to where the Potters would intercept it – the Potters playing chess while Bloomington played checkers.

Nobody did that magic better than Courtney Jones this night. The 5-foot-7 point guard has matured into a floor leader who combines basketball instinct and savvy in ways that make her at once an outstanding offensive player, defender, and rebounder. She scored 13 points in the first quarter as the Potters sprinted to a 27-7 lead. My favorite Jones moment: leaning over the end line, she slapped a rebound in-bounds, and then stole it from the Bloomington player who caught it, and then took two dribbles to the free throw line and knocked down a 15-footer. In the quarter’s last three minutes, she made two 3-pointers.

The air went out of the building.

I wanted to go home.

Maybe they wanted to go home, too.

Maddy Becker returned to the bench at the start of the third quarter. She wore an ice pack on the back of her right knee. The Potterdome spectators, those from Bloomington as well as Morton, gave her a nice round of applause.

When Becker came out of the locker at game’s end, the junior Raquel Frakes opened wide her arms and gave the coach a hug.

As Maddy left the building with her mother, Evelyn, I thought to talk to her. But Evelyn shook her head not now, and I just touched Maddy’s arm. There would be another, better time.

A half-hour later, Bob Becker stood near the scorer’s table. There he told Courtney Jones she had played very well, especially in that first quarter. He also said, again, that he would have to regroup, to get his mind right for the games to come. Jones, smiling, touched her head and said, “Jedi mind tricks!”

Becker thought of another movie. He said, “I’d rather be Mr. Miyagi in ‘The Karate Kid.’”

The karate master Mr. Miyagi healed injured students with an ancient energy-transfer technique, Moto-Ki, or, as Mr. Miyagi put it, “Smack hands together and rub.”

Jones led Morton’s scoring with 15. Katie Krupa had 14 and Makenna Baughman 10. Dearing and Cailyn Cowley each had 5. Maddy Becker had 4, Maggie Hobson 3, and Paige Griffin, Abby Steider, and Olivia Remmert had 2 each.