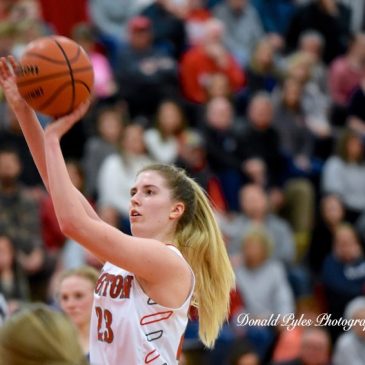 One of my grandma buddies turned to a new friend a row behind us. The woman’s name was Ilga. She’d never been to a Lady Potters game and had been whooping it up with every 3-pointer and every steal and everything done sensationally.

The grandma said to Ilga, “Isn’t this fun?”

And Ilga, her hands clasped, her face aglow, said, “That’s an UNDERSTATEMENT.”

OK. Now. You may want to turn down the volume. I’m going to go on an unholy rant.

I do not beg your pardon. I do not ask forgiveness. I don’t care. Some things need to be said. I’m not a coach, not an athletic director, not a principal or anyone who has power or influence in Morton High School and the Mid-Illini Conference. I’m an old man in the crowd, three rows up, taking notes to write a thing on his Facebook page. I’m here to say there was a coward in the Potterdome tonight. He wore a striped shirt.

I recognized his craven behavior 19 seconds into the third quarter.

I looked up “craven” to be sure I had the right word.

I never dwell on referees’ judgment calls. The game moves too fast for most of the middle-aged men with whistles. I figure the bad calls even out.

Not tonight. Tonight things must be said.

It was Morton 49-15 when Lindsey Dullard broke loose for a fast-break layup. A Limestone girl, with no chance to make a defensive play, chose to make a play that could have injured Dullard. With Dullard at full speed, the Limestone girl used both hands to shove her in the low back. The shove propelled the helpless and defenseless Dullard into the stage wall at the court’s end. Any number of bad things could have happened. A month ago, Dullard suffered a concussion when hammered to the floor on a driving layup.

This foul was so obvious and done with such shameless intent that even the man in the striped shirt saw it and called a foul.

Then he did the most craven thing of all.

He called it a one-shot foul.

Dullard, about to drop in a layup at full speed, was shoved from behind and thrown off the court. And you’re telling me that’s a one-shot foul?

And if the striped shirt had half the courage of Dullard, he’d have done what needed to be done.

He’d have called it a flagrant foul. Two free throws and the ball to Morton.

He would’ve ejected the Limestone player.

He’d have gone to the Limestone bench. There he would have said, “Any more of that, Coach, and you’re putting your team on the bus and going home. This game will be over.”

The play itself was of no great moment other than it foreshadowed in a real, sad way what happened less than a minute later.

Morton’s lead was 52-15 after Courtney Jones made a beautiful lob to Raquel Frakes for a perfectly-executed alley-oop layup at 7:14 of the third quarter.

On Limestone’s ensuing possession, Frakes batted the ball loose at mid-court and was about to dive for it when she felt it happen.

“I’d planted my right foot,” she said later, “and a Limestone girl hit my left knee and we fell.”

What I saw, from three rows up, was what the football people have decided is an illegal block. The football people! Football doesn’t allow it. But here came a Limestone player hurling herself at Frakes’s knees. It wasn’t an obvious intent to foul, as on the Dullard layup. Things happen in a basketball game. It’s a contact sport as much as it isn’t. But I’m on a rant and I’m here to say the Limestone girl would not have hurled herself into the pile-up if the referees had used their power and influence to keep the game under control earlier. Limestone is a mediocre team, Morton is a great team now 30-0. It was never a contest, and, sad to say, in such games the weaker team tries to make up for its lack of skill by resorting to hacking, clawing, bumping, shoving defenseless players, and throwing themselves after loose balls.

And there lie Raquel Frakes in pain. Groping at her right knee.

A man behind me in the bleachers said, “I heard it pop.”

I heard that pop. I hoped I hadn’t. I hoped it was Frakes’s knee slamming against the court.

“Four times,” she said later. Four times she heard a pop. The player her coach calls “the best sixth man in the state of Illinois” was carried off the court by assistant coach Megan Hasler and athletic trainer Katie Gavin. She returned to the bench late in the third quarter. She will be examined by an orthopedist in the morning. Best case: a sprain. Worst case: a torn ACL, which would be the second suffered by the Potters, coming three weeks after Maddy Becker went down.

The injury came in Frakes’s first start of the season. She replaced Peyton Dearing, who sat out as she recovered from a second round of kidney stones refusing to pass. Frakes was injured even as five Potter reserves waited at the scorer’s table to be waved in.

A minute later, 6:07 of the third, the Potters’ coach, Bob Becker, screamed at a referee, “TIMEOUT!” It was not Becker’s first scream. He pointed that out to the referee, who had been the referee on the Dullard play and who shouted back, “Didn’t hear you, Coach,” which may have caused Becker to wonder aloud how a man both blind and deaf had earned his striped shirt. And maybe that man somehow heard Becker’s second remarks because he T’d up the coach there. Brave of him at last.

The Potters were as good as they could have been tonight. “Great energy and enthusiasm,” Becker said. “We played basketball the way it should be played.” They moved the ball unselfishly, getting it to the right shooter at the right place at the right time. Defensively, they gave Limestone not an inch of breathing room whether in the paint or 35 feet out. I’m not overstating it when I say it could have been 100-to-freakin’ zero. It was 35-3 at the quarter, 49-15 at the half and 52-15 when Frakes went down a minute into the third. After that, nothing much mattered except getting out of there alive. Limestone had 22 fouls, Morton 8.

“Man, that was fun to watch,” Becker said. “And in the locker room later, we had a group hug.” Here the coach spread wide his arms, as if hugging each and every Potter in the room. With a smile: “And I don’t care how awkward that was.”