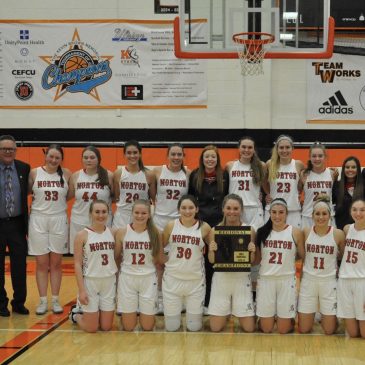 From the left arc, midway.

From the left arc, high.

From the deep left corner.

Suddenly, the Potters finished an 18-0 run with three exclamation points of the kind that get your heart to going pitty-patter even as they tell the befuddled opponents that, yes, it used to be close, 9-8, but now, 5 1/2 minutes later, you’re behind, 27-8, and you know it’s going to get worse before it’s over and someone hands a regional championship trophy to the Potters for the sixth straight year (and 10 out of 11). Next up for Morton: a sectional semifinal against Peoria Richwoods at 6 p.m. Monday in Rock Island.

Even more dispiriting tonight, if you’re Washington, you know you’re not behind because the Potters are one of the best long-range shooting teams in the heartland. (A dozen Potters have made 3’s this season, and half of those shooters are capable of multiple 3’s any night.)

Washington was behind because Morton’s defense is sensational. Again, as they’ve done so often in this 33-0 season – when they’ve stretched their winning streak to 43 games – when they’re chasing a fifth state championship in six years – again, the Potters rendered another team’s offense inoperable, kaput, and also dead. The raucous Morton crowd sent up rounds of applause FOR DEFENSE. And tell me when you last heard of such a thing in girls’ high school basketball.

That applause came in the first minute of the second quarter when Morton’s man-to-man was so tight, so aggressive, so smart in anticipation and helping and hedging that Washington could get nothing done except toss the ball to somebody who might seem open but really wasn’t. And so a guy making notes of the defensive work comes now with a grocery list of the ways the Washingtons failed to score for the last three minutes of the first quarter and first seven minutes of that second quarter. Here’s that list:

So, for 10 minutes and 2 seconds which must have seemed like days without end, the Washingtons were shut out and Morton’s lead grew to 29-8 on the evening’s most unlikely bucket.

Not an elegant, slashing drive to the rim.

No, no, what Olivia Remmert did to cap the Potters’ 20-0 run was so, so much more fun than that.

She’s a 5-foot-6 senior who comes off the bench, mostly for defense. She’s steady in the man-to-man and a pest as well, deflections here, anticipatory steals there.

That said, I prefer tonight to make a big deal out of her one bucket in this game. For all the truth in what Lindsey Dullard would say later – “We started playing our game midway in the first quarter and into the second quarter” – the one undeniable signal that it was Morton’s night came on the Remmert bucket.

The left-hander moved with the ball from the right side of the lane across the paint. With nowhere more to go, she went up for a shot – only she had such momentum on the drive that she found herself flying toward the middle block along the left side of free throw lane.

“A prayer,” is what the smiling Remmert more properly called it.

As she sent up the prayer, with no good look at the rim, Remmert knew better than to expect a divine answer.

Until she heard the crowd’s roaring . . .

Yep. Went in. When you’re good enough to be good, you’re sometimes good enough to be lucky. All that mattered was that Remmert’s shot sailed truly over the iron and smoothly through the net. Someone in the crowd, and his voice sounded like mine, said, “She MEANT to do that.”

So it was 29-8 with 2:39 to play in the half. Soon enough it was 38- 12 late in the third quarter. And I cannot pass on the fourth quarter without describing – trying to describe – one more basket, this one by the little guard Peyton Dearing, who found herself with the ball under the hoop when Dullard had lost it in a collision.

Dearing doesn’t belong in the paint except for those mini-seconds when she flies in on a fast break.

“There was the ball,” she said, “so I just scooped it up.” Her back was to the baseline, her feet among fallen bodies all around her, and the left-hander did a Remmert kind of thing. She just tossed the ball toward where she imagined the rim might be.

Did she even see the rim?

But when you’re good, you can get lucky.

Afterwards, coach Bob Becker had nice things to say about everyone. And I’m here to say Lindsey, Lindsey, Lindsey. “She’s first-team all-state,” Becker said, “and she may be one of the top 3 players in all of Illinois.” Who wants to argue that? Not only is the 6-foot-1 senior an offensive threat inside and out, Dullard has become an outstanding rebounder and defender all over the court. “She always wants to guard the other team’s best player,” Becker said, and tonight Washington’s best player paid the price for a game against Morton. “I think she got 3 points,” Dullard told Becker, and, yes, it was three.

Dullard and Dearing each had 14 points tonight (each with two 3’s). Katie Krupa had 10, Maggie Hobson 6 (on two 3’s), Courtney Jones 3, and Remmert those two that came just the way we knew they would. Sure.